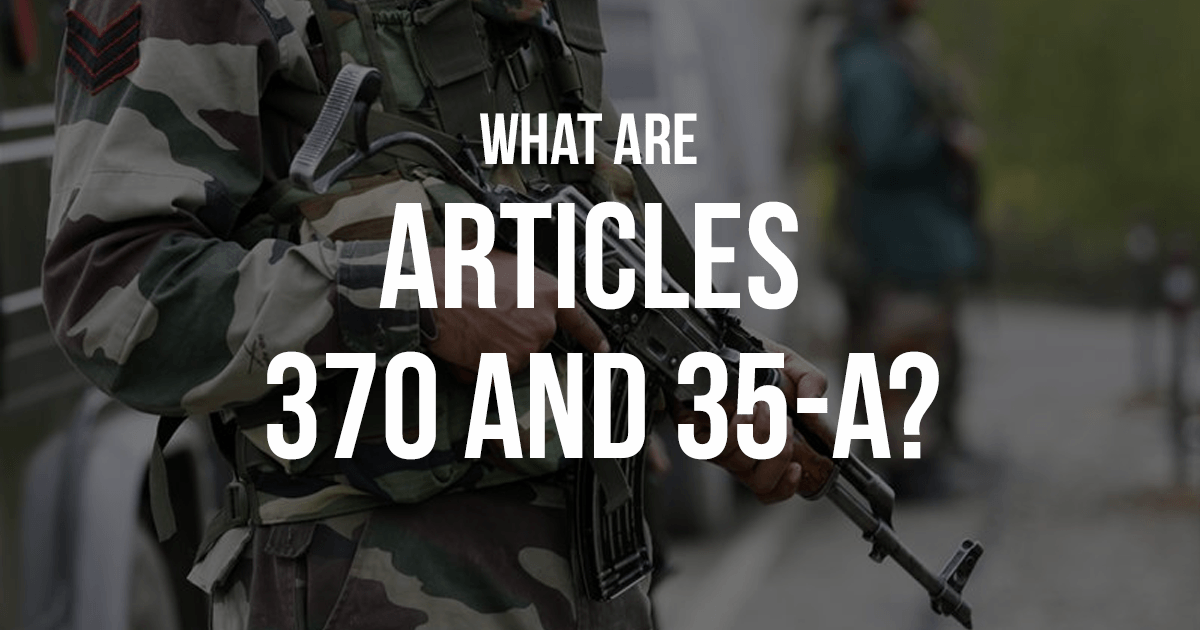 The Modi led Bhartiya Janta Party government is India has made its move to remove Kashmir’s special status under Article 35-A of the constitution.

India’s interior minister Amit Shah has moved a resolution to abolish Article 370 in the Rajya Sabha, which would automatically abolish Article 35-A. Only a Presidential signature remains to complete the procedure.

The move is being seen as a long coming design of the Hindu nationalist government under Modi, who commands a stronger parliamentary majority than before in his second term.

But what exactly is the “Special status” that Article 35-A entails?

Article 35-A was conceived by the understanding of the then Prime Minister Jawaharlal Nehru and Kashmiri leader Sheikh Abdullah. It was then added to the constitution through a presidential order under Article 370(1)(d) in 1954.

Through article 35-A, Indian Occupied Kashmir was recognized as an autonomous part of India.  IOK was allowed to have its own flag, its own constitution and its own assembly.

The government in India is autonomous in all matters that concern it, except for defence, foreign affairs and communications which are to be controlled by the central government.

This means that the state’s residents lived under a separate set of laws, including those related to citizenship, ownership of property, and fundamental rights, as compared to other Indians.

However, the most significant aspect of Article 35-A is how it defines a permanent resident of Kashmir. Only those who belong to Kashmir have the right to own and buy property in the state through this article.

In this way the article protects IoK’s distinct demography and ensures that it remains India’s only Muslim-majority state.

Revoking it would mean people from all over India will be able to buy property and settle in India.

What does revoking Article 370 mean for the Kashmiri people?

It opens the floodgates to Indian settlers, who can now purchase land and acquire property in Kashmir. This West Bank formula is one of the Sangh Parivar's oldest agendas: bulldozing a Hindu majority into the Valley.— Asad Rahim Khan (@AsadRahim) August 5, 2019

Therefore it is plainly understandable, that scraping Article 35-A is an attempt to make a demographic change in IOK that turns the Muslim majority state into a Hindu majority one.

This would add a new dimension to the long standing Kashmir dispute between Pakistan and India, as Pakistan maintains that Kashmir was unlawfully snatched by India despite being a Muslim majority region at the time partition.

A case regarding the article is already pending in the Indian Supreme Court, which claims that proper procedure was not followed in adding it to the constitution.

Modi’s government is making the changes that could lead to more bloodshed in the valley amid a troop surge, curfew and communications blackout.

“Amit Shah is rectifying the historical blunder of Jawaharlal Nehru,” A BJP Pralhad Joshi leader told the opposition benches during the debate in Parliament.

Observers are also arguing that the revoking the article means India has accepted that its presence in Kashmir is nothing but a military occupation. Something the residents have always known.

Rahat Fateh to be given honorary Oxford University degree