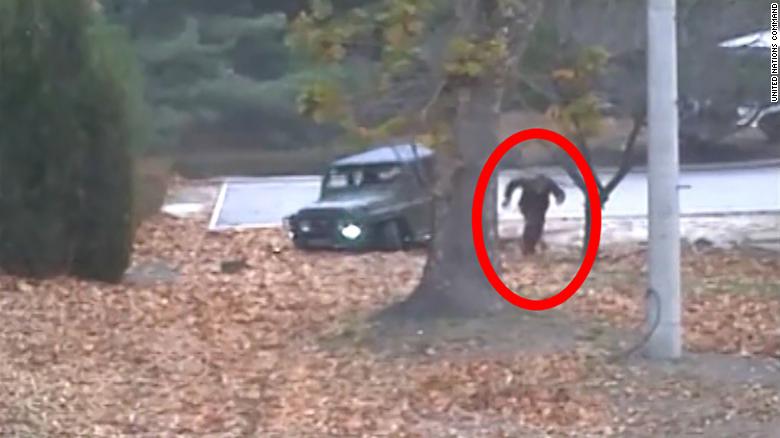 Dramatic video showing a North Korean soldier fleeing across the border into South Korea while being shot at by his fellow soldiers was released by the United Nations Command Wednesday.

This is the first time when such a video has been released. In the footage, it can be seen that the defector used a military jeep to speed across the buffer zone. He stops his vehicle meters before the demarcation line where his comrades started shooting at him. One North Korean soldier even crossed the DMZ but turned back immediately and took cover, probably due to the warning shots fired by the South Korean soldiers.

However, the defecting soldier was shot several times in his successful escape attempt and fell to the ground. The South Korean soldiers crawled up to the injured soldier and carried him to safety. He was flown by a U.S. military helicopter to a hospital in Suwon, south of Seoul. “He is fine, he is not going to die.” lead surgeon Lee Cook-Jong said at a press conference.

By firing across the DMZ at the defector, North Korean soldiers violated the Korean War armistice, said the UN Command, which oversees the 64-year-old ceasefire agreement. One North Korean soldier also crossed the military demarcation line (MDL) — another violation of the armistice that paused the Korean War in 1953 — said Col. Chad Carroll, US Forces Korea public affairs director. A peace treaty formally ending the war has never been signed.

Carroll said that the UN Command had notified the North Korean People’s Army of the violations via regular communication channels and requested a meeting to discuss the results of the UN investigation into the incident as well as measures to prevent future such violations.

“The armistice agreement was challenged, but it remains in place,” Gen. Vincent K. Brooks, the American who leads the UN Command.

Gender war in India: Who is fighting whom?

Federal govt proposes a meagre increase of 4.7% in defence budget