The government of Pakistan and Young Doctor's Association have locked horns horns over the MTI Act and neither seems to be budging. Doctors have boycotted OPD's and the government warns action. In all this drama, who suffers the most, poor patient. 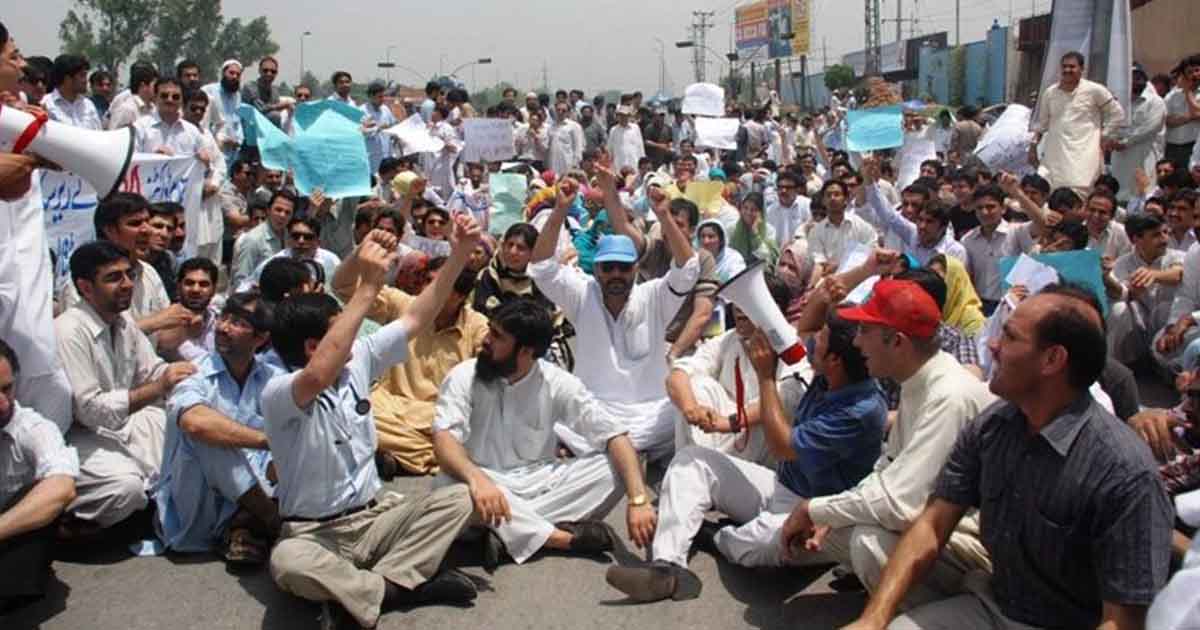 MTI ordinance passed without discussion by National Assembly besides 10 other ordinances by negating the spirit of parliamentary democracy. The legislation is not considered a cornerstone of the incumbent regime in Pakistan and it’s not a new trend here. 1.2 million patients were denied treatment during a strike in Punjab and the government sought action against 65 postgraduate trainees, drafting a new rotation policy to transfer senior medics from Lahore.

The Medical Teaching Institutions (MTI) Ordinance is to enable improved and modern management of public sector hospitals. There is no privatization but it is part of public sector hospitals’ reform plan. Proper check and balance on private clinics is also important. The hospitals will remain Govt hospitals. Better managed hospitals will mean better facilities for patients according to the government but the opinion of medical community is harsh and opposite.

The doctors, pharmacists, nurses, paramedics, and allied health professionals had been boycotting duties in indoor wards besides continuing withdrawal of services from Out-Patient Departments (OPDs) and Operation Theatres (OTs) and Central Laboratories for all elective procedures against enforcement of Punjab MTI (Reforms) Act 2019. Thousands of patients were being deprived of treatment of minor operations, consultation, diagnosis and treatment of their ailments and injuries on a daily basis, while the worst hit were those who had been traveling from far-off districts to reach the mega teaching institutions only to be disappointed due to lack of availability of required treatment in hospitals.

However, an extraordinary rush of patients and their attendants had been witnessed in emergency wards of all hospitals, where consultation services were also being offered to OPD patients. Several patients had to go to private hospitals for elective procedures, which puts an extra financial burden on poor patients.

Protestors termed the MTI Act an attempt to privatize public sector hospitals in the province. The notion being departed is not completely wrong. The system of management is not holistically supportive. Partially acting upon the act, fees for various tests would increase like private sector and effects can be realized now too.

The government had made no efforts in engaging the GHA for bringing all the stakeholders on the table to negotiate a mutually agreed way out for resolving this issue. So, the court has to sort out the plight by intervening in the issue.

The young doctors actually derived the momentum since seeking repeal of the MTI Reforms Act 2018. Protestors set many deadlines for the Punjab government to accept their demands. Doctors also threatened withdrawal of services from emergency departments, general and dengue wards.

Due to the closure of OPDs, patients thronged emergency departments of the hospitals and mostly had to turn to private clinics. Though senior professors and doctors had been deputed in OPDs, they remained absent from their duties with the blame of patronizing young doctors.

The hospital’s administrations tried to manage the things but failed to cope with the situation.

Two-way accountability must be ensured. The hiring of new doctors, a doctor with the junior level of experience should not be appointed over the seniors

Strikes badly affected the health services at the hospitals in Punjab and Khyber Pakhtunkhwa (KP) and strikes in KP have also been called off after 47 days.

Some senior doctors were supporting the young doctors’ strike as they too would suffer a lot after implementation of the MTI Reforms Act 2018. YDA President insisted that strike would continue until the government accepted their demands otherwise resistance would be showed. Both Government and protestors were adamant to their stance which was wrong for the poor.

Some government hospital administration under pressure in Rawalpindi had started taking revenge from doctors, especially female ones. Some medical superintendent threatened female doctors to join duties with the threat of punitive action against them.

YDA must raise voice for their rights but boycotting duties is totally awful. They did not need to create problems for poor patients. In fact, they needed to protest for the rights of the patients along with fulfilling their duty hours as the government would charge a fee from every patient in the coming days as being following the Government-cum-Private Partnership setup under MTI Act.

Strikes were held against the ordinance and professionals refused to perform their duties including radiological and pathological services in major teaching institutions in Lahore, Rawalpindi and other districts of Punjab. According to the YDA, merely in October over 50,000 elective surgeries and around 100,000 diagnostic tests postponed due to the closure of OT’s and central laboratories in all major teaching hospitals in the province.

Meanwhile, health authorities and hospital administrations claimed that health services were being provided at OPDs with the help of consultants and administrative doctors which was just an eyewash yet it had been reported that the absence of OPD services was preventing thousands of new admissions in indoor wards in hospitals.

According to reports, the Punjab, KPK and federal governments had directed hospital administrations to prepare lists of doctors, nurses and paramedical staff who were obstructing the smooth delivery of healthcare services. Mistakes were made at both ends. Governments were unable to reconcile the situation and protestors also crossed the line. Certain measures could solve the matter including; MTI Act must be implemented but after the approval of security legislation and by completely taking into confidence all the stakeholders.

A point must be included that the decision of the board to fire or punish someone should be challengeable before a separate board. If the doctor or any health professional is not found guilty, the board officer making the point should be removed from the board. Whether he is the chief. Two-way accountability must be ensured. The hiring of new doctors, a doctor with the junior level of experience should not be appointed over the seniors.

Lastly, there should be a hospital director, medical director, pharmacy director, nursing director, finance director along with two persons nominated by the board on the recommendations of the Dean in teaching hospitals along with representation for all in the management committee and services sectors too. Hospital models like Shaukat Khanum can be adopted but after complete redressal of all stakeholders.

Dr.Zeeshan Khan is an analyst, activist, commentator, life trainer, a contributor to the Op-Ed pages of different newspapers and doctor at CMH. He tweets at @DrZeeshanKhanA1 and can be reached at dr.zeeshan.alias.ghazikhan@gmail.com. The views expressed in this article are author’s own and do not necessarily reflect the editorial policy of Global Village Space.

How many people have been arrested for violating lockdown in Sindh?

Now You Can Grow Your Teeth Back