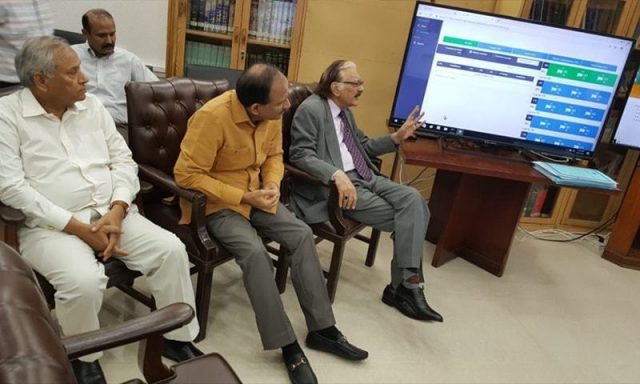 The Election Commission of Pakistan (ECP) has uploaded the Form-45 from all the constituencies across Pakistan on its website.ECP has uploaded 170,000 Form-45 on its website. After much criticism and allegations of rigging from 11 political parties, ECP was under pressure to prove the transparency in the electoral process.

It has responded in the best way possible by uploading all the Form-45’s from 85,000 polling stations established across Pakistan for general elections 2018 held on July 25. It can frustrate the grand opposition alliance in its bid to make the July elections as murky as possible.

What really happened on election night?

On Election Day, ECP and NADRA faced a major embarrassment after the controversial collapse of newly created and apparently untested Result Transmission System (RTS) on Election night. The question remains, did the RTS really crash? Or was it a deliberate effort from certain elements to sabotage the election process.

NADRA’s role in the whole process has become very suspicious. What’s more important in this regard is the controversial re-appointment of NADRA chairman Usman Mobeen

Because NADRA claimed that RTS never crashed and “it received results from around 50 percent of polling stations before the commission directed its officers to stop using RTS.”On the other hand, ECP blames NADRA for this failure as it controlled the system. For example, NADRA teams went up to the offices of Returning Officers to activate the RTS software and were directly involved in all the technical work.

NADRA’s role in the whole process has become very suspicious. What’s more important in this regard is the controversial re-appointment of NADRA chairman Usman Mobeen on February 06. His appointment created quite a stir after allegations of nepotism and favoritism against him surfaced after a change in the selection criteria of the NADRA chairman was changed to facilitate his re-appointment.

What is RTS and why was it used in Elections 2018?

In December 2017 and January this year, ECP successfully used an amateur Android app to conduct by-elections. Following this development, NADRA signed an agreement- worth Rs150 million with ECP to prepare RTS for general elections 2018. NADRA completed work on RTS at the end of May and it was tested in June and July.

It appears that app was not tested as per the requirements under the international standards. Moreover, RTS is an android application which was supposed to enable election officers to send the results to the ECP via Nadra database in real time. So, RTS was NADRA’s responsibility and ECP had no control over its operational capability.

Why would ECP intimate the Public about this development, when even the independent media reporters and observers could witness first hand that results had stopped showing on ECP’s website

But after the much-criticized debacle, certain NADRA officials rather ridiculously blamed ECP for announcing on National TV that RTS has crashed, when it was still up and running. These NADRA officials may have used the popular and reputed English Daily (Dawn) to blame and malign ECP over RTS failure. However, the very next day of this story being published, NADRA officially refuted these rumors and Dawn had to retract from its position taken previously.

Read more: Failure of RTS on Election Day under investigation

Who benefits from the failure of RTS?

The RTS software was installed in the smartphones of all Presiding Officers (PO) who were directed to transmit Form 45 (containing tabulated results of the polling station) from their individual polling station to the ECP headquarters using their respective mobile devices.

Long before the formal announcement from ECP, political parties lambasted ECP for not providing the Form-45’s to polling agents in various constituencies cross Pakistan.

Even transfer of the Form-45 at night was performed under the strict supervision of the Army. It is the reason why ECP was able to upload the Form-45 on its website in under two weeks after the Election Day.

Despite, the laudable efforts of ECP, it came under a barrage of criticism over negligence. Much to its relief, major independent observers including Free and Fair Election Network (FAFEN), and European Union Election Observation Mission (EU EOM) showed satisfaction with the electoral process on the Election Day.

However, the Grand Opposition Alliance and international media coverage are looking to thwart its efforts to ensure the public that it [ECP] acted within the constitution and ensured the free and fair elections as stipulated under the law.

Long before the formal announcement from ECP, political parties lambasted ECP for not providing the Form-45’s to polling agents in various constituencies cross Pakistan. According to the instruction manual, polling agents were only supposed to hand over the copies of Form-45 after sending the results through mobile phones.

Since PO’s failed to deliver the results and did not hand over the Form-45 to all the polling agents, political parties started crying foul over the issue and the entire electoral process became controversial. ECP refuses to give up, asks Cabinet Divison to probe NADRA’s failure to handle RTS

Following the allegations from certain NADRA officials, ECP has directed the Cabinet Division to investigate alleged RTS failure. ECP has said that “Cabinet Division should form a committee comprising technical experts from National Telecom and Information Technology Security Board (NTISB) and the Pakistan Telecommunication Authority (PTA).”

Political parties have blamed ECP and military establishment over election rigging. While, on the other hand, ECP has blamed the technological failure of RTS for the delay in the release of election results. While NADRA alleges ECP announced to stop the use of RTS for unknown reasons-which looks a rather inept and utterly ludicrous claim.

ECP’s decision to upload the Form-45 is commendable and it should clear the controversy to some extent. But the defeated status quo parties are in pursuit of their own vested interests and are looking to put the entire system online.  Going forward, a high-level investigation team should be allowed to investigate the record in NADRA to make the real culprit accountable for their actions.

One key question which must be asked from all those loathing and condemning the fairness of the 2018 elections is that why did ECP never publish the Form-14 [whose new version is Form-45] in 2013? Does it not show the credibility and transparency of elections as ECP was able to publish them in less than two weeks in this election? Who stopped ECP from publishing Form-45 in 2013, if the elections were fair?

Why SC did not disqualify PM Imran Khan?