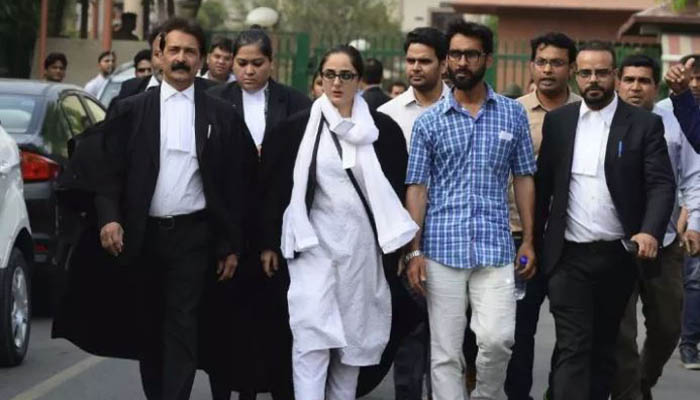 India’s Supreme Court on Monday ordered the trial of eight men accused of the rape and murder of an eight-year-old girl to be moved out of IHK after her family and lawyer said they faced death threats. The girl, from a nomadic Muslim community that roams the forests of Indian Held Kashmir, was drugged, held captive in a Hindu temple and sexually assaulted for a week before being strangled and battered to death with a stone in January.

Her case caused a wave of revulsion around India but also exposed communal divisions after two former ministers of the ruling Bharatiya Janata Party joined a rally in support of the eight accused, saying they were innocent. All of the accused are Hindus. One is a retired local government official and two are police officers. The victim’s relatives said they feared retribution if they pursued her case in the small town of Kathua, near where the girl was killed.

A bench of the Supreme Court headed by Chief Justice Dipak Misra said the trial would be held in Pathankot in the neighboring state of Punjab, and in-camera so that witnesses could be assured of protection. “We are transferring the case to Pathankot from Kathua for a fair trial,” the court said in its order.

The Kathua case has become a flashpoint in India where women often face horrendous atrocities. Called the rape capital of the world by some, India has become notorious for anti-women crimes like rape and harassment.

The case will be heard daily so that an early verdict can be reached, in a country where such cases can run for years, or even decades. India introduced the death penalty for rapists of girls below the age of 12 last month in response to the outrage over the gang-rape of the girl in Kathua. The law does not apply retrospectively.

The Kathua case reignited memories of the similarly brutal gang rape of a woman on a Delhi bus in 2012 who later died of her injuries. The 2012 case also led to the toughening of laws to deter crimes against women, but a rape epidemic shows no sign of dying down in part because the investigation of such crimes is still inadequate and convictions rare. Often the accused are powerful.

“The basic concern is fair trial, basic concern is speedy trial. That is the reason the court said there will be day-to-day hearing,” said Deepika Singh Rajawat, lawyer for the girl’s family, who cannot be identified under Indian law. Rajawat had said she herself faced the risk of personal attack for taking up the case of the girl.

The Kathua case has become a flashpoint in India where women often face horrendous atrocities. Called the rape capital of the world by some, India has become notorious for anti-women crimes like rape and harassment. A second girl was raped and set ablaze in the eastern India state of Jharkhand, a day after another teen was gang-raped and later burned to death by her attackers after they were fined for the assault.

Her case caused a wave of revulsion around India but also exposed communal divisions after two former ministers of the ruling Bharatiya Janata Party joined a rally in support of the eight accused, saying they were innocent.

The gruesome attacks are the latest in a long line of well-publicized sexual assaults that have prompted protests and demands for more stringent laws across the nation of 1.3 billion people. Police said the latest victim was in critical condition with burns over 95% of her body after being raped by a local youth Friday near a police station in Pakur. Police learned about the attack Saturday after a relative of the victim filed a report.

Police Chief Shailendra Prasad Barnwal said the suspect had a history of attacking the 17-year-old girl. He said the two cases did not appear connected. In the earlier case, police said the 16-year-old was raped and then burned to death Thursday in Rajatenduwa. The girl’s family was in the village to take part in a marriage ceremony when she was forced into a nearby forest and assaulted, police said.

Before that, a tourist who traveled to India to tackle her depression was drugged, raped and beheaded before her corpse was left hanging upside down in a forest. Local police revealed Liga Skromane was lured by two men who then sexually assaulted her before butchering her body. The suspected attackers – who are now in custody – are local drug dealers. One reportedly has a history of sexually abusing men and women.