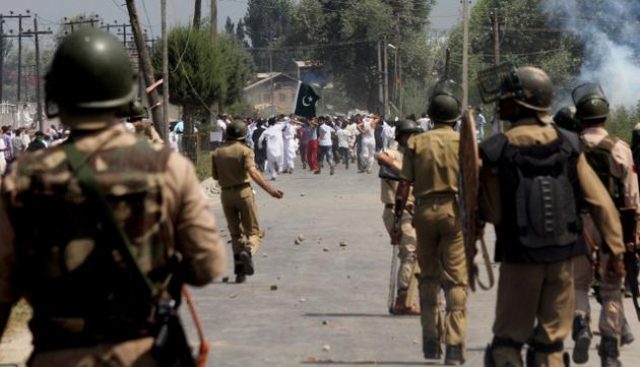 Torture, rape, psychological oppression, vandalizing of property and enforced disappearances are few methods of a sustained terror campaign unleashed by the state of India after violence broke out in the valley in 1988.

Lately, an upsurge in ruthlessness has been witnessed in the terror continuum of the Indian state, the pellet gun is the latest entry into war resource of the oppressive nation-state. Nearly twelve hundred (1200) youth have been blinded completely in last two years and around twenty-two thousand (22,000) have received pellets in one eye, partially damaging their vision.

The systematic use of rape as a weapon of war in Jammu and Kashmir has become a potent weapon deployed to crush resistance to the state.The report further mentions sexual violence against children, both male and female. The Support Group for Justice for Kunan Poshpora Survivors and JKCCS in 2018 compiled cases of 143 cases of sexual violence, mostly by armed forces, among whom 17 are minors.

The decade of 90’s was almost like same where numerous large-scale massacres in Gaw Kadal (1991), Bijbehara (1993), Nandi Marg (1998) were perpetuated by the Indian state to break the people’s will but it yielded no desired results.

With the high handedness of the security forces on the rise, the reaction from local population has also intensified. With no political space available for any activity, the state has yielded space to Tehreek-e-Sangbaaz (Stone-pelters Movement) that is making its presence felt in almost every encounter in the Kashmir Valley.

Few weeks back in district Shopian of South Kashmir, nearly 20 young boys, mostly civilians were killed who had a head-on collision with the Indian security forces engaged in an encounter with the freedom fighters. This has become a new phenomenon in Indian Occupied Jammu & Kashmir where every such encounter is met with stiff resistance from the youth who charge security forces with stones and get killed in retaliatory fire.

The decade of 90’s was almost like same where numerous large-scale massacres in Gaw Kadal (1991), Bijbehara (1993), Nandi Marg (1998) were perpetuated by the Indian state to break the people’s will but it yielded no desired results. It seems that the Indian state has reverted back to its aggressive measures of 90’s but to no avail as an unprecedented resistance is being put up by the people.

A very dangerous trend has been noticed lately in Indian state’s handling of the situation inside Kashmir, this being the perpetuation of hostilities against civilians on religious lines which is creating ruckus in the Muslim population of India as well. A recent encounter in Srinagar saw the first Muslim youth from mainland India getting killed in Kashmir alongside two other local rebels. The anger that is brewing up in Muslims of India and Kashmir as against a certain treatment of Islam by the state is a worrying sign; the behaviour of Indian has busted the myth of Indian secularism in broad daylight.

The resolution of the conflict may wait for sometime but the worsening human rights situation across the erstwhile state of Jammu and Kashmir calls for immediate fire fighting.

Recently, an eight-year Muslim girl was raped repeatedly in the Hindu majority Kathua district of Indian Occupied Jammu and Kashmir. For first two months, this incident didn’t get any attention in the media but after the Jammu Bar association started siding with the rapists on religious lines, a storm unearthed in the civil society that suddenly brought the conscience of Indian society to life. The BJP ministers in the cabinet and numerous other RSS ideologues not only threatened the minority Muslim population but celebrated the rape as an act of vengeance against Muslims of Kashmir who didn’t vote for BJP.

The narrative of the Indian state regarding Kashmir has had its critics in the past, most of them from civil society and secular intelligentsia but state has curtailed their funding and space, it has now become very difficult for them to speak truth on Kashmir.

This hostile environment in India has resulted in an almost permanent alienation from New Delhi and any scope of dialogue with the state has almost diminished. The possibility of large scale massacres and rapes in now on all time high, the incidents of Shopian and Asifa being two important examples of this.

With the entire youth up in revolt against forcible occupation, the forces in order to divert the attention from Kashmir Valley have opened new fronts on the Line of Control which has resulted in almost 32 killings of civilians on Pakistani side this year.

Nearly twelve hundred (1200) youth have been blinded completely in last two years and around twenty-two thousand (22,000) have received pellets in one eye, partially damaging their vision.

The situation in Kashmir deserves immediate attention. The resolution of the conflict may wait for sometime but the worsening human rights situation across the erstwhile state of Jammu and Kashmir calls for immediate fire fighting.

The most shocking fact of all is the shameless silence of the international media and the international community over the atrocities and human rights violations being carried out by the State of India, headed by Hindu-extremist political party BJP. Despite the Indian state’s violations of international conventions, global powers of the West, including the US and European states purposefully are ignoring the plight of the Kashmiri people for their own vested interests with India.

Mr. Muhammad Taimur Khan is a freelance journalist. He holds an M. Phil Degree in International Relations from  National Defence University, Islamabad. He wrote many research articles, Policy Briefs, Issue Briefs, Book Reviews and Monographs on topics related to International Relations. The views expressed in this article are authors own and do not necessarily reflect the editorial policy of Global Village Space.

The more you tell lies the easier it gets: Sound familiar?