Engin Altan Duzyatan is popular for his character of 'Ertugrul' in Turkey, across the world, and now in Pakistan. His overpowering performance of a ruler and warrior 'Ertugrul' in the series made him an absolute rage globally.

He is popular for his character of ‘Ertugrul’ in Turkey, across the world, and now in Pakistan. His overpowering performance of a ruler and warrior ‘Ertugrul’ in the series made him an absolute rage globally. Moreover, fans in Pakistan are in awe of his captivating performance. Altan has resurrected the forgotten Muslim warrior Ertugrul of Turkish history through his convincing performance. 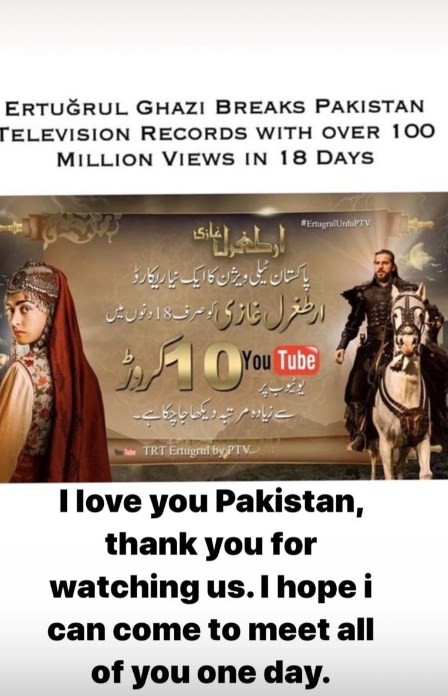 Engin Altan Düzyatan is a Turkish film and television actor. He is best known for his role as “Ertugrul”. He made his screen debut in the television series Ruhsar and went on to appear in Yeditepe İstanbul, Koçum Benim and Alacakaranlık. In 2007, Düzyatan appeared in the series Sevgili Dünürüm with Haluk Bilginer, Sumru Yavrucuk and Nevra Serezli. Following that he appeared in films Cennet (2008) and Mezuniyet (2009). In 2009, he played Doctor Serdar Batur in the series Bir Bulut Olsam with Melisa Sözen and Engin Akyürek, written by Meral Okay.

Düzyatan acted in the films Romantik Komedi, New York’ta Beş Minare and Bir Avuç Deniz in 2010. He hosted the game show Canlı Para which is Turkish version of The Million Pound Drop Live on Show TV in 2010 and 2011. From 2014 until 2019, he has starred in the TV series named Diriliş: Ertuğrul in its namesake leading role on TRT 1. He has also been featured in 2020 in ‘The Muslim 500 Publication’ as one of the most influential Muslims.

Cengiz Coskun who played Turgut Alp in the Turkish series, Dirilis Ertugrul expressed gratitude to Pakistani fans for profuse appreciation. He also expressed his wish to visit Pakistan one day in an Instagram post.

Cengiz Coskun and Engin Altan Duzyatan followed lead actress Esra Bilgic of Dirilis Ertugrul to thank Pakistani fans for an overwhelming response. Esra Bilgic played the character of ‘Halime Sultan’ in the Turkish serial, Dirilis Ertugrul said she is excited to meet her fans in Pakistan. She expressed her wish during the exchange of comments with a Pakistani fan on Instagram. 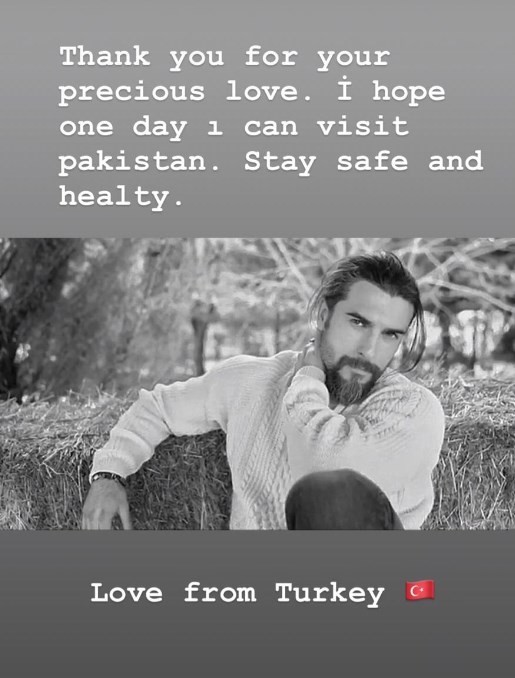 In her comment, she thanked for the love and appreciation she is receiving in Pakistan. “I would like to say thank you with all my heart for your precious compliments. Your support makes me happy.” In another comment, she said, “lots of love from me to Pakistan.”

A Pakistani fan informed how the serial Dirilis Ertugrul has smashed popularity records in Pakistan. Pakistan’s state-owned television, PTV is broadcasting the serial in Urdu dubbing this Ramzan upon the request of PM Imran Khan.

Also, another Dirilis Ertugrul actor Cavit Çetin Güner who played Dogan Alp in the serial in his latest interview said he is also excited to visit Pakistan and meet his fans. He said Pakistan is like his ‘second home’ and he has learned this from his parents. Like Esra Bilgic, he also expressed his wish to visit Pakistan soon. He said he is receiving immense love and appreciation from Pakistan. In the end, he asked his Pakistani fans to continue watching Dirilis Ertugrul.

The TV serial Dirilis Ertugrul was aired on the first of Ramadan after the request of PM Imran Khan. His calls for the broadcast of a Turkish show on a Pakistani television pan out from a tri-nation pact between Malaysia, Pakistan, and Turkey to counter Islamophobia and restore the honor of Muslim Ummah globally.