Erdogan Refuses to Back Down from Syria as US threatens Sanctions

Turkish forces have raged a battle on Kurdish forces that have been US allies in a fight against ISIS. The US mulls over imposing serious sanctions over Turkey and NATO allies are not very happy with the Turkish offensive. 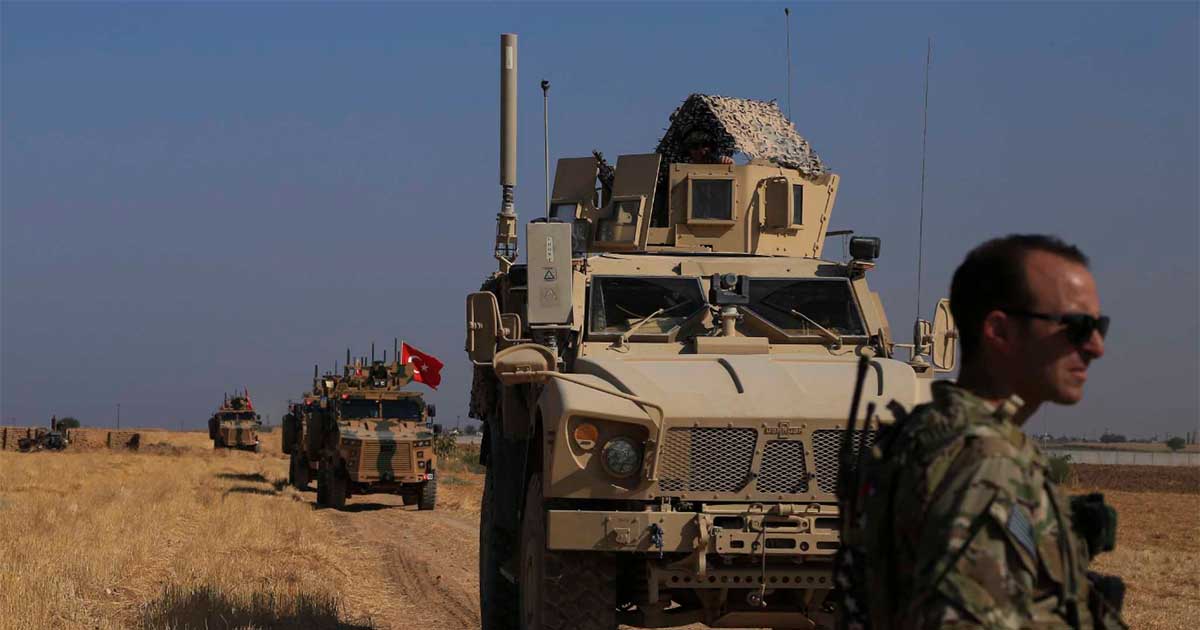 Battles raged in Syria as Turkish President Recep Tayyip Erdogan vowed to press on with a deadly assault against Kurdish forces, while the Pentagon said Friday US troops came under artillery fire from Turkish positions.

Erdogan’s pledge to keep up the offensive, which the UN says has displaced more than 100,000 people since it began on Wednesday, came as the US Treasury warned President Donald Trump was planning to activate “very powerful” sanctions on Ankara.

This is outrageous. @realDonaldTrump needs to explain immediately why he betrayed the Kurds and why his buddy Erdogan is reportedly threatening our forces!

Trump, whose order to pull back US troops from the border this week effectively triggered the intervention, has faced a firestorm of criticism for appearing to give a green light to the push.

The Kurdish administration says some 12,000 men are held in seven detention centers across Kurdish-controlled areas.

Turkey is targeting the Kurdish-led Syrian Democratic Forces (SDF), a key US ally in the five-year battle to crush the Islamic State group. A Pentagon spokesman confirmed an explosion within a few hundred meters of its post close to the northern Syrian border, in an area “known by the Turks to have US forces present”.

“All US troops are accounted for with no injuries,” Navy Captain Brook DeWalt said in a statement. US forces had not withdrawn from their position near the town of Kobani, he said.

“The US demands that Turkey avoid actions that could result in immediate defensive action,” warned DeWalt. Earlier Friday, US Defense Secretary Mark Esper “strongly encouraged” Turkey to halt its offensive as a prelude to such negotiations, warning of “serious consequences”.

But Erdogan vowed the assault “will not stop“. “Now there are threats coming from left and right, telling us to stop this,” he said. “We will not step back.”

Treasury Secretary Steven Mnuchin said Trump had authorized – but not yet activated – new sanctions to dissuade Turkey from further offensive military action. “We can shut down the Turkish economy if we need to,” he said.

Turkey’s third such operation since the start of the war in Syria has been met with international condemnation over what many see as the blatant US betrayal of the Kurdish forces, who have lost 11,000 fighters in the campaign against IS.

As the offensive went into its third day, the SDF was fending for themselves, trying to repulse multiple ground attacks along a roughly 120-kilometer (75-mile) stretch of the border.

The US says it has already plucked two of the most high-profile IS jihadists to have been captured and spirited them out of Syria.

In Al-Hol, a camp holding relatives of IS suspects that lies outside the area targeted by Turkey, women started riots Friday that Kurdish forces swiftly put down. The risk that thousands of the jihadists they still hold could break free on the back of the Turkish assault could yet spur the international community into action.

However Russia and China on Friday blocked a UN Security Council statement drafted by Washington calling on Turkey to halt its offensive, diplomats told AFP.

Read more: US stands aside as Turkey launches Syria operation

The Syrian Observatory for Human Rights said four civilians were killed in Tal Abyad when an airstrike hit the car in which they were fleeing the fighting, while another three were shot dead by snipers around the border town.

Ras al-Ain, Tal Abyad and other border towns between them have been almost emptied in a huge wave of displacement. Most of those fleeing were heading east towards the city of Hasakeh, which has not been targeted by Turkey.

“What does Erdogan want from us?” asked one woman, as she and her family settled into a school being used as an emergency shelter. “Is it all simply because we are Kurds?” Erdogan hopes to create a buffer zone between the border and territory controlled by Syrian Kurdish forces, who have links with Turkey’s own Kurdish rebels.

He also plans to use the strip, which he envisions will be about 30 kilometers deep, as an area in which to send back some of the 3.6 million Syrian refugees who live on Turkish soil.

Aid groups have warned of yet another humanitarian disaster in Syria’s eight-year-old war if the offensive is not stopped. France, a key partner in the US-led anti-IS coalition, has threatened sanctions against NATO member Turkey.

In Al-Hol, a camp holding relatives of IS suspects that lies outside the area targeted by Turkey, women started riots Friday that Kurdish forces swiftly put down.

French leader Emmanuel Macron said the Turkish offensive must stop “as soon as possible” in a phone conversation with Trump on Friday, the presidency said. Turkey is still far from having reached the goals of its military invasion but the risk appears to be growing that detained IS fighters could break free.

Kurdish officials said five IS prisoners managed to escape from a Qamishli facility housing mostly foreign jihadists after shelling struck nearby. A car bomb claimed by IS also went off Friday in Qamishli, one of the main towns in the Kurdish region, killing at least six people, officials and the Observatory said.

The Kurdish administration says some 12,000 men are held in seven detention centers across Kurdish-controlled areas. The US says it has already plucked two of the most high-profile IS jihadists to have been captured and spirited them out of Syria.

Trouble for PML-N: A forward block in the making in Punjab?

Quaid-e-Awam vs Kaptaan: ‘Andhi’ can only come from Lahore!