Turkey launches air and land operation against Kurds in Syria 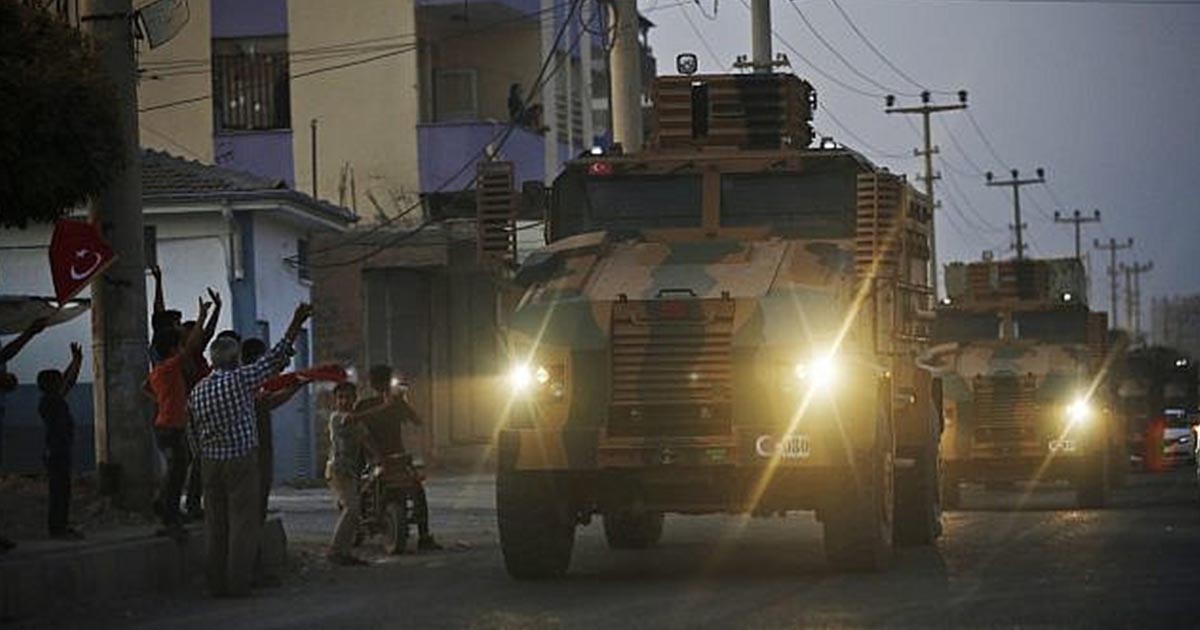 Turkey has launched a broad assault on Kurdish-controlled areas in northeastern Syria, with intensive bombardment followed by a ground offensive made possible by the withdrawal of US troops.

President Recep Tayyip Erdogan announced Wednesday the start of the attack on Twitter and soon after jets and artillery targeted Kurdish positions along the full width of the border, sending thousands of civilians fleeing their homes.

The Turkish Armed Forces, together with the Syrian National Army, just launched #OperationPeaceSpring against PKK/YPG and Daesh terrorists in northern Syria. Our mission is to prevent the creation of a terror corridor across our southern border, and to bring peace to the area.

That was followed late in the evening by the beginning of a ground operation, the Turkish defence ministry said.

#OperationPeaceSpring will neutralize terror threats against Turkey and lead to the establishment of a safe zone, facilitating the return of Syrian refugees to their homes.

We will preserve Syria’s territorial integrity and liberate local communities from terrorists.

US President Donald Trump warned that if the Turkish operation was not conducted “in as humane a way as possible”, he would “wipe out” the country’s economy”.

The assault had seemed inevitable since he announced on Sunday a military pullback from the border, but the attack triggered international condemnation and an emergency meeting of the UN Security Council was set for Thursday.

The Arab League said it was convening an emergency meeting in Cairo on October 12.

The British-based Syrian Observatory for Human Rights (SOHR) said 16 members of the Kurdish-led Syrian Democratic Forces (SDF) militia were killed in the early hours of the Turkish offensive.

Both the SOHR and SDF reported heavy clashes near the city of Tel Abad.

The Kurds have warned that a Turkish offensive would reverse the military gains achieved against IS and allow the jihadist group’s surviving leaders to come out of hiding.

The spokesman for one of the pro-Turkish Syrian militant groups told AFP the land phase of the operation began in Tal Abad, and Turkish media reported special forces and armored vehicles had entered at several points along the border.

The US withdrawal smashed its alliance with the Kurdish forces who spearheaded five years of ground battles against the Islamic State group in Syria.

After Turkey began its attacks against US-allied Kurds in northern Syria, CNN's @clarissaward spoke to frightened civilians fleeing the chaos.

The offensive comes days after President Trump announced that US troops would pull back from the area: https://t.co/5EnGEpbS35 pic.twitter.com/LhULsJIJrY

Defending his decision, Trump said the Kurds did not “help us in Normandy”.

NATO chief Jens Stoltenberg urged Turkey to show “restraint” in its operation against Kurdish forces in Syria, warning that the fight against the Islamic State group should not be put at risk.

The SDF called on the international community to impose a no-fly zone to protect against “an imminent humanitarian crisis”.

Erdogan, who dubbed the attack “Operation Peace Spring”, says the offensive is necessary to curb the power of the SDF due to its ties with Kurdish insurgents inside Turkey.

He also wants a “safe zone” on the Syrian side of the border where Turkey could send back some of the 3.6 million refugees it hosts from the eight-year civil war.

US Secretary of State Mike Pompeo said “the Turks have a legitimate security concern”.

“They have a terrorist threat to their south,” he told PBS.

In the face of the onslaught, Kurdish authorities announced a general mobilization, urging all civilians to “head to the border with Turkey… to resist during this delicate historical moment”.

Kurdish leaders said they would hold their erstwhile US ally and the whole international community responsible for any “humanitarian catastrophe”.

Ras al-Ain was one of the places from which US troops withdrew on Monday.

“We will not leave this land,” said Kaws Seem, a 32-year-old Ras al-Ain resident.

“War has been chasing us for years, and everyday Erdogan threatens us with a new attack,” he added.

The Kurdish-led SDF say they lost 11,000 personnel in years of operations against IS that climaxed in March with a battle against the final bastion of the jihadists’ caliphate in Baghouz.

Trump has faced a barrage of criticism, including from close allies in Washington, for appearing to leave US allies to their fate.

Will lead effort in Congress to make Erdogan pay a heavy price.

There has also been a chorus of international concern, including from France and Britain — the top US partners in the anti-IS coalition — and Russia, now even more firmly the main foreign player in Syria.

Since 2015, Russia has been the main military backer of the Syrian government, which has seized on the policy shift from Trump to try to persuade the Kurds to accept the restoration of central government control.

Regional heavyweight Saudi Arabia also condemned the offensive, arguing it would have “negative repercussions on the security and stability of the region”.

The Kurds have warned that a Turkish offensive would reverse the military gains achieved against IS and allow the jihadist group’s surviving leaders to come out of hiding.

Two jihadists reported to be Britons part of a group dubbed “The Beatles” — accused of abducting and decapitating hostages including American journalist James Foley — were taken into US custody and moved out of the country, a defense official said.

Any War on Iran will cause entire region to Erupt: Hezbollah