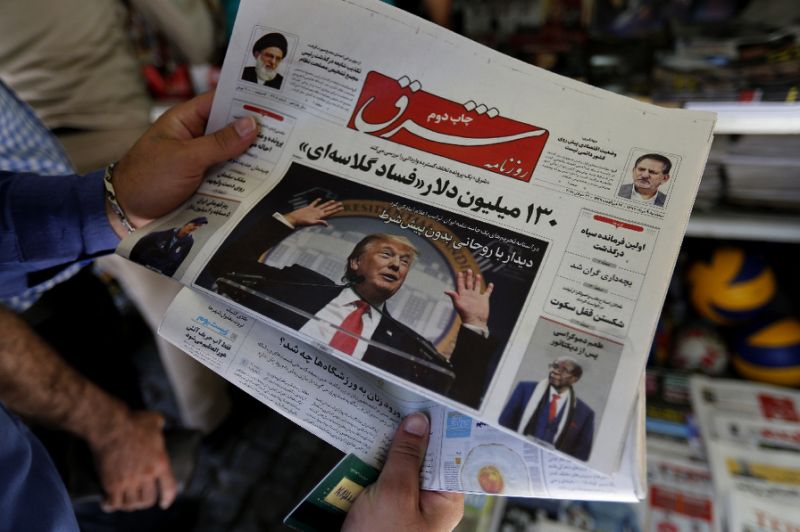 US President Donald Trump’s decision to pull the United States out of the 2015 nuclear accord with Iran and reimpose a raft of sanctions will hit European businesses working in Iran. Here is an overview of how firms stand to be affected when the sanctions kick in Monday:

French automakers Renault and PSA have taken different approaches publicly. PSA, behind the Peugeot, Citroen and Opel brands, said in June it was preparing to suspend activities in the Islamic republic, its chief foreign market by volume, noting those units account for “less than one percent of sales”.

The group, which is Europe’s second biggest carmaker, last year sold more than 445,000 vehicles in Iran, making the country one of its biggest markets outside France. Renault says it intends to keep up activities in Iran albeit scaling them back. On July 16, the automaker announced a 10.3 percent drop in sales in Iran to 61,354 units.

Pharmaceutical giant Sanofi, in Iran for over a decade, remains operating “in full compliance with international regulations”, a spokesman said, while adding “it is still too early to comment on the potential impact” of sanctions.

Germany’s Daimler was teaming up with two Iranian firms to assemble Mercedes-Benz trucks. Volkswagen also said last year it would seek to resume sales in Iran for the first time in 17 years, yet the scale of its US activities could force the jettisoning of those plans.

German firms’ business with Iran was a modest $2.6 billion of 2016 exports rising to 3.0 billion last year. Italy is Iran’s main European trading partner — but Germany is still the bloc’s biggest exporter to Tehran.

Aviation saw beefy contracts drawn up following the nuclear accord as Iran targets modernisation of an ageing fleet. Airbus booked deals for 100 jets although to date only three have been delivered after having US licences bestowed upon them — a necessity given some parts are US-made.

Renault says it intends to keep up activities in Iran albeit scaling them back. On July 16, the automaker announced a 10.3 percent drop in sales in Iran to 61,354 units.

The potential loss of business in Iran would not weigh overly heavily on Airbus as overall orders on its books at the end of June stood at 7,168 planes. Franco-Italian planemaker ATR was fretting on the fate of 20 planes earmarked for Iranian delivery — though Iran Air said Saturday five ATR-72600 aircraft would arrive Sunday, creeping under the deadline to add to eight already delivered.

French energy giant Total has moved away from a contract to develop an offshore gas field at South Pars in what would have been the first project of its kind since the 2015 nuclear deal. Because Total’s investment in the field had barely just begun, the company is avoiding incurring significant losses on a $5 billion project which Iran says Chinese group CNPC will now take up.

After a 30 percent jump in 2016 in exports of Italian-made goods to Iran, Italian exports grew 12.5 percent last year to 1.7 billion euros, according to official data. But energy giant Eni has held back on returning to Iran, preferring to wait on the impact of the latest sanctions.

Britain’s BP, which started life as the Anglo-Persian Oil Company, has no presence in Iran. Although Anglo-Dutch giant Royal Dutch Shell signed a deal in 2016 to explore possible investments it does not currently have any operations on the ground.

Italy stands to lose out in these sectors with national railway operator Ferrovie dello Stato Italiano having signed a deal to build a high-speed line linking Qom to Arak in northern Iran. Shipmaker Fincantieri, engineering firm Maire Tecnimont and gas boiler maker Immergas has also signed a string of deals with Iran which now are also threatened.

British Airways and German carrier Lufthansa face having to stop only recently resumed direct flights to Tehran or face losing Transatlantic business. The dilemma applies to French hotel chain AccorHotels, which opened an establishment in Iran in 2015, as well as to Emirati group Rotana Hotels, which has designs on its own Iranian operation.

Spain’s Melia Hotels International chain, which signed a 2016 deal to run a five star hotel in Iran, the Gran Melia Ghoo, says the establishment is under construction and that discussion of its future is “premature.”

Siemens returned to Iran in 2016 seeking to sell gas turbines and generators for electricity stations and has won a contract to sell compressors for a natural gas processor. “The mega contracts hoped for when sanctions were lifted were never realised,” KPMG advisor Kaveh Taghizadeh was recently quoted as saying in Stern magazine.

German firms’ business with Iran was a modest $2.6 billion of 2016 exports rising to 3.0 billion last year. Italy is Iran’s main European trading partner — but Germany is still the bloc’s biggest exporter to Tehran.

“Siemens will continue to ensure it remains in strict compliance with relevant international export control restrictions and all other applicable laws and regulations, including US secondary sanctions,” Siemens spokesman Yashar Azad told AFP.

He added Siemens “will take appropriate actions to align its business with the changing multilateral framework regarding Iran.” French industrial gas group Air Liquide says it will “cease all commercial activity” in the country although a spokesperson says the firm has “no investments” there.

Read more: Iran volatile on eve of US sanctions

Pharmaceutical giant Sanofi, in Iran for over a decade, remains operating “in full compliance with international regulations”, a spokesman said, while adding “it is still too early to comment on the potential impact” of sanctions.