Is coronavirus outbreak exaggerated to benefit pharma companies? The author argues that big pharma funded, media is manipulating virus outbreak as pharma believes it's "once in a life time opportunity" 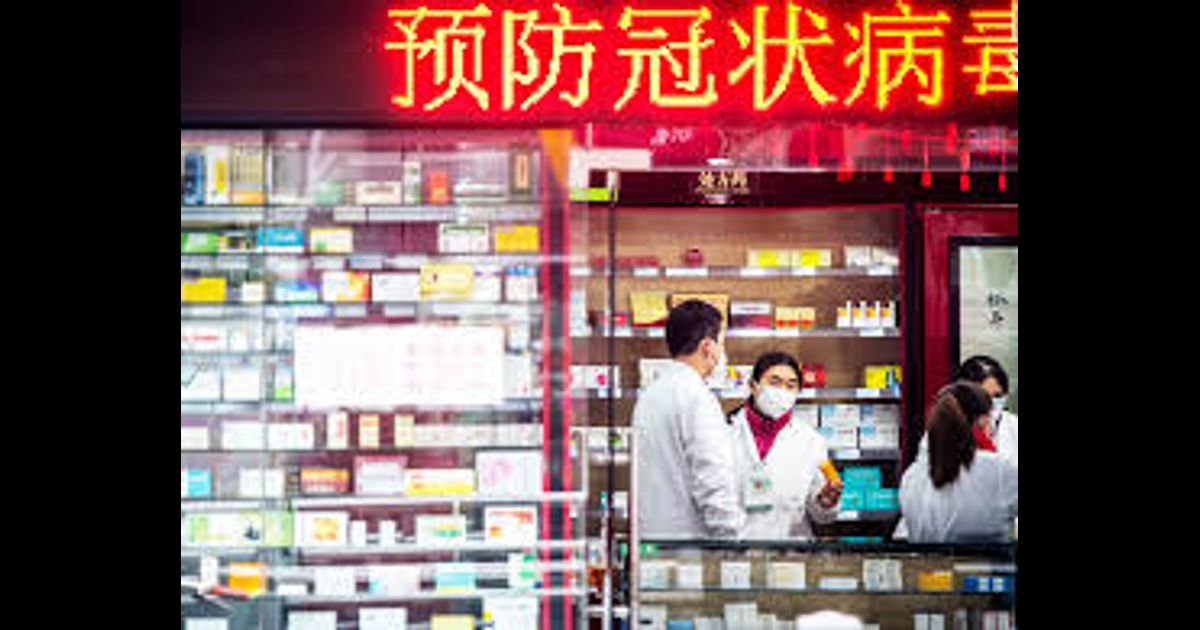 There are firm indications that China has won its battle in suppressing the coronavirus, with daily cases in the country reduced to low double digit numbers. On 8 March 2020, a mere 40 new reports of coronavirus were recorded in China during that day, while on 16 March just 21 fresh cases were detected.

A month before, about two thousand people in China had reportedly contracted the illness each day for a week. The dramatic drop in coronavirus cases must surely rank as a remarkable achievement on Beijing’s part, in a country with 1.4 billion people.

In all, just over 80,000 Chinese citizens have been infected with the illness, with 3,200 dying. That a highly infectious and dangerous malady is being contained in the world’s most populace country, should provide a reality check to those recklessly hyping up this disease in the West.

Big Pharma got language in the coronavirus bill preventing government from limiting their profits on any future vaccines, even though many of the same drug companies are receiving funding from the government to combat the pandemic.

Even in a national emergency, Big Pharma wins.

One would be hoping for too much it seems. If anything, the Western coronavirus frenzy has actually increased in intensity with a “global recession” imminently forecast, in which the public will again bear the brunt of costs.

German leader Angela Merkel last week relayed the outlandish claim that “60% to 70% of the population” in Germany could become infected with the coronavirus in the time ahead. This equates to between 49 million to 58 million Germans. Yet in China, where over 800 million people reside in urban areas, a minuscule fraction of 1% of that country’s entire population have contracted the ailment.

The coronavirus has now spread to more than 160 nations, and counting, on six different continents (3). These apparently stark figures do not reveal anything like the complete picture, however. If by analysing China through their containment of the illness after just over two months, so the affluent countries such as in Europe should suppress it too in the weeks ahead.

There are at present around 200,000 coronavirus infections reported worldwide, with 8,000 deaths occurring as a consequence of the illness. A week ago (11 March), there were 126,000 coronavirus cases globally with just under 5,000 deceased. Now China no longer holds the majority of all infections.

Globally it cannot be called an explosion in cases. With a human population of almost eight billion, this represents a gradual rise rather than an exponential one, regardless of the hyperbole. Numbers of coronavirus “active cases”, that is those currently infected, is around 110,000 as things stand – with over 80,000 people having recovered from the disease, most of them Chinese residents.

One great danger could be that if the coronavirus takes hold in an impoverished continent like Africa, where millions endure underlying illnesses like HIV/AIDS, it may well in that instance inflict a heavy death toll. The population of Africa is 1.3 billion and, as of yet, about a dozen African nations have recorded low infections of the coronavirus. These are mostly occurring in the continent’s richer far north, such as in Algeria and Egypt.

Altogether the number of coronavirus cases remains very low, once more constituting a small percentage of 1% of all humans. The coronavirus does not come close to what can be classed as a “pandemic”, even based on the most up-to-date statistics. A pandemic is a disease “affecting an exceptionally high proportion of the population” worldwide, confirmed by any good dictionary.

To provide some perspective to the coronavirus, there were approximately 10 million tuberculosis (TB) cases worldwide in 2018, with 1.5 million TB deaths noted that year.

The coronavirus has not spread to a large proportion of the population in a single country on earth, let alone in high percentages around the world. This reality seems to have eluded the World Health Organisation (WHO), media conglomerates and politicians.

The mainstream press have significant vested interests in fanning the flames of coronavirus frenzy. In the US, almost every major media outlet has had drug company representatives sitting in their boardrooms. The American writer and lawyer Mike Papantonio noted that, “These gigantic media corporations aren’t going to do anything to threaten their relationship with big advertisers. Drugs are cash cow advertising bonanza for corporate media”.

Officially, around 100 deaths in the US have so far been designated to coronavirus; the true figure is quite likely higher, as a result of potentially misdiagnosed cases; combined with the fact that millions of Americans have no health insurance and avoid seeing doctors, due to high prices.

Elsewhere, the mass media are warning about the possibility of “tens of thousands” of deaths from coronavirus in a small western European nation like Ireland, which has a population of five million. Just two fatalities are presently attributed to the coronavirus in Ireland.

The WHO has had a pivotal role in overplaying the coronavirus, a similar scenario to a decade ago with their hyping up of the swine flu outbreak. WHO swine flu guidelines were drafted by scientists on the payroll of big pharma such as Roche, a multinational healthcare company headquartered in Switzerland.

In 2005, a landmark change took place with the WHO, when its financial policy was altered so as to accept private funding, as an in-depth study reveals. Prior to 2005, the WHO was funded solely by member states, but such strategies have since shifted. By 2015, more than half of the WHO’s annual budget consisted of money provided through private sources, including funds from extremely influential corporate bosses like Bill Gates, one of the world’s richest people. Indeed, Gates has dispensed with over a billion dollars to the WHO.

Over these past 15 years, the WHO has sunk deeper into the pockets of big pharma. During the recent opioid epidemic in America, it was reported that the WHO recommended addictive prescription opioids endorsed by big US pharmaceutical companies, like Purdue Pharma. The WHO’s “guidelines on treating pain were directly influenced by the pharmaceutical industry, including a set of directions for prescribing powerful painkillers that appear to have been taken from the opioid giant, Purdue Pharma”.

Regarding the coronavirus, the WHO’s suspect and erroneous declaration of a pandemic is manna from heaven to big pharma. The experienced investigative journalist, Gerald Posner, remarked that “Pharmaceutical companies view Covid-19 [coronavirus] as a once-in-a-lifetime business opportunity”.

The WHO was aware prior to its exaggeration of the 2009-2010 swine flu, that this ailment was of an overall mild nature, and represented no threat to humanity. It was discovered that five researchers involved in advising the WHO were paid €7 million from the vaccine industry. Many governments bought drugs and vaccines from big pharma on a huge scale, providing billions of dollars in profits for them.

The WHO is a highly influential world body. More than half of our globe’s populace is influenced by advice put forth by it. About 350 million patients have been receiving medical treatment with drugs at least partly based on WHO recommendations. Many of the drugs listed in the WHO directories “are dangerous, often harmful, and without significant beneficial effects for the patient”.

The tentacles of big pharma stretches far and wide. Large sums of corporate money are dangled in front of scientists, professors and academics, with those who accept such offers providing apparent authenticity to policies favoured by pharmaceuticals.

Corporations are institutionalised to create as much wealth as possible, and as quickly as possible. This is incompatible with the production of cheap and effective drugs to patients who need them, so the latter people inevitably suffer, particularly in third world and developing countries.

On closer inspection, it may not be surprising that establishment centres are overestimating the threat of coronavirus. The pharmaceutical industry is comprised of some of the world’s biggest corporations, such as Johnson & Johnson, Pfizer, Merck & Co and Bayer.

The former three companies are headquartered in America, and the fourth one mentioned, Bayer, is a big pharma operation based in Leverkusen, Germany. Chancellor Merkel has warmly praised Bayer in the past; and she was present as a “guest of honour” at the 150th anniversary of Bayer’s founding in 2013 where, in the presence of senior executives, she said that, “The name Bayer has a permanent place in the history of German industry”.

In March 2018 Merkel appointed a former pharmaceutical lobbyist, Jens Spahn, to the position of German health minister. Like virtually all governments in the first world, Merkel’s administration is heavily influenced by the demands of big business, and she has refused to challenge lobbying in Germany.

Merkel’s announcement, that the majority of Germans could become infected with the coronavirus, was based on zero evidence – but her words will have been music to the ears of pharmaceutical companies like Bayer.

In Britain, successive Conservative governments have had a direct part in supporting big pharma over the basic requirements of patients. With drug prices at costly levels, London has been at the spearhead of blocking efforts to tackle the sinister workings of the pharmaceutical industry, enjoying critical help from Merkel’s cabinet.

Most big pharma companies are of course centred in the United States. Each year, American drug companies spend around $6 billion on advertisements, which are aired through the mass media and television networks. Between 1997 and 2016, total US spending on prescription drugs climbed from $116 billion to $321 billion, a major boost to pharmaceuticals.

Shane Quinn has contributed on a regular basis to Global Research for almost two years and has had articles published with American news outlets People’s World and MintPress News, Morning Star in Britain and Venezuela’s Orinoco Tribune. The article was previously published with Global Research and is being posted on GVS with the author’s permission. The views expressed in this article are the author’s own and do not necessarily reflect Global Village Space’s editorial policy.

Previous articleWhy have doctors refused to perform their duties in Sukkur?
Next articleSaudi Arabia steps up to take world role on Corona

18 September 2021
Previous articleWhy have doctors refused to perform their duties in Sukkur?
Next articleSaudi Arabia steps up to take world role on Corona

Covid-19: Pakistan could have tackled it better

This is how you can kill coronavirus in your home, acc. to research

Graduating in a pandemic