Famous Inventors Who Regretted Their Inventions

Scientists have provided many great inventions to the world; however it is interesting to note how many such inventors have also expressed strong regret over their creations. 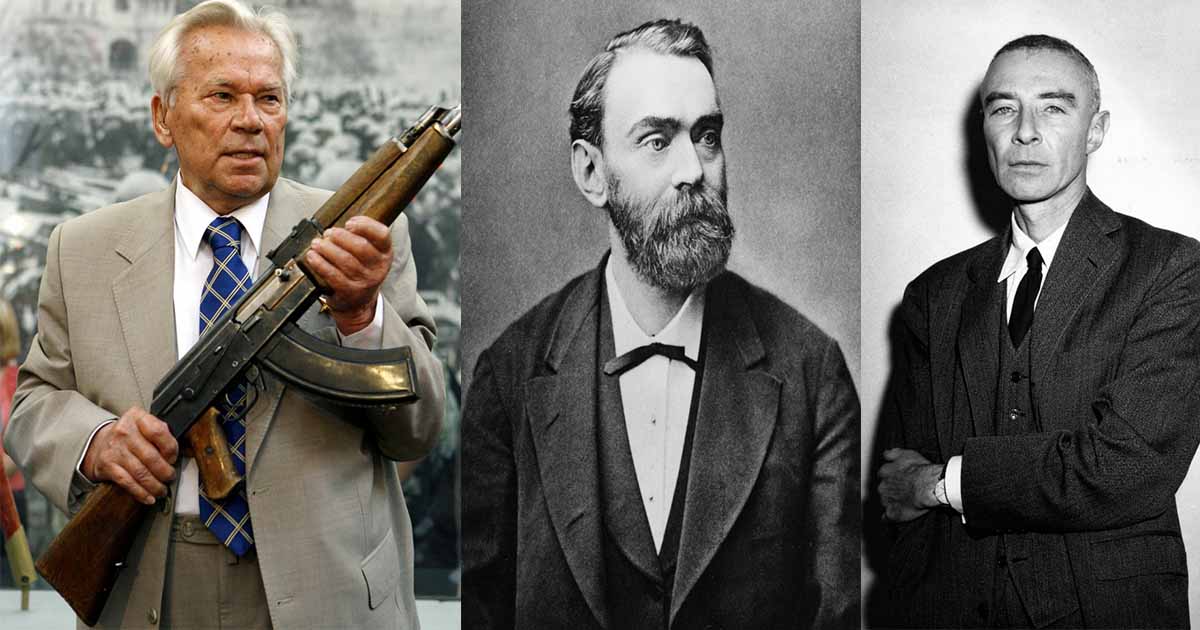 Robert Oppenheimer and Albert Einstein were the directors of the Manhattan Project during World War II and prepared to make nuclear bombs. According to Einstein’s recommendation, President Franklin de Roosevelt convened a board to investigate the possibility of using a nuclear chain reaction as an atomic bomb. Oppenheimer directed the Manhattan Project, which produced the first nuclear bomb in the desert outside of Algorithm, New Mexico.

The atomic experience was successful due to Robert Oppenheimer direction and Albert Einstein’s brainchild; however, both scientists have expressed great regret over the invention of their beloved creation, as Oppenheimer expressed his grief though a phrase taken from Bhagavad Gita, “Now I become Death, to destroy the world.”

You must live under a rock to not about the infamous AK-47 or Kalashnikov. During the Second World War, Soviet engineer Mikhail Kalashnikov developed a rifle he never thought would be the first choice weapon for many gang owners, terrorists and the dictators.

He regretted and spoke about his invention several times in his long life. One year before his death, in 2013, at age of 94, the inventor wrote a tortured letter to the head of church, as reported by Izvestia, in a newspaper Kalashnikov confessed that his “spiritual pain is unbearable”.

Alfred Nobel, who started the Nobel Peace Prize, ironically invented one of the very first Dynamite in the early 1860s. However, when he witnessed people misuse his creation with the intention to foolishly kill, he regretted his greatest invention. Moreover, on the death of his brother, the newspaper titled the story as ‘the trader of death dies’.

This worried Alfred Nobel, contemplating if this was the legacy he has chosen to leave behind. This led to his next great invention, the Nobel Peace Prize. Alfred died in Italy on December 10, 1896. In his last wish, he wrote that his fortune should be allocated towards rewarding those who have done the best for humanity in physics, chemistry, physiology or medicine, literature, and peace.

Wilber and Orville Wright were American aviation pioneers. In 1903 the Wright brothers made the first powered, sustained and controlled aircraft, passing two miles during its first fully operational flight. Wilbur and Orville Wright served their lives towards manufacturing aircrafts and finally completed the dream of flying for man.

Selling the aircraft to the US military, Orville Wright expressed sadness over the destruction of his invention in the First World War.

Raana Kanwal is a graduate from Punjab University who has worked at Daily Jang, Aaj News and is currently serving as an administrator to the Federal Board of Revenue, Islamabad. The views expressed in this article are author’s own and do not necessarily reflect the editorial policy of Global Village Space.

Why does Trump want to keep deaths due to drones secret?