Fans are delighted as Gigi Hadid lambastes an Islamophobe on Twitter 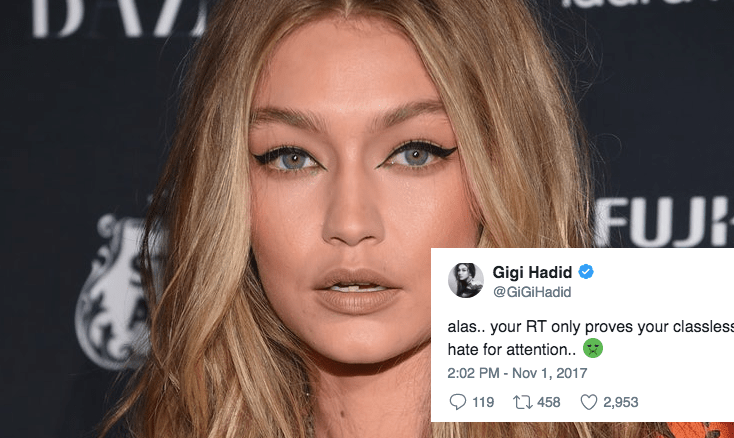 American supermodel Gigi Hadid on Wednesday lambasted an Islamophobic tweet made by an investigative journalist Laura Loomer. The journalist made racist remarks on Muslims in the aftermath of the recent horrible terror attack in New York.

Read more: Life as a child in Osama bin Ladin’s compound in Abbottabad

Loomer shamed two Muslims girls in Hijab pictured at the scene of New York terror attack. She took a photograph of the girls in headscarves and said that they were smirking.

Muslims are out in full force at the scene of the NYC #ISIS attack today rubbing it in everyone’s face. Aimlessly walking around in hijabs. pic.twitter.com/UV0DOikmJy

You’d think they’d have the decency to not walk around in hijabs @ cross street of the attack. But they don’t. I bet they’re loving this.

In her tweet, she accused the girls of ‘rubbing’ the New York City terror attack in everyone’s face by walking around in Hijab aimlessly.

Her tweet was largely criticized on social media. Gigi Hadid was displeased by the offensive remarks by the journalist. The supermodel then rallied in to defend the girls and in particular “Hijab”. She lashed out at the far right activist for making a hate tweet to seek attention.

Laura, I hate to give you the attention, but I need to tell you- You’re a f**king moron. https://t.co/fCezijj2Ao

Loomer later realized her offense but defended by saying that she is not the one who killed eight people.

Every verified liberal in Hollywood & MSM is tweeting at me today. I guess I really pissed them off! ‍♀️. It’s not like I killed 8 ppl… https://t.co/j89HBm0kBh

alas.. your RT only proves your classless desperation to spread hate for attention..

Hadid with her unrestrained response appeased all her admirers. Later fans and followers of both the ladies joined the heated online debate. Majority of the people supported Hadid and expressed their love for her.

i freaking love you

Hadid is half-Palestinian who has become increasingly outspoken in her support for Muslims. She was recently featured on the covers of Vogue Arabia in Hijab.