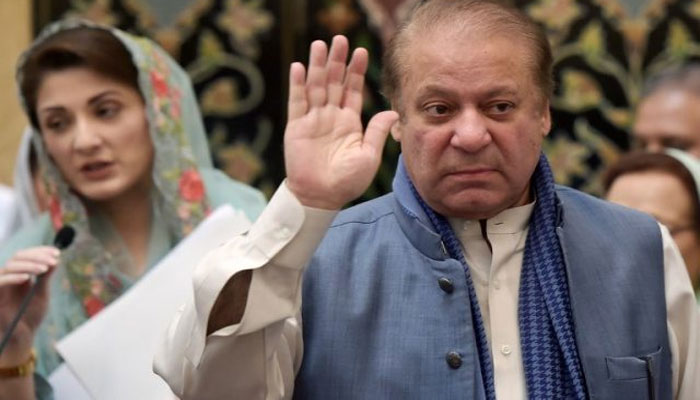 An accountability court is due to announce its verdict in National Accountability Bureau’s (NAB) Flagship Investments and Al-Azizia Steel Mills references against former Prime Minister Nawaz Sharif today (Monday, Dec 24). Accountability Court II Judge Arshad Malik had reserved the verdicts against the Sharif family on Wednesday, Dec19. The judge on Dec 21 rejected an application by Sharif’s lawyer Khawaja Haris to defer the judgment.

One of the three references, Avenfield, involved Nawaz, daughter Maryam and son-in-law Muhammad Safdar, while the other two references, Flagship and Al-Azizia, concerned Nawaz and his sons Hasan and Husain Nawaz.

The Supreme Court had directed the accountability court to conclude the cases by December 24, after previously granting it seven extensions to wrap up the references initiated by NAB.

A large number of PML-N supporters have gathered outside the court premises to show their support for the party’s leader. Only leaders who have the permission of the registrar will be allowed to attend the proceedings; therefore, Ahsan Iqbal, Marriyam Aurangzeb, and Javed Hashmi were permitted to enter the premises, rest of the leaders are standing outside the court.

Read more: Will Nawaz Sharif be arrested again: Court to announce on 24th…

Only 15 people will be allowed in the courtroom including PML-N leaders and lawyers, as per instruction. Security has been beefed up around the judicial complex. Heavy contingents of police and Rangers –said to be in thousands– have been deployed around the building and along roads leading to the court. Although Section 144 has been imposed in the capital to maintain law and order situation.

Earlier on Sunday, Nawaz Sharif arrived in Islamabad from Lahore and had met PMLN president Shahbaz Sharif at his Ministers’ Enclave residence to discuss the party matters and post-verdict scenario.

The SC had formed a joint investigation team (JIT) to probe the former PM after Nawaz Sharif was named in Panama Papers in 2016. On the basis of the JIT report, Nawaz was disqualified from being a member of parliament in July 2017. The top court had also directed the National Accountability Bureau (NAB) to file references against the Sharif family and to decide the case within six months.

One of the three references, Avenfield, involved Nawaz, daughter Maryam and son-in-law Muhammad Safdar, while the other two references, Flagship and Al-Azizia, concerned Nawaz and his sons Hasan and Husain Nawaz. The two brothers residing in London have been declared absconders and offenders by the court since the proceedings began last year.

The court had announced its verdict in the Avenfield reference on July 6. Nawaz, Maryam, and Safdar were sentenced to ten, seven, and one year of imprisonment, respectively. They, however, were released on bail by the Islamabad High Court (IHC) after a few months.

Nawaz Sharif filed a petition in the IHC for transfer of cases to another court, pleading “since the evidence and the arguments in all three references were similar, the outcome may be the same if the same judge heard the case”. Subsequently, Judge Bashir recused himself from hearing the cases and the cases were transferred to the court of AC Judge Muhammad Arshad.

Read more: From worse to worst: Another scam of Nawaz Sharif revealed

NAB’s special prosecutor says the case against the Sharifs revolves around finding out how the family’s companies were established and through which resources. Sharif family had said money was taken out of the AED 12 million that Late Mian Sharif had invested with Qatari Royal family. The prosecutor said, however, Qatari Prince Sheikh Hamad bin Jassim bin Jaber Al-Thani never appeared before the JIT to verify the details

Sharif’s advocate Haris explained that Mian Sharif had established Gulf steel Mills in UAE in 1974; its shares were sold by 1980 and the amount of AED 12 million gained out of selling shares was invested with Qatari family. The prosecutor claimed that those were private transactions according to Sharif family itself, as the amount was never transferred through official channels; the reason JIT did not believe in Sharif family’s explanations.

NAB prosecutor further said that Sharifs had to justify the investment of AED 5.4 million by Mr. Hussain in Al-Azizia/Hill Metal Establishment and AED4.2 million by Mr. Hassan in flagship Investment and other companies but family failed to explain the investment. The prosecutor claimed that Mr. Sharif was the real owner of the companies established by his sons who were just benamidar.

The government is seeking revenge against PPP: Nafisa Shah

Nawaz Vs. Shehbaz: Will Brother Agree Upon JUI-F’s Anti-Govt March?