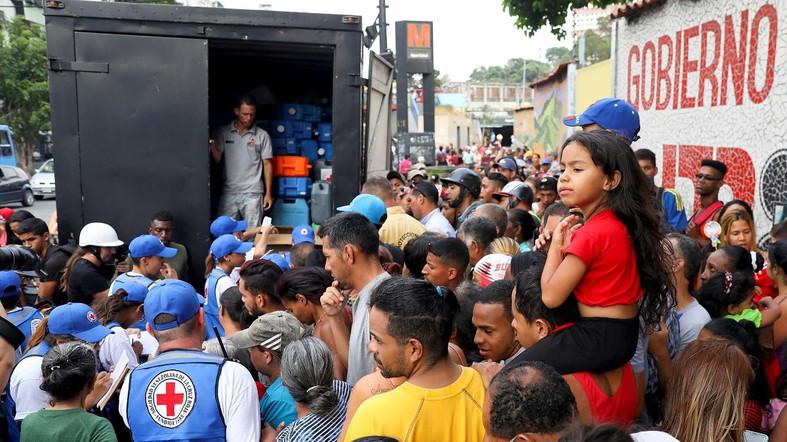 The first shipment of Red Cross humanitarian aid arrived in crisis-wracked Venezuela on Tuesday following approval from President Nicolas Maduro’s government, the organization confirmed. “This is a great step forward to support vulnerable people in the country!” tweeted Francesco Rocca, president of the International Federation of the Red Cross and Red Crescent Societies.

The shipment included 24 tons of medical supplies and 14 power units to be distributed amongst eight hospitals and 30 outpatient clinics — half of them public — said Health Minister Carlos Alvarado. Some 30 trucks moved the supplies from the Maiquetia airport to a Venezuelan Red Cross collection center in Caracas, AFP journalists said.

The ICRC announced it would begin in early April a first phase of aid distribution to help 650,000 people.

Some 3,100 volunteers will take part in the distribution of the supplies that arrived from Panama. Venezuela has suffered more than four years of recession marked by shortages of basic necessities such as food and medicine. The United Nations says a quarter of its 30 million population is in urgent need of aid.

Last week, Maduro and the International Committee of the Red Cross (ICRC) came to an agreement to allow in the humanitarian aid. Supplies destined for Venezuela’s long-suffering population formed the basis of a stand-off between Maduro and the speaker of the National Assembly, Juan Guaido, who launched a direct challenge to the president’s authority in January.

Guaido has since been recognized by more than 50 countries, including the United States, as Venezuela’s interim president. But despite a highly publicized campaign, he failed to force humanitarian aid stockpiled over the border in Colombia into the country after the military — which remains loyal to Maduro — blockaded a bridge crossing.

Maduro claimed the aid was nothing more than a smokescreen to cover a US-led invasion. Guaido said the entry of aid was “recognition of the failure of the regime that until a few weeks ago was denying the existence of a humanitarian emergency.”

Venezuela has suffered more than four years of recession marked by shortages of basic necessities such as food and medicine.

He said this shipment was merely “a sedative to contain the emergency.” Francisco Valencia, president of the Coalition of Organizations for the Right to Health and Life, voiced concerns over whether or not the aid would help the “more than 300,000 people in Venezuela with a high risk condition.”

Public hospitals have struggled to treat patients due to shortages of antibiotics, bandages and respiratory equipment. The government has been unable to import what the country needs due to a lack of liquidity, in part due to a sharp drop in its oil production — around a third of its level from 10 years ago — which accounts for 96 percent of its revenue, as well as US sanctions.

New US sanctions against state oil company PDVSA are due to kick in on April 28 while Venezuelan imports, worth $66 billion in 2012, are expected to reach just $7.8 billion this year, according to Ecoanalitica. Maduro has repeatedly denied that Venezuela is suffering from a humanitarian crisis and blames the United States for the oil-rich South American country’s economic woes.

But last week he said on national TV and radio that his government and the Red Cross had agreed “to work together with UN agencies to bring into Venezuela all the humanitarian aid that can be brought.” Guaido blames government incompetence and corruption for his country’s crisis.

In a tweet, Foreign Minister Jorge Arreaza praised Maduro in the face of “Washington’s cruel blockade” for taking actions to “protect all the people.” Last month, the ICRC announced it would begin in early April a first phase of aid distribution to help 650,000 people.

Maduro and the International Committee of the Red Cross (ICRC) came to an agreement to allow in the humanitarian aid.

Rocca had said the operation would be “similar” to a previous one that delivered aid to Syria. Mario Villarroel, president of Red Cross Venezuela, urged both sides to avoid “politicizing this great achievement.”

Guaido ally Hasler Iglesias told AFP that “everything will be distributed by the Red Cross. Neither us nor them (the government) are involved.” In a tweet, US Senator Marco Rubio, an outspoken critic of the Maduro regime, praised Guaido and the National Assembly for the entry of aid.

The challenges facing Bolsonaro as he takes power in Brazil