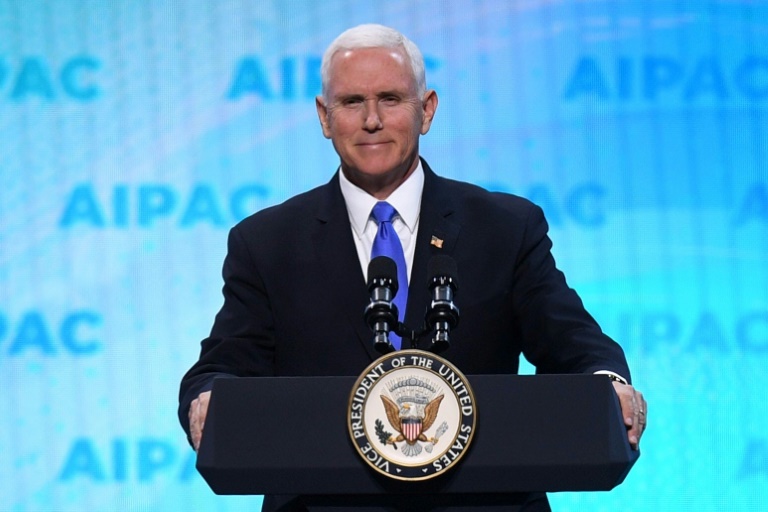 The United States on Friday announced sanctions on ships of Venezuela’s state oil company and companies that link it to key ally Cuba, hoping to cut off vital lifelines for President Nicolas Maduro.

Vice President Mike Pence unveiled the latest measures in Washington’s bid to oust Maduro, a leftist firebrand who has nonetheless held on to power for more than two months, and vowed further pressure on Cuba — a bugbear of the United States for a half-century.

A Trump administration official, speaking on condition of anonymity, said the United States estimated that Venezuela delivered 50,000 barrels a day to Cuba.

“Venezuela’s oil belongs to the Venezuelan people,” Pence said in a speech at Rice University in Houston. “Those looking on should know this: All options are on the table. And Nicolas Maduro would do well not to test the resolve of the United States of America,” he said.

“The United States will continue to exert all diplomatic and economic pressure to bring about a peaceful transition to democracy,” he said. The Treasury Department said it was designating 34 vessels of state oil company PDVSA as blocked property, meaning that the United States will prohibit all transactions with them.

It also targeted a tanker that ships crude oil from Venezuela to Cuba, the Despina Andrianna, as well as two shipping companies that own or register the vessel. One is based in Liberia and the other in Greece, one of the sole Western nations that backs Maduro.

Pence also hinted that President Donald Trump’s administration will take further action against Cuba as it considers allowing exiles to sue over property seized by the communist authorities. “In the coming weeks, the United States will be taking even stronger action against Cuba. In this administration, I promise you, it will always be Que Viva Cuba Libre,” he said, using the Spanish for “Long Live Free Cuba.”

The United States on Friday announced sanctions on ships of Venezuela’s state oil company and companies that link it to key ally Cuba.

The push on Cuba is a sharp change from the previous administration of Barack Obama, who said that the longtime US effort to isolate the island had failed and re-established diplomatic relations.

A Trump administration official, speaking on condition of anonymity, said the United States estimated that Venezuela delivered 50,000 barrels a day to Cuba — a critical amount for the island, which in turn provides security, intelligence and other services for Maduro.

Read more: Rich and poor united in desperate quest for water in Venezuela

“By severely impacting the shipment of that oil and the ability to get that oil from Venezuela to Cuba, there is going to be a recalibration of that relationship. This is the first step in the pressure,” the official said.

But Maduro also still enjoys support from China, which has lent $60 billion over the past decade to Venezuela, and Russia, which has sent military experts to Caracas and says the United States is attempting a coup.

The United States itself was a key market for Venezuelan oil through Citgo, a subsidiary of PDVSA, but Washington has forced the operator to place earnings in a blocked account.

How far can Venezuela go in raising price of world’s cheapest gas?