‘Flight of the revolution’: the Ayatollah’s return to Iran 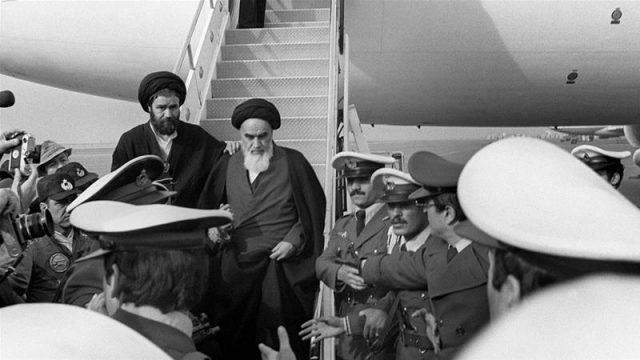 In the dead of night on February 1, 1979, Iran’s revolutionary leader Ayatollah Ruhollah Khomeini took off for Tehran from Paris onboard a specially chartered Air France jet. The elderly opposition leader betrayed no emotion during what became known as the “flight of the revolution”, despite the enormity of his triumphant return to establish an Islamic republic.

Also onboard were close aides and about 150 journalists, their presence meant to ensure that the plane would not be shot down by troops still loyal to the shah. AFP correspondent Pierre Lambert was among those on the tense and tightly secured flight. Here are extracts from his story, translated from the original French.

From Paris to Tehran with the Ayatollah

TEHRAN, February 1, 1979 (AFP) – After more than 14 years in exile and an uneventful five-and-a-half hour-flight aboard a special Air France Boeing, Ayatollah Ruhollah Khomeini finally returned to his homeland on an historic Thursday for the Iranian people.

Silent at his window, Khomeini contemplated the country below that he had long yearned for and which had been so far from him only a few hours ago.

It was 9:40 am local time and a pale winter sun was out when the clearly moved Shiite leader stepped onto the land of his forefathers at Tehran’s Merhabad airport. The 349-seat Boeing 747 had only taken on 200 passengers, leaving many hopefuls behind, to be able to carry as much fuel as possible in case “things went badly” and it were prevented from landing and needed to return, an airport official said before take-off.

The crew for the one-of-a-kind mission were all volunteers, a hostess said, although there was no risk bonus on offer. The first to board was the ayatollah — with a self-assured step despite his 76 years, his slim silhouette draped in a black robe and his face an impenetrable mask — who took seat A1 in first class.

Surrounded by around 40 mullahs and followers, the elderly opposition leader with the beard of a prophet, remained taciturn and deep in thought for the first hour of the journey, even though a nation was waiting with bated breath. Then, alone with his son, he went to the upper level, sat down in one of the armchairs from the bar, and quickly fell asleep.

As the plane flew over the Bosphorus, an aide Sadegh Ghotbzadeh — himself returning after 20 years in exile and touted as a future minister of the “revolutionary government” — held an impromptu news conference in the middle of the aircraft.

Also onboard were close aides and about 150 journalists, their presence meant to ensure that the plane would not be shot down by troops still loyal to the shah.

“Before leaving,” he said, “the ayatollah gathered us, his followers, together and told us ‘this journey involves risks that I do not underestimate: I can be assassinated. I can be taken prisoner. I can be put under house arrest. I accept these possibilities with a light heart but I perfectly understand those who refuse them and who would choose not to leave. Everyone must be responsible for themselves’.”

Ghotbzadeh added to the journalists, surprised that there were no women or children among the returnees, “This plane is a lot less safe than you seem to think. They can shoot at us.” That sent a shiver down the spine of many.

Read more: 1979: A pivotal year in the Arab-Muslim world

Ghotbzadeh then announced that “a revolutionary government would be proclaimed within two or three days” and reiterated that the Shiite leader would refuse all dialogue with Prime Minister Shapour Bakhtiar “as long as he has not resigned.”

He said weapons were being distributed to people across the country. “The order to use them has not yet been given but the time is coming.” He added: “Of course, our weapons are less powerful than those of the soldiers who dream of annihilating us but we, we have faith, we will overcome.”

The crew for the one-of-a-kind mission were all volunteers, a hostess said, although there was no risk bonus on offer.

On a possible attack against the returning “supreme leader”, he said: “If they touch a single hair on his head, things will turn bloody.”

The ayatollah emerged from his slumber. About two hours before arriving at Mehrabad, he asked a hostess for a glass of water and the direction of Mecca. Moments later, the old man sank into his prayers.

With half an hour of the flight left, the plane emerged from the night and approached the Iranian daylight over snow-capped mountains. Silent at his window, Khomeini contemplated the country below that he had long yearned for and which had been so far from him only a few hours ago.

And for the first time since boarding, a smile lit up his usually austere and serious face, pictured profusely in newspapers around the world over the past months.

Disappeared for a day: Ayaz Khan declines report of kidnapping