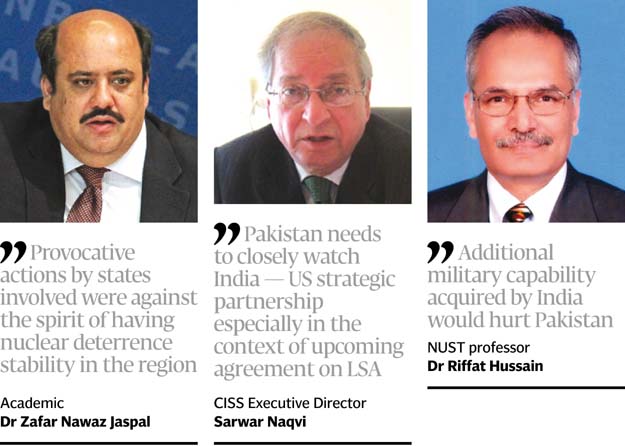 Pakistan stands on the verge of fundamental foreign policy choices. The changing international environment requires a change in the Pakistani approach. The choices center on how thoroughgoing an alignment with the United States it should pursue, particularly, when Washington is scraping the military aid and pressurizing Islamabad to do more. The Pakistani ruling elite has to realize its worsening ties with the United States and also understand the limitations of its closest ally China in the Asian strategic environment and inherent deficiencies in its nascent strategic partnership with Russia.

The Pakistani rulers and masses ought to be realistic in their expectations from the great powers and regional allies in the prevalent global politics. Its an established dictum of the international society, no one sacrifice one’s national interests for a partner or an ally. Secondly, strategic and economic interests always surpass moralistic norms. Hence, neither Americans nor their Western allies give importance to the Pakistani law enforcement agencies and people sacrifices in the lingering war on terror. They simply ignore the heroic sacrifices of the Pakistani nation for the sake of their geopolitical and economic interests.

China has been investing nearly $62 billion in Pakistan. The CPEC links Western underdeveloped regions of China with the South Asian and West Asian markets.

Now, the United States and Pakistan’s geopolitical interests contradict each other, while Moscow and Islamabad geopolitical interests don’t contradict each other; in fact, they tend to coincide, especially in the Afghanistan affairs. Trump administration’s bullish approach towards Pakistan is drifting Pakistan away from the United States. The increasing mistrust between Islamabad and Washington is neither in the interest of the former nor helpful for the Americans Eurasian strategy.

But it is profitable for both Russia and China. The tensions with Washington were further aggravated when the US Military Lieutenant Colonel Kone Faulkner announced: “Due to a lack of Pakistani decisive actions in support of the South Asia Strategy… $300m (actually $323.6m to include non-Pakistan funds) was reprogrammed by the Defense Department in the June/July 2018 time frame for other urgent priorities.”

Read more: U.S-Pak Relations: the United States has a clear engagement policy but…

The cutting off the aid announcement just a few days before Secretary of State Mike Pompeo and the US Chairman of the Joint Chiefs of Staff Committee General Joseph F. Dunford scheduled meetings in Islamabad spoiled the situation and also dashed the hopes about the improvement in relations between Pakistan and the United States.

Pakistan and China have common interests that ought to lead to the common endeavor. Both sides are convinced that China-Pakistan Economic Corridor, the flagship project of China’s Belt and Road initiative, is an important vista of economic progress and prosperity. China has been investing nearly $62 billion in Pakistan. The CPEC links Western underdeveloped regions of China with the South Asian and West Asian markets.

The relations between Moscow and Islamabad are on a positive trajectory. Russia is ready to sell military hardware to Pakistan despite the strong opposition of India.

Pakistan’s Gwadar port not only connects but also shortens the distances among the Middle Eastern, European and Chinese markets. Prime Minister Imran Khan’s overriding priority is to synchronize its domestic and foreign policy agendas, which inevitably means featuring economics. Premier Khan expressed his desire to establish good ties with all the neighboring states, including archrival India.

He said in his victory speech, addressing India: “If you take one step forward, we will take two steps forward,” The government is expected to request the International Monetary Fund for a bailout package. It needs $9 billion for managing its economic crisis. Perhaps, without improving relations with the neighboring states, resolution of economic problems of the country is too cumbersome.

Today, Beijing and New Delhi economics interests don’t challenge each other. In practice, their economic interests overlap. The bilateral trade volume between China and India is more than $100 billion in a year. The Chinese seem confident that the Indians will not jeopardize their economic gains for the sake of the Americans strategic agenda in Asia. Therefore, they have been underplaying the cementing Indo-US strategic partnership.

Indeed, the improvement of ties between India and Pakistan is in the interest of China. That’s why; it has been encouraging Pakistan to stabilize its border with India. Without stability in South Asia, Beijing cannot pursue its regional economic ambitions. The relations between Moscow and Islamabad are on a positive trajectory. Russia is ready to sell military hardware to Pakistan despite the strong opposition of India.

Read more: After US, the Chinese foreign minister visits Pakistan

The important area of convergence is the erasing of radicalized militants sanctuaries located in Afghanistan. Unlike the Americans, the Russians are convinced that Pakistan sincerely endeavors for the political stability in Afghanistan. To conclude, the increasing convergence in Indo-US geopolitical agendas and economic interests enhances suspicion between Islamabad and Washington. Therefore, Islamabad has been struggling to foster new strategic partnerships and alliances.

Trump’s gamble on Iran will prove advantageous for China