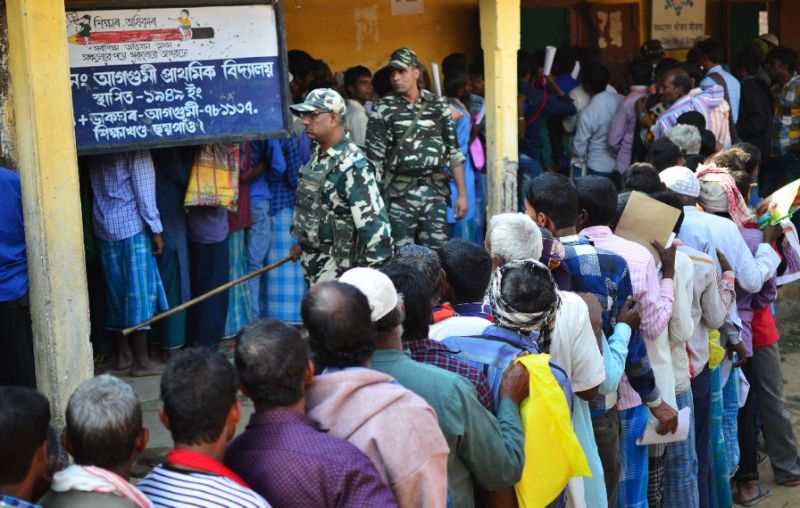 India on Monday effectively stripped four million people in Assam of citizenship, sparking fears of mass deportations of Muslims from the northeastern state. A new draft register of citizens includes only those able to prove they were in Assam before 1971, when millions fled Bangladesh’s war of independence into the state, and their descendants. Critics say it is the latest move by the right-wing government of Prime Minister Narendra Modi to bolster India’s Hindu majority at the expense of minorities. India will hold a national election next year.

The Assam government has brought in 25,000 extra security force members from outside the state in case of trouble. News of the draft register sparked opposition protests in the national parliament, forcing the adjournment of upper-chamber hearings for the day. Just over four million of the more than 30 million people who applied to be on the list were excluded from the draft, said Shailesh, the registrar general of India, who uses one name.

Assam, where one third of the population is Muslim, is the only Indian state to compile a register of citizens.

“No genuine Indian citizens need to worry as there will be ample opportunities given to them to enlist their names in the final list,” he told a news conference in Assam’s biggest city Guwahati. He said appeals could be made under “well-laid-down procedures” starting August 30. The definitive list is to be finalized in December. “We are going to provide assistance to anyone whose names are not included in the document and whoever wishes to file a claim and objection in this regard,” Shailesh added.

Modi’s Bharatiya Janata Party (BJP) won control of Assam in 2016 after promising to expel illegal immigrants from mainly Muslim Bangladesh and protect the rights of indigenous groups. Assam, where one third of the population is Muslim, is the only Indian state to compile a register of citizens.

Hundreds of thousands fled to India from Bangladesh during its 1971 war of independence from Pakistan. Most settled in Assam, which shares a long border with Bangladesh. Migrants have since been accused of illegally entering the state and taking land and jobs, causing tensions with locals. Rights groups have criticized the government move, saying deletion from citizenship lists was similar to Myanmar’s removal of rights and protections for its Rohingya community in 1982.

Avaaz, a US-based activist group slammed the Indian action. “It’s just Muslims who will likely have to go through a complicated, unfair appeal with no right to counsel, ending in no hope of staying if they lose,” Ricken Patel, the executive director of Avaaz, said in a statement. Assam, a state of 33 million people known for its lush tea estates, has for decades been racked by violence between indigenous tribes and settlers.

About 2,000 suspected migrants were butchered in a single day in Nellie in 1983. Nearly all were Muslim, and many were children. The country’s Supreme Court which has been supervising the registration, had initially set June 30 as the deadline to publish the draft list.  But this was postponed to July 30 because the massive exercise could not be completed in time.

A first draft published last December included only 19 million people as legal citizens. “I am feeling good after seeing the name of mine and other four members of my family in the draft list,” Abdul Gani, a journalist based in Guwahati, told AFP. “We were a little worried as the first draft did not include our names. However, we had belief in the system.” In New Delhi, Home Minister Rajnath Singh also sought to allay fears about Assam.

“No coercive action will be taken against anyone. Hence there is no need to panic,” Singh said in parliament. Satyendra Garg, a home ministry official who was at the Guwahati press conference, said there “was no question of sending anyone to detention camps based on the draft list”.

The Assam controversy comes as the government looks at amending the citizenship law to allow certain “persecuted minorities”, including Hindus and Christians from neighbouring countries, to obtain legal status after six years of residency in India. Other groups must wait 11 years to become naturalized citizens.