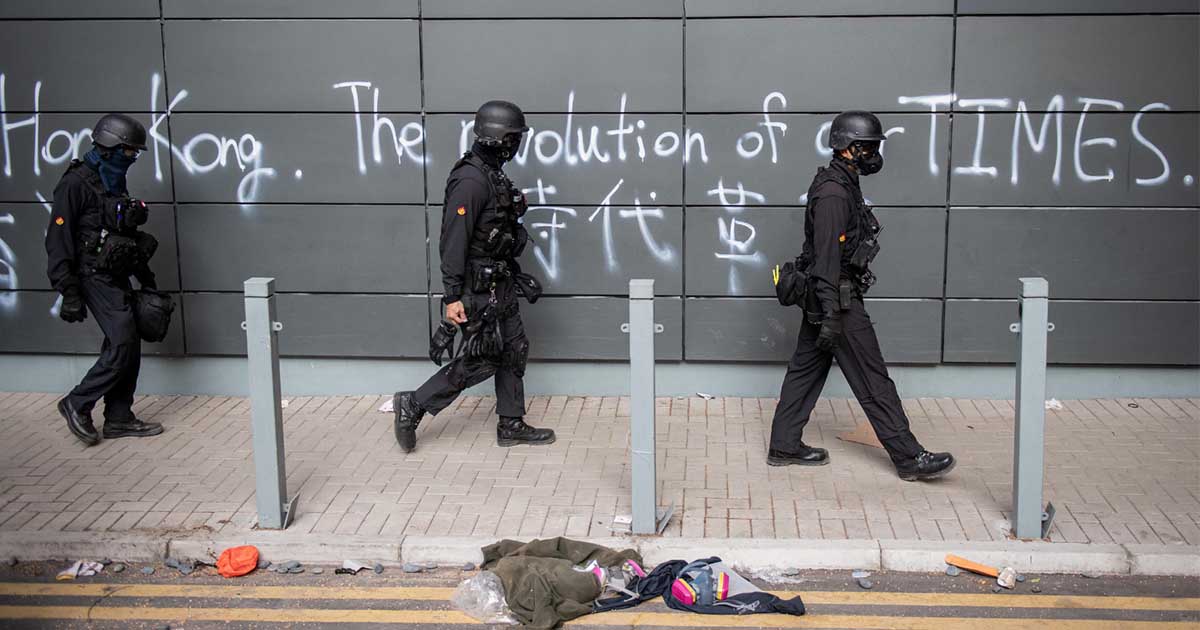 Trump had seemed reluctant to sign the legislation, but came under heavy pressure from Congress, where the issue has attracted rare bipartisan support.

In a statement, Trump spoke of “respect” for Chinese President Xi Jinping and said he hoped the “leaders and representatives of China and Hong Kong will be able to amicably settle their differences”.

But Beijing reacted furiously, warning it was ready to take unspecified “firm countermeasures”. “The nature of this is extremely abominable, and harbours absolutely sinister intentions,” the foreign ministry said in a statement.

In Hong Kong, the government expressed “extreme regret” after Trump signed legislation requiring an annual review of freedoms in Hong Kong and banning the sale of crowd control equipment like tear gas.

Read more: Hong Kong Cleans Up After 5 Months of Protests

“The two acts are obviously interfering in Hong Kong’s internal affairs,” the government said in a statement, warning the move would “send the wrong message to the protesters”.

Hong Kongers have protested in huge numbers over the last six months, fuelled by years of growing fears that authoritarian China is stamping out the city’s liberties. The territory’s Beijing-backed leaders have offered few concessions and police have cracked down hard on protesters in increasingly violent confrontations.

The violence has done little to dampen support though, with pro-democracy candidates winning a landslide victory in local council elections over the weekend. The Hong Kong Human Rights and Democracy Act requires the US president to annually review the city’s favourable trade status and threatens to revoke it if the semi-autonomous territory’s freedoms are quashed.

Trump had seemed reluctant to sign the legislation, but came under heavy pressure from Congress, where the issue has attracted rare bipartisan support

“The US now has new and meaningful tools to deter further influence and interference from Beijing into Hong Kong’s internal affairs,” Rubio said.

“Following last weekend’s historic elections in Hong Kong that included record turnout, this new law could not be more timely in showing strong US support for Hong Kongers’ long-cherished freedoms.”

Read more: What are Chinese troops doing in Hong Kong?

Hong Kong activists welcomed the move saying it would help build international consensus in support of their movement.

Sunny Cheung, a student who testified before Congress in support of the legislation, told AFP it would give “Hong Kong people timely leverage to press Hong Kong and Beijing further on democratic reform”.

Trump could have vetoed the bill, but he would have faced the possibility of a politically humiliating override — something unthinkable on most issues, but feasible given the strength of congressional support on Hong Kong.

Trump badly wants even a partial trade deal with Beijing to show to voters as his reelection campaign gets underway, and had appeared to hesitate on the legislation for fear of a backlash from China.

But he faced new pressure after Hong Kong voted decisively in local elections Sunday pro-democracy candidates, and his decision was welcomed even by his fiercest domestic opponents.

“This bicameral, bipartisan law reaffirms our nation’s commitment to democracy, human rights and the rule of law in the face of Beijing’s crackdown,” Democratic House speaker Nancy Pelosi said in a statement.

“I am pleased that the president signed this legislation and look forward to its prompt enforcement.”

On Tuesday, Trump said he was “with” the protesters, but quickly backpedalled, emphasising his close ties to Xi and efforts to secure a long-delayed resolution to the trade war.

“It’s going very well but at the same time we want to see it go well in Hong Kong,” he said. “I think it will. I think that President Xi can make that happen. I know him and I know he’d like to make it happen.”

Previous articleShould SC have intervened in General Bajwa’s extension matter?
Next articleHair Salon in Karachi by Transgenders for Transgenders

21 September 2021
Previous articleShould SC have intervened in General Bajwa’s extension matter?
Next articleHair Salon in Karachi by Transgenders for Transgenders

US Homeland Security chief Nielsen out as border crossings surge