A clean-up began across Hong Kong Saturday with pro-government groups removing bricks and debris from roads after a week of widespread disruption and violence. 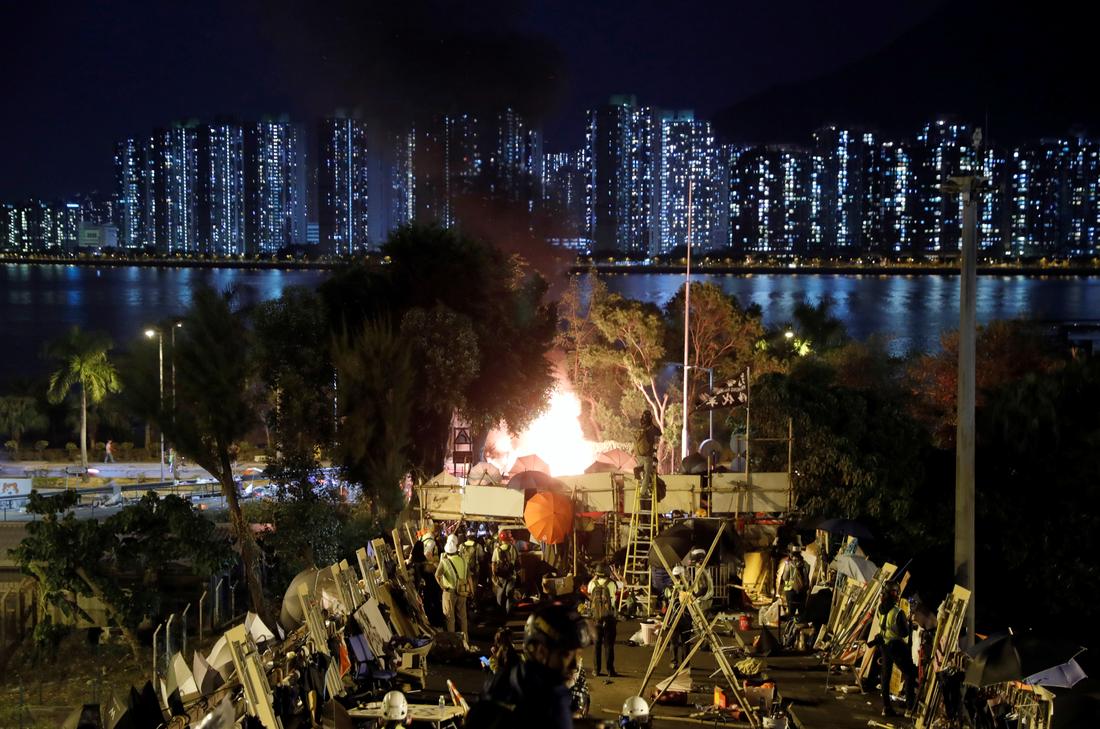 A clean-up began across Hong Kong Saturday with pro-government groups removing bricks and debris from roads after a week of widespread disruption and violence as pro-democracy protesters changed tactics to sink the city deeper into chaos.

Their “Blossom Everywhere” campaign of roadblocks, vandalism and protest across the semi-autonomous financial hub shut down large chunks of the train network, forced schools and shopping malls to close and stretched police resources.

With China offering no concessions, #HongKongProtesters have switched tactics to 'blossom everywhere' campaign to cause maximum disruptionhttps://t.co/Gc0hhKRwMb

The tactic blocked major intersections and highways with barricades made from bricks, furniture, bins and steel barriers, while university campuses became bases for stockpiling petrol bombs and supplies.

On Saturday, hundreds of government supporters began knocking down improvised walls concreted into the road by pro-democracy protesters, whose demonstrations have rocked Hong Kong for more than five months.

Waving Chinese national flags and posters, they chanted slogans including “support police to enforce law solemnly” and “Hong Kong cockroaches, trash of our times” — mocking one of the democracy movement’s major slogans, “reclaim Hong Kong, revolution of our times”.

As the afternoon wore on, scores of broad-shouldered men with crew-cuts and wearing identical gym kits emerged from the barracks of the People’s Liberation Army (PLA) in Kowloon in ranks, swiftly removing bricks from the road and scooping up debris.

It was not immediately clear who the men were but they jogged back to the garrison after a lightning-quick organised clean.

Chinese soldiers from the Hong Kong garrison are rarely seen outside — especially on the street in formation — and any deployment is likely to heat up tensions in the city.

China, which regained control of Hong Kong from the British in 1997, has ramped upped its rhetoric against the protesters, with President Xi Jinping this week warning the protests threatened the “once country, two systems” model under which it is governed.

Protesters accuse China of chipping away at the unique freedoms enjoyed by Hong Kong compared with the rest of the mainland and fear a military response from Beijing as the unrest deepens.

Anti-China students and activists fortified campus occupations on Saturday as Hong Kong braced for more violence for a sixth day of protests. pic.twitter.com/onNHpG1Lky

Hong Kong is a city divided.

Comments on a Facebook feed of the clean-up reflected that schism, with some applauding the effort by the men based in the garrison and others calling any PLA deployment “unconstitutional” under the handover agreement.

Arguments and scuffles also broke out on Saturday between pro-government and pro-democracy activists still occupying parts of a university campus.

Elsewhere at the Hong Kong Polytechnic University in Kowloon, student protesters also began clearing rubbish, but insisted they wanted to maintain an occupation of the campus and keep control of one of the major tunnels to Hong Kong Island.

The Cross-Harbour tunnel has been closed since Tuesday, its toll booths torched and piles of rubble laid across the road.

“We are here for the long term,” a 20-year-old student who identified himself only as E said.

The Hong Kong government, however, warned its employees they will be suspended if they are caught taking part in protests.

“We want to do our part and come back to help clean up while it’s not so tense today.”

A 21-year-old student who identified herself as Mario said they intended to continue the strike next week.

“That’s how I feel, but I have to emphasise that in this movement everyone is an individual, there’s no way to ensure that everyone’s thinking the same thing.”

Hong Kong confirmed that it had fallen into recession as the financial hub felt the impact of protests that have been going on for months and the effects of the U.S.-China trade war https://t.co/KaKze3Ten2 pic.twitter.com/KiwixNLyIT

Students and protesters this week occupied several major universities around the city — the first time a movement characterised by its fluidity and unpredictability has coagulated in fixed locations — although numbers had dwindled by Saturday.

Earlier on Saturday morning a group of around 500 people, mostly middle-aged and senior citizens, rallied outside the Hong Kong government’s headquarters to show support for the police, who have been heavily criticised over their handling of the crisis.

Waving Chinese national flags and posters, they chanted slogans including “support police to enforce law solemnly” and “Hong Kong cockroaches, trash of our times” — mocking one of the democracy movement’s major slogans, “reclaim Hong Kong, revolution of our times”.

The demonstrators took photos with the stationed riot police and gave them thumbs-up signs.

The CEO of Cathay Pacific Airways has resigned after Hong Kong’s flagship carrier came under fire from Beijing over its employees participating in protests https://t.co/X7CbTJtQhg

The Hong Kong government, however, warned its employees they will be suspended if they are caught taking part in protests.

According to the Hong Kong government, the civil service employs around 175,000 people, which is about 4.4 percent of the city’s workforce.

Protests have swept Hong Kong since June as many in the city of 7.5 million people have vented fury at eroding freedoms under Chinese rule.

Violence has escalated, and tensions have spread overseas, sparking friction between China and Britain, which governed Hong Kong until 1997.

Cheng walked away without signs of injury, but Beijing slammed the incident as an “appalling attack” and accused Britain of fuelling the protest movement.