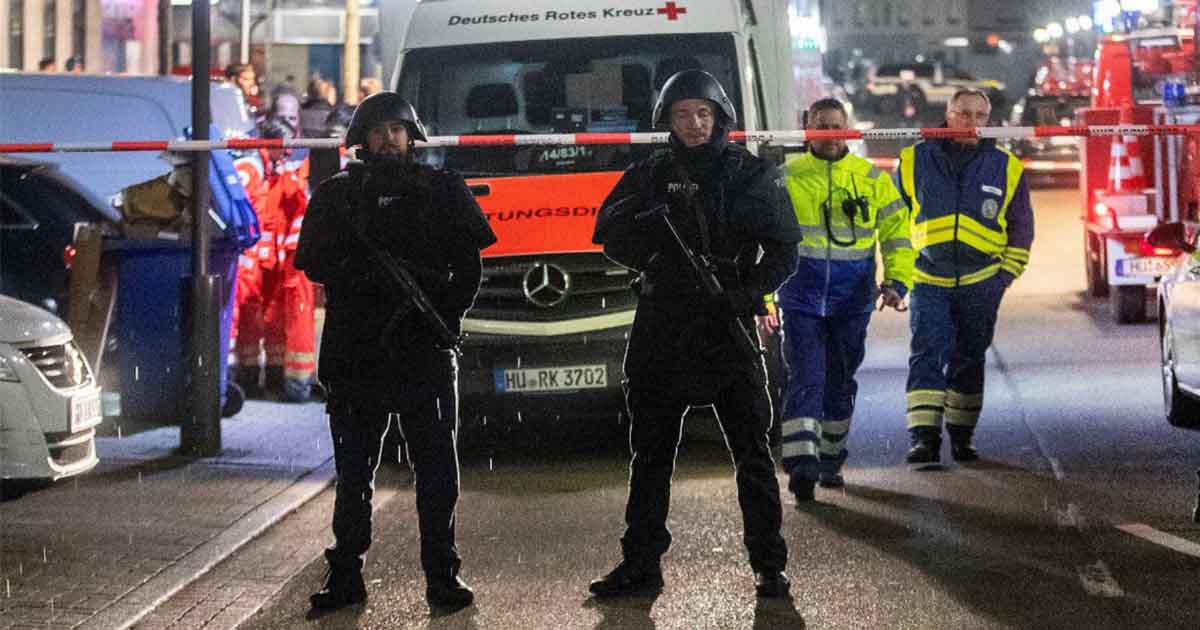 At least nine people were confirmed dead in shootings targeting German shisha bars that sparked a huge manhunt overnight before the suspected gunman was found dead in his home early Thursday.

The attacks occurred at two bars in Hanau, about 20 kilometres (12 miles) from Frankfurt, where armed police quickly fanned out and police helicopters roamed the sky looking for those responsible for the bloodshed.

Police in the central state of Hesse said the likely perpetrator had been found at his home in Hanau after they located a getaway vehicle seen by witnesses. Another body was also discovered at the property.

“The suspected perpetrator has been found dead,” police in the central state of Hesse said, adding: “There is currently no indication that there are additional perpetrators.” The mass-circulation Bild said that those killed in the first bar were of Kurdish origin.

The first attack occurred at the “Midnight” bar in the centre of the city around 10pm (2100 GMT), reports said. Three people were killed in front of the building, local media said, with witnesses reporting hearing a dozen shots.

The attacker, or attackers, fled the scene by car, according to police. There was then a second shooting at the “Arena Bar”. A gunman reportedly rang the doorbell and shot people who were in the smoking section, killing five people including a woman, Bild said.

“The victims are people we have known for years,” said the bar manager’s son, quoted by DPA news agency. Two employees were among the victims, according to the man, who was not at the bar during the shooting. “It is a shock for everyone”.

Police said one of those injured in the attack had also died. Earlier reports said five people had been seriously wounded.

A silver Mercedes-Benz covered by what looked like a survival blanket could be seen behind a police cordon and surrounded by officers in front of the “Arena Bar”, with shattered glass on the floor.

“The search for suspects is going at top speed. There is no clear information yet as to a motive,” authorities said.

The mayor of Hanau, Claus Kaminsky, told Bild that it had been “a terrible night”. “You could not imagine a worse night. It will of course keep us busy for a long, long time and remain a sad memory.”

“I am deeply moved. Just the fact that eight people have lost their lives has shaken me up. But I ask all citizens not to speculate.

“The police must have the chance to clear up the situation and investigate — until then, we should wait with prudence, no matter how hard this maybe.” Katja Leikert, the MP for the region, said it was “a real horror scenario”.

“On this dreadful night for Hanau, I would like to express my deepest condolences to the relatives of those killed. I hope the injured will recover quickly,” she said.

Germany has been targeted in recent years by several extremist attacks, one of which killed 12 people in the heart of Berlin in December 2016. Far-right attacks have become a particular concern for German authorities.

In October, a deadly anti-Semitic gun attack in the eastern city of Halle on the holy day of Yom Kippur underscored the rising threat of neo-Nazi violence. The rampage, in which two people were shot dead, was streamed live.

Last June, conservative politician Walter Luebcke, an advocate of a liberal refugee policy, was shot at his home.

Read more: The AR-15 rifle used in US mass shootings is going out of business

On Friday police arrested 12 members of a German extreme-right group believed to have been plotting “shocking” large-scale attacks on mosques similar to the ones carried out in New Zealand last year.

German-Turkish Islamic organization Ditib, which funds around 900 mosques in Germany, called for greater protections for Muslims in the country, saying they “no longer feel safe” in Germany.

PUBG gets Massive upgrades for Players to enjoy the Battlefield