Seven people were shot in Seattle on Wednesday, authorities said, and one of them succumbed to their injuries. It was the third shooting in the area in less than two days, and the latest incident of gun violence that continues to affect public places including schools, colleges, churches and cinemas across the United States. 418 Mass Shootings happened in 2019, 15 have taken place so far in January 2020. 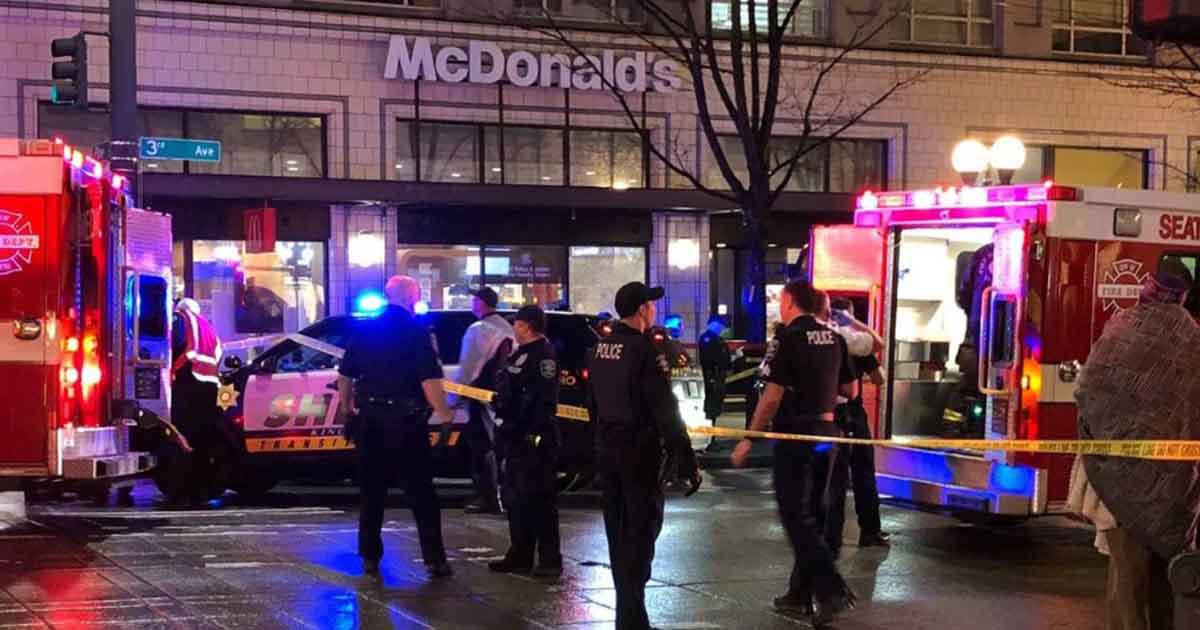 At least one person was killed and seven others injured — including a child — after gunfire broke out in downtown Seattle due to a dispute in front of a McDonald’s on Wednesday night, police and hospital officials said.

Police said at least one suspect was being sought in connection with the mass shooting that took place near a popular tourist destination, the Pike Place Market.

It was the third shooting in the area in less than two days, and the latest incident of gun violence that has affected churches, cinemas and other public places in the United States.

Reporter on the ground sees multiple down https://t.co/cNEifpNshr

“Officers investigating shooting near 4th and Pine,” the Seattle Police Department said in a tweet. “Multiple victims. The suspect has fled, and police are searching for him. Officers and medics are providing first aid to the injured.”

Even one incident of gun violence is one too many. We will relentlessly investigate tonight’s shooting at 3rd and Pine until all those responsible are brought to justice. In the meantime, expect to see police officers on this block until further notice.

Seattle Police Chief Carmen Best said police were still searching for the shooters, and trying to determine how many were involved. She said the shooting was not random.

“This was a dispute that happened in front of the McDonald’s. People pulled out guns, shots rang out, people ran in various directions, and as you know, we had multiple people injured,” she told reporters Wednesday night.

Police ordered people to stay out of the area and shut down a subway station as they searched for one or more suspects.

Read more: The AR-15 rifle used in US mass shootings is going out of business

Tyler Parsons, an employee at Victrola Coffee Roasters, told The Seattle Times that he was working when he suddenly saw victims falling to the ground as shots rang out.

He said several people ran into his shop to seek cover and he saw two people with gunshot wounds.

“The shooting was just kind of terrifying. Terrifying it’s so close,” he told the paper.

Another shooting in Seattle! Mitch McConnell can call for 12 hour days for the Senate Impeachment Hearing but can’t do any of the work on his desk otherwise. Every single mass shooting victim’s blood is on #MoscowMitchTraitor’s hands. #seattleshooting

One body covered with a white tarp could be seen in TV images lying on the sidewalk in front of the McDonald’s two hours after the shooting.

It was unclear if any of the victims were tourists.

Susan Gregg, a spokesperson for Harborview Medical Center, said a 55-year-old woman shot in the abdomen was rushed into surgery and the boy, who was shot in the leg, was in serious condition. The other victims — five males — are in satisfactory condition, she said.

Gregg added that the nature of the injuries varied from grazing wounds to life-threatening injuries.

Read more: President Trump condemns back-to-back mass shootings in the US and calls for background checks

One witness interviewed by local media said he had seen two men arguing loudly before they started shooting at one another, hitting bystanders.

United States continues to suffer from gun violence and mass shootings. Almost 40,000 Americans died out of gun related violence in 2019 alone – around 24,000 of them committed suicide. There were 418 incidents of mass violence where a gun man targeted two or more than two persons at one place. More than 200 children died and more than 400 were injured.

In 2018, more than 55,000 gun related incidents took place including 337 acts of mass shootings leading to almost 15,000 deaths. In 2017, around 40,000 people died from various firearms-related incidents, including suicides and homicides across the US, according to government figures. Despite this, the US political system has so far been unable to place effective controls on possession of guns by private citizens.

One aspect of this political wrangling relates to powerful lobbies like National Rifle Association (NRA) that finances political campaigns of Congressmen and Senators. This Republican leaning body wields tremendous influence on policy making. In recent years, Obama and then Trump administration have taken steps to restrict access to automatic weapons but whatever has been done is insufficient – and American nation continues to suffer from gun violence.

Putin’s Russia on top yet again