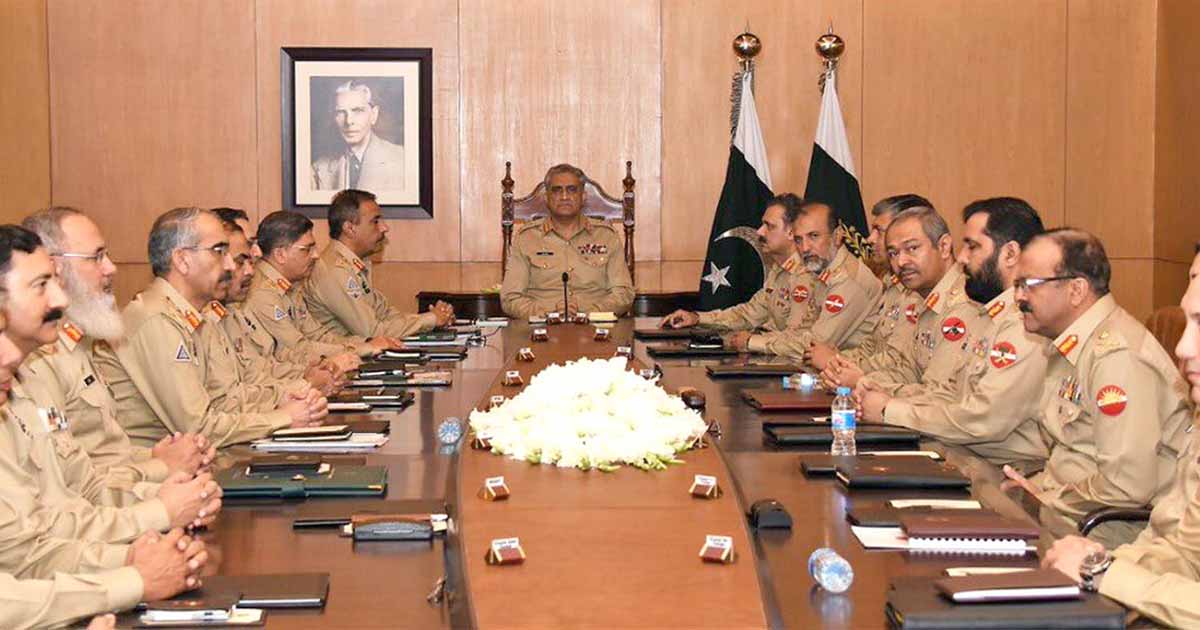 A corps commanders’ meeting was held in GHQ on Thursday. The military commanders pledged to defeat the designs of hostile agencies through ‘whole of the nation approach’.

It was discussed how hostile agencies working in Pakistan are trying to destabilize and slow down the CPEC project along with security and development of Pakistan.

CCC.Hostile design ‘ll be defeated through whole of the nation approach. Sacrifices by resilient people of Pak/forces shall not go waste,IA. pic.twitter.com/ztaVrDlwPF

With focus on internal security of the country, Pak-Afghan border tension and ceasefire violation by India were also reviewed in this forum.

Earlier in the day, Pakistan and India established a hotline contact through the directors general of military operations (DGMOs). In which India expressed concerns about terrorist movements along the LOC.

ISPR’s Director General Maj Gen Asif Ghafoor tweeted that Pakistan’s DGMO strongly rejected Indian concerns over the movement of terrorists along the Line of Control (LoC).  “The Indian army [has been] asked to look inward and share evidence.”

The Corps Commanders meeting took place, while similar meeting was being held by parliamentary parties to discuss the revival of military courts. These courts had been established after the terrorist attack on Army Public Shool in Peshawar on Dec 2014.

While appreciating the combined efforts of Pakistan Air Force (PAF) and Navy, General Bajwa alleged, “The RuF is a comprehensive across-the-board operation against terrorists and terrorism and not against any particular race, sect or group.”

The Corps Commanders also acknowledged, the efforts put in by Police, intelligence agencies and rangers during the conduct of PSL (Pakistan Super League) in Lahore for security arrangements.

In addition, General Bajwa told the participants about discussions held with government authorities during the last security conference that included phase fencing of Pak-Afghan border, Afghan refugees repatriation, judicial, police and educational reforms as well as restarting the implementation of death sentences to the terrorists awarded by military courts.

Crackdown on social media draws ire from all quarters