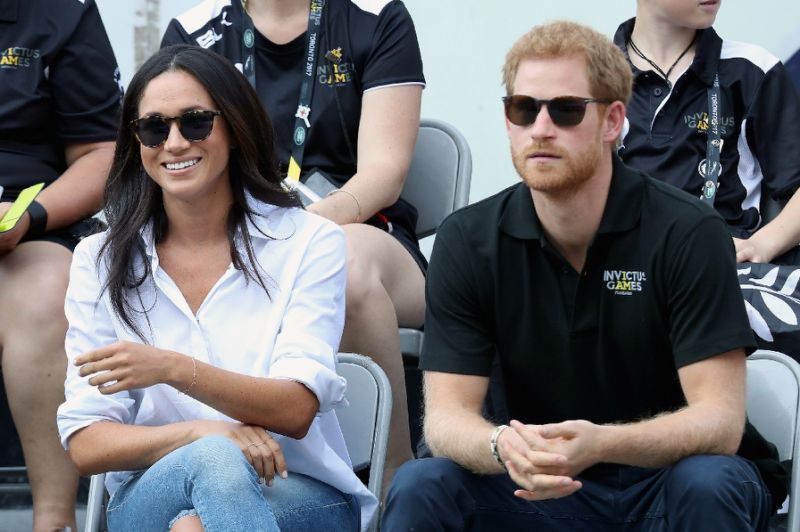 Muted colours, long dresses and chaste necklines: Meghan has had to tone down her fashion choices since marrying Prince Harry in May but still occasionally displays some of her past style. It was a question that many asked ahead of the wedding: would the chilled-out Los Angeles actress frequently seen in short skirts and sandals fit into the British royal family mould?

Would the newly-minted Duchess of Sussex imitate the typically English conservative style associated with Kate, the Duchess of Cambridge, wife of her brother-in-law Prince William? Would Meghan, who turns 37 on Saturday, have to become demure?

“Before the wedding, Meghan cultivated a casual Californian look that was a nod to her LA upbringing,” Elizabeth Vollman, who manages the website Meghan’s Fashion, told AFP. “Since becoming a duchess, her style has had to evolve to befit her new royal role and she has dropped the effortless chic look in favour of a tailored and demure style, opting for French designers and neutral shades,” she said.

At her first public engagement on May 22, three days after her wedding, Meghan wore a long pale pink dress by Goat, a British designer, along with a hat, a handbag and stockings.

Meghan, who starred in the hit US television legal drama “Suits” before giving up acting, told the website Outnet.com last year that she felt most comfortable in “jeans, cut-offs and flip-flops”. In one of her first public appearances alongside Harry in Toronto in September last year, she wore a pair of ripped jeans and a loose-fitting boyfriend shirt. It was less than a year ago but an age ago in terms of her personal fashion evolution.

Read more: Harry and Meghan to head Down Under later this year: palace

Of the wedding day itself, McCartney said: “I think it was the last moment that she could reflect sort of the other side to her: the joy and the human within her.” Belonging to Britain’s House of Windsor means representing the monarchy at closely-watched public events — where any sign of fashion extravagance is duly noted.

It was a question that many asked ahead of the wedding: would the chilled-out Los Angeles actress frequently seen in short skirts and sandals fit into the British royal family mould?

At her first public engagement on May 22, three days after her wedding, Meghan wore a long pale pink dress by Goat, a British designer, along with a hat, a handbag and stockings. She has shown signs of at least some originality, however.

“Meghan has occasionally pushed the boundaries of the royal dress code,” said Vollman, pointing to a “daring” shoulder-baring sleeveless outfit by Carolina Herrera she wore at the Trooping of the Colour military parade in June.

Meghan also frequently wears French designers such as Dior or Givenchy — a sign that she will not only wear British designers. “Meghan is more attuned to trends and has more freedom to take fashion risks compared to the Duchess of Cambridge,” said Vollman.

“It’s exciting following Meghan’s style because you can never predict who or what she will wear for an event.” The Daily Mail newspaper said Meghan wore boat neck dresses in order to “respect protocol, while still looking ‘a little sexy’.”

But the tabloid went on to say that her fashion choices had led to “friction” and were “barely tolerated by royal aides”. Harry himself, the report said, had stepped in to ask her not to wear a tuxedo suit on an upcoming royal visit.

Indian Muslim Women suffering because of abuse of Islamic Law

Rahul vs the RSS: War of words continues after Muslim Brotherhood comparison