Hafiz Pasha insists PTI is pushing Pakistan into abject poverty with its ill-informed economic policies but some question the validity of his argument.

According to claims by former Finance Minister Dr. Hafiz A Pasha, 18 million more people may slip into abject poverty due to low economic growth and double-digit inflation experienced under PTI’s government. However, some question the validity of his argument.

The national poverty ratio, which was 31.3% in June 2018, would sharply jump to over 40% by June 2020, said Pasha in an article that first appeared in Business Recorder.

You have the makings of an Arab Spring in this country, said Dr. Pasha, referring to the popular uprisings in Arab nations starting in 2011. This is a bomb waiting to explode

In absolute terms, people living in poverty will increase from 69 million in June 2018 to 87 million by June 2020, indicating 26% increase in poverty or an addition of 18 million people in first two years of the PTI government.

Initial indications for 2019-20 are not encouraging. The, more or less, common expectation is that GDP growth rate will be close to 2.4 percent. As such, there will be no increase in per capita income. Food prices are rising much faster by almost 5 percentage points in comparison with the overall rate of inflation. However, the increase in inequality may be limited by the expected increase in the tax-to-GDP ratio and because of more employment created by higher development expenditure. 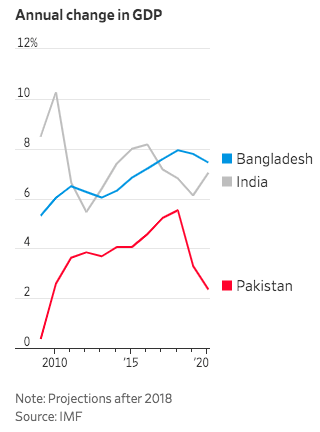 Projections of the future level of poverty require a clear and precise understanding of the primary determinants of poverty. Past empirical research in Pakistan reveals that there are four factors which determine the direction and extent of change in the incidence of poverty.

First, the higher the growth rate is in real per capita income the greater the likely reduction in the incidence of poverty. Second, the ‘trickle-down’ effect is larger if there is reduction in income inequality and the gap narrows between the income shares of the top 20 percent and the bottom 20 percent of the population. Inequality is more likely to fall if there is faster employment growth and the tax-to-GDP rises.

Third, relatively stable food prices play an important role in preventing increase in poverty. Fourth, the level of real pro-poor expenditure is also a factor is poverty alleviation. This expenditure includes spending on education and health and on social protection.

Pasha said that the government’s decision to simultaneously increase taxes, energy tariffs and devaluation of currency contributed to the increase in poverty. He said that the Pakistan Muslim League-Nawaz (PML-N) government’s decision to keep the rupee-dollar parity stable kept the inflation under check. The PTI government is implementing probably the toughest International Monetary Fund (IMF) programme of the country’s history aimed at overpowering fiscal and external accounts challenges.

However, some stand to question the legitimacy of Dr. Pasha’s comments arguing that while he currently notes the improvements during PML-N’s era and criticizes PTI’s policies such as currency devaluation

By June next year, four out of every ten Pakistanis will be poor, according to Dr Pasha’s working. Dr. Pasha is the former finance minister of Pakistan and has also advised Prime Minister Imran Khan at the time of building consensus on signing an IMF programme.

Pasha has been previously critical of PTI’s economic policies as well as he was cited in The Wall Street Journal in October questioning their ability to create jobs. He estimated that by the end of Khan’s second year as PM, two million workers will have lost their jobs and up to eight million people will be pushed into poverty.

"Former Finance Minister Hafiz Pasha, an economist, estimates that by the end of Mr. Khan’s second year, two million workers will have lost their jobs and up to eight million people will be pushed into poverty."@SaeedShah’s sombre report: https://t.co/1YtUqf7znW

“You have the makings of an Arab Spring in this country,” said Dr. Pasha, referring to the popular uprisings in Arab nations starting in 2011. “This is a bomb waiting to explode.”

Dr. Pasha said the government, in the IMF program, had over-adjusted the economy, and instead of going after the rich for tax revenue was unnecessarily targeting small traders.

Opposition leaders were quick to jump on the PTI bashing bandwagon.

Thanks to this govt, 18 million more may fall below poverty line as inflation rises and growth contracts. That's a 26% increase in poverty#Pakistan https://t.co/1F6LeOn5Wv

However, some stand to question the legitimacy of Dr. Pasha’s comments arguing that while he currently notes the improvements during PML-N’s era and criticizes PTI’s policies such as currency devaluation, he gave eerily similar remarks regarding PML-N in his book “Growth and Inequality in Pakistan: Agenda for Reforms”.

Dr. Pasha wrote, “we found out that poverty incidence in Pakistan was 38%, as opposed to Planning Commission’s claim that it decreased to 24.3%” questioning statistics advertised under their administration.

Read more: $1 Billion of Foreign Investment in Pakistan: Positive sign for the Government?

Furthermore, Federal Minister for Planning and Development Asad Umar responded to Dr. Pasha’s data on Pakistan’s poverty saying “we do not have latest official poverty statistics”

The minister said the country was exiting a severe balance of payments crisis which had its own implications. Umar said the PTI government accelerated the poverty alleviation measures aimed at protecting the poor and vulnerable people from the adverse impact of macroeconomic adjustments.

However, other economists came to the government policies’ defense stating the high interest rate of 13.25% is a necessity given inflation stands at 12.6%

Dr. Pasha’s comments came soon after his critique of the recent inflow of hot money, saying the government is prioritizing macroeconomic factors such as foreign investment that are not helping microeconomic conditions consequently slowing down economic activity and raising inflation.

However, other economists came to the government policies’ defense stating the high interest rate of 13.25% is a necessity given inflation stands at 12.6%, all investors whether local or foreign must be treated equal, and Dr. Pasha’s analyses is limited as he fails to incorporate other factors that contributed to economic slowdown.

Previous articleZardari granted bail on medical grounds: Is he going abroad too?
Next articleTurkish President Erdogan will decline Nobel Prize if awarded