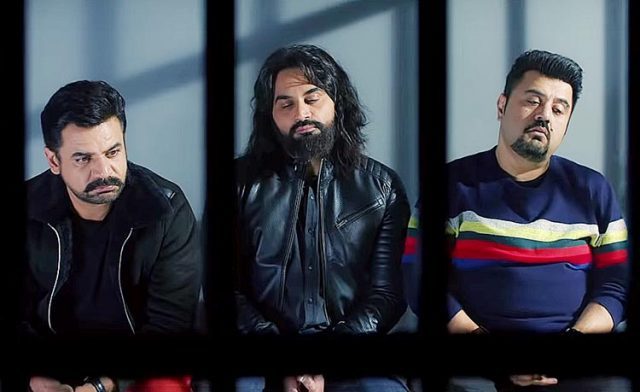 Jawani Phir Nahi Ani became the biggest box office success in Pakistan’s entertainment history, chalking up $49.44 crore back when it was released in 2015. The sequel, with its ensemble cast of Fahad Mustafa, Vasay Chaudry, Humayun Saeed, Ahmad Ali Butt, Mawra Hocane and Kubra Khan, is already shaping up to be a massive hit. And with Saeed suggesting that there are surprises in store for fans, the release date for the film can’t get here fast enough!

Directed by Nadeem Baig, the first movie came out in September 2015, boasting the talents of Humayun Saeed, Vasay Chaudhry, Hamza Ali Abbasi, Ahmed Ali Butt, Sohai Ali Abro, Mehwish Hayat and other A-list Pakistani actors. Despite mixed reviews, the film’s good word of mouth resulted in it amassing almost six times what was spent in the making of the film. The action comedy revolved around three friends in miserable marriages and their friend who took them on an impromptu trip to Bangkok on a guys-only vacation.

Hamza Ali Abbasi refused to be the part of the second part of the movie, stating “I don’t agree with the genre of it and won’t be doing it”. He further turned down the rumors hinting that it was due to a rift between him and Hamayun. He expressed, “it was a mutual decision, we’re friends and there are no issues between myself and Humayun.” His role has been taken up by Fahad Mustafa.

The sequel is said to be partly shot in Turkey while some portions being filmed in Dubai.

With so much international exposure and A-list actors, the fans are anxious to get a glimpse of the upcoming movie, which is supposed to be released on Eid-ul-Azha.

To add to this, rumors suggest that Indian actors Kanwaljit Singh, said to perform the role of Kubra Khan’s father, and Shahzad Khan are also a part of the project. The actor and producer of the film, Humayun Saeed himself has opened up about the rumors stating to Something Haute, “It’s true. We have Indian actors working in the film. But if you thought that was the only surprise, brace yourselves. There are many more surprises yet to come.”

The actor dished on the behavior of the Indian actors, saying, “They are very professional and dedicated. It’s wonderful to have them on our team.”

Jawani Phir Nahi Ani 2 has already received warm wishes from a big Bollywood star, with Varun Dhwaun wishing the team behind JPNA2 good luck. Actor Ahmed Ali Butt recently shared a video on Instagram of the Bollywood heartthrob sending loving to Pakistan.  Whether some other Bollywood actors will appear in the film or not isn’t known yet, but if that is the case, JPNA2 could easily become a bigger hit than its predecessor.

The 5 Most Anticipated Hollywood Movies in 2020