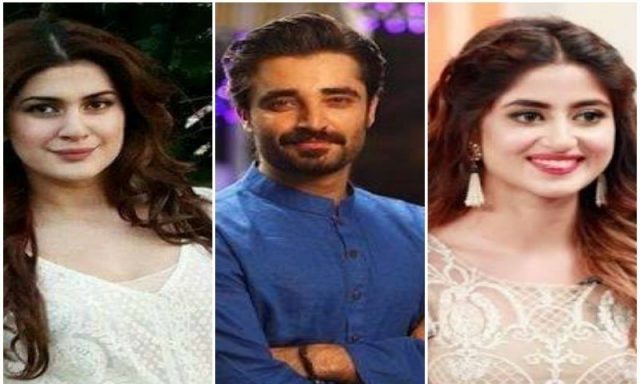 Hamza Ali Abbasi has finally chosen his next TV role. The Pakistani actor last graced our screens in 2016 through Hum TV’s Mann Mayal and before that through the romantic comedy Jawani Phir Nahi Ani.

Both the drama and the film were huge hits, with the drama series becoming the highest rated TV series in Pakistan’s history and Jawani Phir Nahi Ani becoming the highest-grossing Pakistani film of all time. It’s no surprise Abbasi has established himself as one of Pakistan’s biggest stars. Now he is joining forces with Sajal Ali and Kubra Khan in an upcoming TV series entitled Alif.

Kubra Khan is a lesser known name, though we have seen her in dramas like Sang-e-Mar Mar and the film Na Maloom Afraad.

Samina Humayun Saeed recently opened up about the upcoming drama series stating “Every character in the play questions themselves on something and being the first alphabet, ‘alif’ is the answer to every question. The drama is about soul searching; it’s a passion project.”

The drama will be penned by Umera Ahmed who has been behind hits such as Maat, Shehr-e-Zaat and Zindagi Gulzar Hai. Fans are no doubt going to be excited to see Sajal Ali and Hamza Ali Abbasi pair up for the first time together. Another interesting thing about the project is that it’s said to be choke-full of surprising cameos and appearances.

Read more: There was a time where I wanted to perform an item..

The drama being directed by Haseeb Hassan (who directed Mann Mayal) is said to begin production this June with a release date of September or October in the back half of the year.

Sajal Ali who is coming hot on the heels of her Bollywood debut Mom and ARY Digital series Noor ul Ain has already become one of Pakistan’s most recognizable faces. Kubra Khan is a lesser known name, though we have seen her in dramas like Sang-e-Mar Mar and the film Na Maloom Afraad. It’s certainly going to be interesting to see whether Sajal Ali, Kubra Khan and Hamza Ali Abbasi can make Alif an unforgettable drama series.

Avengers will travel back in time: Fourth sequel reveals