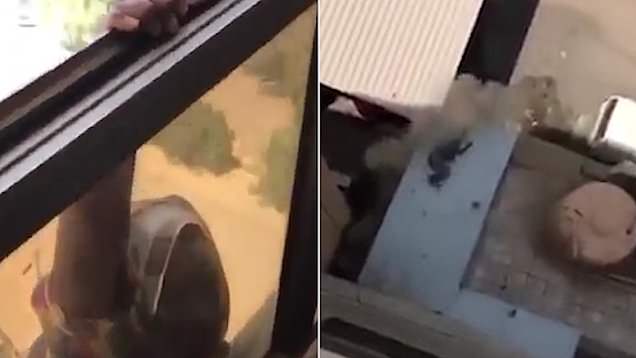 Kuwaiti police have detained a woman for filming her Ethiopian maid falling from the seventh floor in an apparent suicide attempt without trying to rescue her. The Kuwaiti woman filmed her maid land on a metal awning and survive, then posted the incident on social media, Al-Seyassah newspaper reported.

The 12-second video shows the maid hanging outside the building, with one hand tightly gripping the window frame, as she begs for help in an apparent last-minute change of mind.

Read more: Is Kuwait on the verge of an economic crunch?

The woman holding the camera is heard telling the hanging maid: “Oh crazy, come back.” The terrified maid is seen screaming “hold me, hold me”, just before her hand slips and she falls down to hit the awning, which appears to soften the impact.

The employer made no reaction as she continued filming. Later, paramedics rescued the maid and rushed her to the hospital where she was found to have suffered nose and ear bleeding and a broken arm, the newspaper said. The criminal investigation police referred the employer to the prosecution over failing to help the victim, the daily said.

The reasons for the maid’s attempted suicide were not revealed. The Kuwait Society for Human Rights on Friday called on the authorities to investigate the case and refer it to court.

The oil-rich Gulf state is home to more than 600,000 domestic helpers, a majority of them Asians, many of whom complain of abuse, mistreatment, and non-payment of wages. Hundreds of maids escape their employers every year because of domestic abuse, and the government has set up shelters for them. Some seek help from their embassies.

India And Nepal Must Build On Their Unique Political, Social And Economic Ties