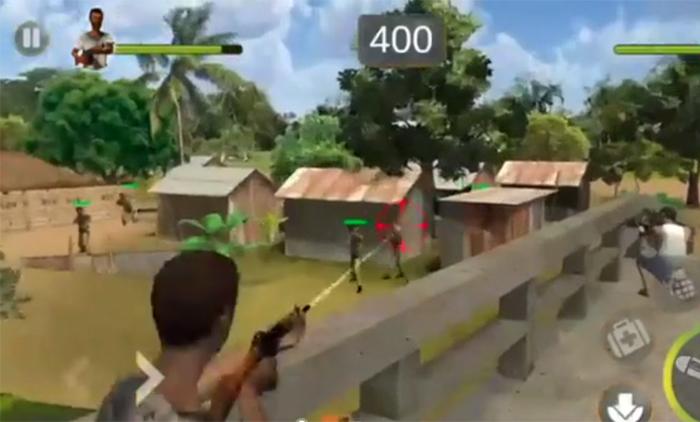 “Heroes of 1971: Retaliation” is currently the most popular video game in Bangladesh. It is set during the war of independence, which saw East Pakistan break away from Pakistan to become Bangladesh, and is a sequel to “Heroes of 1971”, which was released two years ago on the anniversary of the war which resulted in Bangladesh’s creation. The objective of both games is to liberate East Pakistan and, in the process, kill as many Pakistani soldiers as possible.

Shoot to kill. The aim is to gun down as many Pakistani soldiers as possible.

Interestingly, the game appears to have received some, if not all, of their funding from the government of Bangladesh. The credits state that they were sponsored by the ICT Division, a government ministry, and the Bangladesh Computer Council, a state-run body.

The original version’s graphics were terrible, but the opportunity to punish Pakistani soldiers made it a runaway success. The new version, which has been downloaded more than 4m times since it was released in 2016 on March 26th (Bangladesh Independence Day), is far superior. The graphics are snazzier and there’s an English language option.

It features a new character, Anila, an attractive female guerilla fighter freed from Pakistani captivity, and new missions, which include disrupting Pakistani supply lines, saving women from a Pakistani prison camp, and “a full frontal battle against great odds”. Players even have a chance to punish members of East Pakistan’s fundamentalist parties who collaborated with the Pakistani army.

Shoot to kill. The aim is to gun down as many Pakistani soldiers as possible. Both games can be played on a desktop computer or an Android phone. A parental guidance note says they may not be suitable for children under the age of 16, on account of their “strong violence”.

The war of independence – a nine-month struggle – was exceptionally bloody. According to Bangladeshi government’s claims, “Pakistani soldiers killed as many as 3m Bengali people, while 10m refugees fled to India.”

The Awami League, Bangladesh’s ruling party, works hard to keep memories of the war of independence alive. As well as sponsoring the video games, which are targeted at younger generations, it announced this year that March 25th (the anniversary of the so-called “Operation Searchlight”) would from now on be commemorated as “Genocide Day”.

Read more: ‘Let Us Bury the Past, Not the Future’: Pakistan and Bangladesh

It is in the League’s interests that no one should forget the war: independence, after all, is the party’s raison d’être. Established in 1949, two years after Pakistan and India had been partitioned, it led East Pakistan’s uprising and formed the first government of the new Bangladesh. The current prime minister (and Awami League leader) is Sheikh Hasina, daughter of the independence leader and first president, Sheikh Mujibur Rahman.

Over the decades, control of the country has alternated between the League, which is nominally secular, and the opposition Bangladesh Nationalist Party (BNP), which is more right wing, more Islamic, staunchly anti-Indian, close to the army – and, historically, to Pakistan. The last time it was in government (2001-06), it was in alliance with the Jamaat-e-Islami, the country’s largest Islamist party, which had opposed independence. The League took back power in December 2008, and has since created a formidable one-party state: the last elections, in 2014, were pretty much uncontested.

The credits state that they were sponsored by the ICT Division, a government ministry, and the Bangladesh Computer Council, a state-run body.

The Awami League maintains that its role in bringing about independence gives it a moral right to rule. One of the reasons it came to power in 2009 was its promise to prosecute the perpetrators of the mass murders and rapes during the war. Most of them have still not been brought to justice.

It set up a war-crimes tribunal in 2010, but this has only had limited success. A handful of Bangladeshi collaborators has been hanged or jailed for life. But there is no extradition treaty between Bangladesh and Pakistan, and thousands of Pakistani soldiers (not to mention members of pro-independence militias, who massacred people who sympathized with Pakistan) continue to evade justice.

For now, many Bangladeshis appear to be satisfied by getting virtual revenge on their old enemy. One gamer from Dhaka – who even wasn’t alive in 1971 – told me that playing “Heroes of 1971” made him feel “like I am fighting for my country’s freedom”.

This article was first published in The Economist.