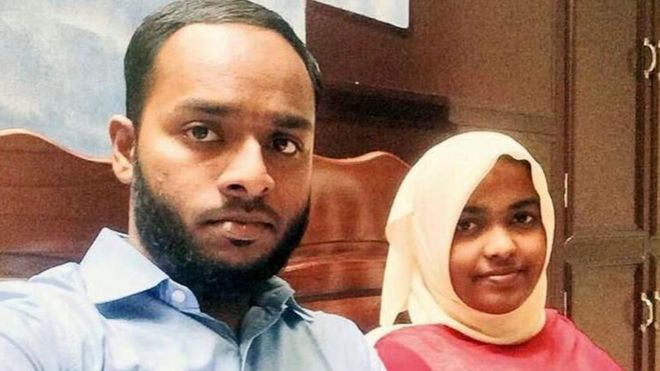 The petitioners said that propaganda being aired against them have endangered the lives of their families, adding that both the sisters were inspired from the Islamic teachings for long but never disclosed in public due to safety concerns.

Pakistan’s Minister for Information Fawad Chaudhry not only slammed her for peddling into internal matters of Pakistan but also advised her to focus on the state of minorities in India.

The petitioners also reportedly said that they accepted Islam with their choice and requested for protection from the security authorities. The IHC’s Justice Athar Minaullah will hear the petition today.

It is pertinent to mention here that the family of the teenage girls claimed that the sisters were abducted from their residence, and forcefully converted them to Islam before they were subjected to underage marriages. The incident came to light after the girls’ father and brother revealed the details in videos that went viral on social media.

Prime Minister Imran Khan ordered Sindh and Punjab governments to look into the matter and furnish the report of the same.

Read more: It’s not Modi’s India: Fawad claps back at Sushma Swaraj over…

India External Minister Sushma Swaraj also intervened into the matter and asked Indian high commission in Pakistan to present a report of the incident. Pakistan’s Minister for Information Fawad Chaudhry not only slammed her for peddling into internal matters of Pakistan but also advised her to focus on the state of minorities in India.

A 2018 report by the University of Birmingham suggests that an estimated 1,000 women and girls from religious minorities are abducted, forcibly converted and then married off to their abductors every year in Pakistan.

In Pakistan, it is a general cultural norm that if girls leave their homes to marry the person of their choice, the family gets an FIR registered against the boy for kidnapping the girl.

In November 2016, a Bill was passed unanimously by the Sindh Provincial Assembly to stop the forced conversion in the province. The bill became controversial for the reason that it contained a provision under which no one under 18 could convert to Islam even out of his free will and choice. “Such a bar is not only considered against the teachings of Islam but also in violation of the Constitution”. Therefore, the Bill failed to make it into law as the then Governor, Saeed uz Zaman Siddiqui, returned it in January 2017. The Bill was effectively blocked by mobilization from various quarters.

Under the proposed law, perpetrators could face a minimum of five years and a maximum of life in prison, while minors were forbidden from converting to another religion.

It may be noted that Pakistan has signed and ratified the International Covenant on Civil and Political Rights and ratified the Convention on the Elimination of Discrimination Against Women (CEDAW), of which Article 16 confirms the right of every woman to enter into a marriage ‘only with their free and full consent’.

Political analysts and experts believe initial investigation and videos of girls confirm the assumption that it is a matter of marriage with free choice, not a case of kidnapping or forced conversion. It is believed that some Non-governmental organizations’ (NOGs) representatives took up the matter to pressurize the Sindh government to bring in the previous bill and present it before the assembly all over again.

In Pakistan, it is a general cultural norm that if girls leave their homes to marry the person of their choice, the family gets an FIR registered against the boy for kidnapping the girl. The recent figures show that 300 ‘kidnapping’ cases had been reported to the police in Islamabad which involved young girls. But in most cases – 250 to be precise – the girls eloped with their lovers to contract love marriage against the family wishes.

Furthermore, the court is to hear the case and will decide on the matter. However, it is important to note that there is no law in Pakistan which bars underage children converting their religion but there are some laws which specifically deal with the age of minor girls and boys to determine their standard age for marriage.