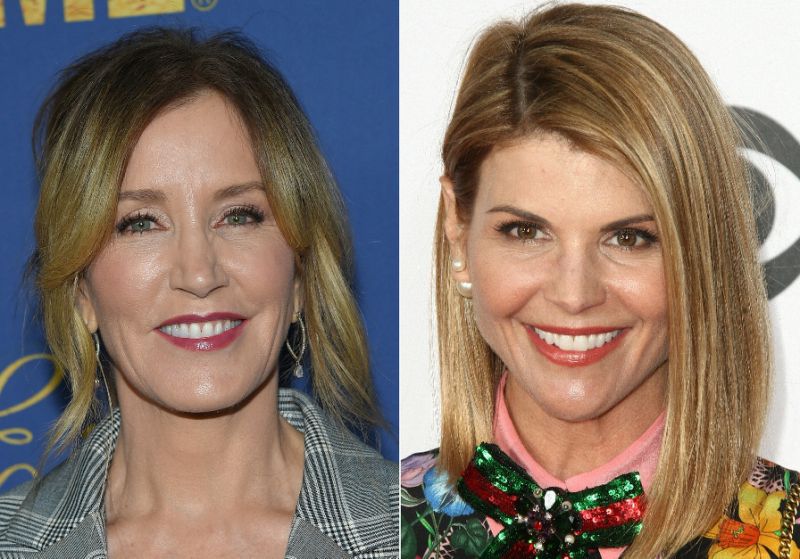 The accused, who also include chief executives, financiers, the chairman of a prominent law firm, a winemaker and fashion designer, allegedly cheated on admissions tests and arranged for bribes to get their children into prestigious schools including Yale, Stanford, Georgetown and the University of Southern California, federal prosecutors said.

Singer agreed to plead guilty to fraud charges and assisted investigators in obtaining evidence against his customers and co-conspirators.

They paid a bogus charity run by Californian William Singer more than $25 million over seven years both to arrange for people to fix SAT and ACT entrance exams for their children, and also to bribe university sports coaches to recruit their children, even when the children were not qualified to play at that level.

The case sparked outrage across the country, especially among parents who stress about the intense competition for places in universities and, more broadly, about privileged behavior among the richest Americans.

In all, 50 people were charged: 33 parents who paid to give their kids undeserved entry into high-end college life; 13 university sports coaches and test organization operators; and Singer and three others who operated the fraudulent scheme.

Thirteen of those accused, including Huffman, were arrested and slated for arraignment late Tuesday in Los Angeles. Others appeared in courts in Boston, New York, Connecticut and elsewhere. Loughlin was not arrested because she was in Canada.

The case sparked outrage across the country, especially among parents who stress about the intense competition for places in universities.

None of the universities or the companies who run the tests were implicated, and none of the students involved were charged. “These parents are a catalogue of wealth and privilege,” said Andrew Lelling, the US attorney in Boston, Massachusetts where the case was announced.

“Every year hundreds of thousands of hard-working, talented students strive for admission to elite schools,” he said. “There can be no separate college admission system for the wealthy, and, I’ll add, there will not be a separate criminal justice system, either.”

The scheme aimed to take advantage of the two years of the anxiety s parents across the United States often endure as they put high school-age children through the standardized tests needed to gain entry into heavily competitive colleges and universities.

Even legally, wealth plays a role. Parents who can afford to pay heavily for test preparation and have their children take the tests two or three times to better their scores. In this case, however, Singer arranged for someone to take the test for the students, or paid insiders to fix their scores.

None of the universities or the companies who run the tests were implicated, and none of the students involved were charged.

And, in a second part of the scheme, the “side door” operation, Singer would create bogus athletic profiles for the students and manage payoffs to university coaches in minor sports like soccer, crew, water polo and sailing so that the student could be accepted on that basis.

The payments were made to Singer’s fake Newport Beach, California charity, Key Worldwide Foundation, and to non-profits managed by the coaches, which allowed the parents to deduct the payoffs and bribes from their taxes. Singer agreed to plead guilty to fraud charges and assisted investigators in obtaining evidence against his customers and co-conspirators.

Parents paid as little as $15,000 and as much as $6 million to benefit from Singer’s operation. Huffman, 56, and her husband William Macy, the star of Showtime’s hit series “Shameless,” paid $15,000 for their first daughter to perform well on the test, but decided not to do the same with their second daughter.

Singer arranged for someone to take the test for the students, or paid insiders to fix their scores.

Macy was mentioned in the case but not charged. Loughlin, the 54-year-old star of “Full House,” and her fashion designer husband Mossimo Giannulli allegedly paid $500,000 to gain their two daughters entry into University of Southern California as coxswains for crew teams — a sport they hadn’t participated in before.

Gordon Caplan, co-chairman of New York law firm Willkie Farr & Gallagher, allegedly paid $75,000 to have his daughter’s test grades fixed. And William McGlashan, an executive at the huge investment group TPG Capital who specialized in technology investments, allegedly paid hundreds of thousands of dollars for both testings and being placed in the University of Southern California as a student-athlete.

“What is going to happen when they see his application, he’ll be flagged as an athlete,” Singer told him in a phone conversation recorded by investigators. “But once he gets here, he just goes, he doesn’t go to athletic orientation, He goes to the regular orientation like all my other kids just did… and everything’s fine.”

Coaches, including the women’s soccer coach at Yale University and the sailing coach at Stanford University, took between $200,000 and $400,000 to accept the students onto their teams. Some attempted to ply the sport and then quit; some claimed injuries and never joined the teams, others, Lelling said, “simply never showed up” to play.

Previous articlePashtun laborers killed in Afghanistan: Why is PTM silent?
Next articleWill Brexit be delayed? The hows and the whys

22 June 2021
Previous articlePashtun laborers killed in Afghanistan: Why is PTM silent?
Next articleWill Brexit be delayed? The hows and the whys

Saudi Arabia will always be a friend, OIC should play a bigger role in Kashmir: PM Imran