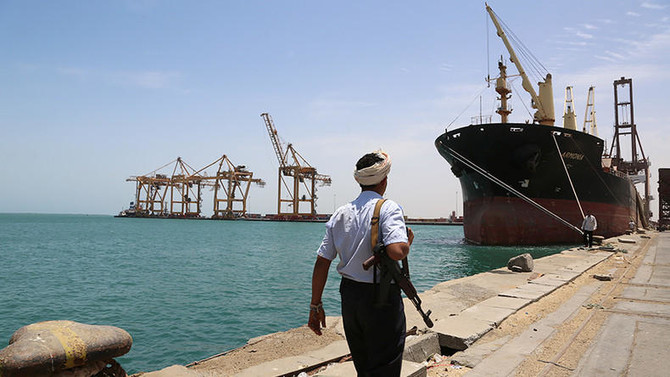 According to the Saudi news agency an oil tanker came under attack near the Yemeni coast suffering mild damage. “The Saudi oil tanker was subjected to slight damage due to the attack by the Houthi militia,” the statement said. Saudi Arabia is officially at war with Yemen, where  Shia Houthi tribes of northern Yemen have captured the majority of the north, including capital Sanaa, ousting the Saudi backed regime.

So far the war has just been confined to aerial strikes and blockade of imports into the country leading to a serious famine condition of the contemporary world.

The demand was addressed a month ago when Donald Trump decided to revoke Iran’s nuclear deal and now once again severe economic sanctions are looming over the country.

The Saudi-led coalition says one of the main justifications for its intervention is to protect shipping routes such as the Red Sea, which is used to bring Middle Eastern oil and Asian goods to Europe through the Suez Canal. It has said that it foiled previous attacks in the Red Sea in April and May.

In the past, Houthi rebels have threatened to block the significant sea trade passage. “If the aggressors keep pushing toward Hodeidah and if the political solution hits the wall, there are some strategic choices that will be taken as a no return point, including blocking the international navigation in the Red Sea,” Houthis’ Ansarullah political council chief, Saleh al-Samad, was quoted saying. “Their ships pass by our waters while our people starve,” Samad was quoted as saying while he met U.N. officials.

Read more: Saudi Arabia ready to raise oil supply after US pullout from…

Houthi rebels are known to be backed by Iran with logistical support, which Tehran has always denied. But it remains the fact that the long-range ballistic missiles which Houthis occasionally fire into the Saudi territory are Iranian made, and given the technological and economic constraints, there is no way they could have developed these weapons themselves. Hezbollah, a Shia militia group active in Lebanon and Syria, is being used to smuggle the weapons into Yemeni mainland.

One of the reasons for tense relations between Saudi Arabia and Iran is Iran’s expanding footprint in the region. On the other hand, it is also an established understanding, backed by leaked cables, that Saudi Arabia itself has been exporting its own brand of Islam and ideology since the cold war. There has not been a direct military confrontation between the two countries so far but the proxy war is still on in almost entire Muslim world.

Donald Trump, as the President of the United States of America, opted Saudi Arabia for his first official visit unlike his predecessor who used to go to Canada or Mexico. The visit earned United States billions of dollar in terms of contracts which Saudi Arabia signed to buy US weapons. But in return, King Salman and his son, Crown Prince Mohammed Bin Salman, asked Donald Trump to take a hard line against Iran. The kingdom was never happy with the way President Obama allowed Iran a safe passage and leniency in the form of JCPOA. The demand was addressed a month ago when Donald Trump decided to revoke Iran’s nuclear deal and now once again severe economic sanctions are looming over the country.

Read more: From oil to solar power: Saudi Arabia plans a shift to…

Iran feels threatened that once again the US will cripple its economy by banning the export of Iranian oil. Two days back Iran threatened to cut the supply of oil and other good to Gulf countries, specifically UAE if the sanctions are re-imposed. While it seems impossible for Iran to do so because of US naval presence in the Strait of Hormuz, the passage where Iran could halt the movement, it can use its proxy, the Houthis, sitting right next to Saudi Arabia to carry out more of such attacks. So far, the war between Houthis and KSA was limited to ballistic missile launches and aerial strikes by former and latter respectively. But now there seems to be a change in Houthi plans, targeting Saudi vessels in the Red Sea, which could well be on the direction of the state they are supported by, Iran.

If Iran manages to threaten the passage of Saudi Cargo ships through red sea shipping lane, it might be able to get the leverage it needs to find a way out of economic sanctions. In contrast to a direct confrontation with US Navy, which has a probability of much higher gain if Iran miraculously manages to secure a victory, this options presents much less collateral damage but the end result might as not well be that promising which Iran hopes.

Just half a tablespoon of “Olive Oil” daily can improve our Hearts!