New Delhi’s mysterious press release and framing in media on Soleimani's assassination as to that of Osama and Al-Baghdadi is indeed a stab in the back. This outcome has indicated that ideology is an actual determinant of foreign policy, and India compromising on Muslim states, will always side with the philosophical and strategic interests of Israel and United States in the long run. 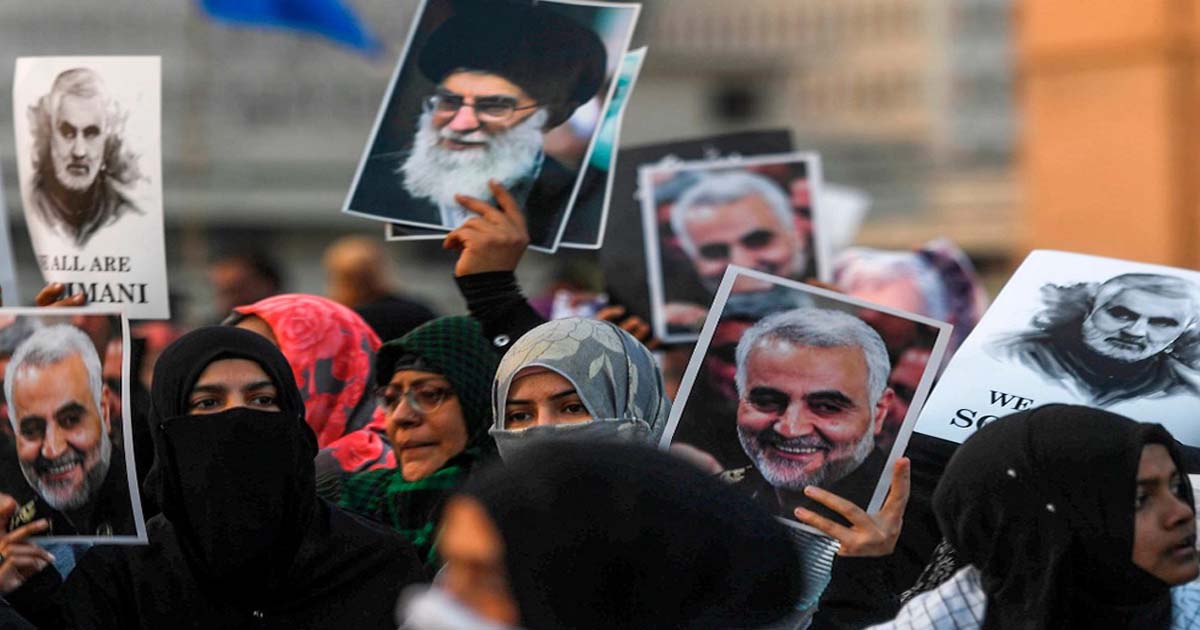 In the aftermath of the US assassination of Soleimani, the loopholes in Iran and India relations have been completely exposed. New Delhi and Tehran have been enjoying delicate relations in the economic domain since 2011. They reached to the mutual financial zenith with the inception of multi-billion Chahbahar port, which is somehow facing its demise.

However, in the context of strategic philosophy and rival ideologies among international alliances, we need to pay attention to how India reacted amid US Iran military confrontation. Before analyzing the carefully crafted official statements by India and media reporting, it is of utmost importance to understand the theory and strategic thought of India which determines its relations with others.

The origins of Indian strategic thought spawns solely from Hindu ideology. Similar to Israel’s claim to the holy land and Jewish claim to truth, Hindu also believes, their history will not end until Hindu claim to truth triumphs over the holy land of Bharat. On movement of history, Hinduism believes history moves in cycles and it has now arrived at a point where one cycle is about to end and another one will replace it with the Hindu golden age.

India is the only state in the world for Hindus. And Hinduism believes that India is their only Holy Land, which they call it as Maha-Bharat or Akhand-Bharat. A land, where only Hindus have the right to rule and exercise power. But the present geographical lines of India are not in line with the Hindu proclamation of Akhand Bharat and Hindu claim to the truth; Brahmin rule over the rest.

Hindu believes along with Sri Lanka, Bhutan, Myanmar, and Nepal; Muslim Maldives, Bangladesh, Pakistan, Afghanistan, and Iran were all part of Akhand Bharat where Hindu gods and goddesses ruled Bharat. And in order to constitute the end of history and Hindu claim to truth, secularism must be replaced by religious nationalism. This is why the idea of a “Dharamyudh” (holy war) to reabsorb these former territories of Akhand Bharat has been prevailing among Hindus for long. As long as this project is unfinished, Brahmin rule over the rest and golden age of Akhand Bharat cannot be realized.

Read more: Qassem Soleimani’s assassination: Was it a plan to spread anarchy?

Only this explains why BJP aligned with RSS has taken away the special status of Kashmir, why the citizenship bill, why Indian Muslims along with Sikhs, Christians and Dalits are facing persecution, why India does not accept realities of its surrounding states, why India partnered with Aung San Suu Kyi against Myanmar Muslims, Why India partnered with godless Soviets to disintegrate East Pakistan, Why India partnered with the US to gain strong foothold in Afghanistan and what recently it has been doing with Pakistan and Iran’s Sistan-Baluchistan. Thus, the philosophical divergence between Muslim Iran and a Hindu India cannot result in a natural and perpetual partnership. And Soleimani’s assassination and expected Indian reaction have once again exposed this reality.

New Delhi’s reaction to the assassination of IRGC’s Quds Force Commander General Qassem Soleimani, came in a crafted and carefully worded statement. The mysterious press release reflected Delhi’s concern about the expected escalation in a region that is crucially important for India and its apparent balancing strategy between the US and Iran.

The press release reflected Soleimani as a “senior leader,” but used the term “killing” rather than “murder” or “assassination.” It expressed international rather than just Indian concern. It pointed out an “escalation in tension,” but without identifying an instigator or culprit. New Delhi advocated peace, but, did not especially mention the US in the context of Soleimani assassination.

In Gulf region alone, there are around 8 million Hindus; and in case of any further escalation between Iran and US, India will not hesitate to betray Iran once again

India has made an intentional choice to avoid criticizing the United States. This is because, while it engages Iran through the diplomatic and economic domains to enhance its influence in the Afghan-Pak region, it also cannot deteriorate its true and more natural strategic alignment with the US; who is on the behest of Israel at war with last remaining potent Muslim states. And it is of no coincidence that India is the most strategic ally of Israel after the US and the largest buyer of Israeli weapons.

Even strategically, an Iranian threat analysis on the Indo-American-Israeli alliance in the greater Middle East does not allow them to trust New Delhi in a war scenario. However, in peace, economic integration on a level playing field must be encouraged for a “win-win” option for all. Ideologically and in the long run, Iran has more natural partners in the form of Afghanistan, Pakistan, Yemen, Oman, Saudi Arabia, and Iran. However, enigmatically, all of their Muslim neighborhoods are engaged by rival great power politics in the post 9/11 world order.

Hindu India did not hesitate to fetch the frames of deception from the US and cunningly portray Qassem Soleimani as a “terrorist”. In one of Times of India (TOI) articles, the editor reason; “why Suleimani’s killing is bigger than that of Osama and Al Baghdadi?” Has India forgotten the rule of comparison? Comparison is always “like with like” and one cannot compare the martyrdom of a war hero to terrorists.

Read more: Pakistan won’t be part of any war: Role during US-Iran tension?

Soleimani was most arguably the main instrumental person in eliminating US funded ISIS and Al Qaeda from Iraq and Syria. In another article, the ignoramus editor even went further in excitement and raises the question; “If Iranian general can be droned for terrorism, why not a Pakistani general?” So if Hindu India declared Soleimani as a terrorist, it means a Pakistani general can be droned too for his “terrorism”? When will sanity prevail in India?

In this article, the construction of the sentences and the language used is eye-opening for the Muslims. This is how they transform and manufacture hate and confusion among the masses to their long term strategic objectives. The editor, pointing to the statements made by US administration, about alleged Soleimani involvement in 911; also shrewdly reflected an unwanted and artificially created “Shia vs Sunni war paradigm” in the greater Middle East.

After presenting Soleimani as a terrorist, TOI says; “The 9/11 attack was carried out by Sunni extremists, who by most accounts had little or no connection to Shia-majority Iran, a hated regional rival.” It is great lessons for all the Muslims, that if they continue to allow other to exploit them on sectarian line, the remaining Muslim states will soon perish.

Iran is slowly learning the Indian methods of engagement in all domains. The first blow and exposition to the aforementioned analysis came when India on the behest of US abandoned multi-billion oil imports from Iran in May 2019. Iran cannot trust India in the long run. Even if we talk in the context of the international economy, Iran must know, India has shrewdly and equally diversified its multi-billion portfolio with the West, Europe, and Arab states.

In a war scenario, these multi-billion economic engagements have no value, India knows, it is the only state for Hindus and they must protect the interests of Hindus first. In the Gulf region alone, there are around 8 million Hindus; and in case of any further escalation between Iran and US, India will not hesitate to betray Iran once again.

Sabtain Ahmed Dar is pursuing his M Phil in International Relations from Department of Political Science, Punjab University. His area of study is Israeli geopolitics and he has written a thesis titled ‘The Clash of Islam and Zionism: The final clash before the End of History’. The views expressed in this article are the author’s own and do not necessarily reflect the editorial policy of Global Village Space.

The New Digital Battlefield: Information warfare in our pocketbook

Pakistan, India amongst top countries of the world in religious restrictions