Home South Asia Afghanistan How much does US pay for its allies defences? More importantly, Why?

Since the start of Donald Trump’s run for the US presidency in 2015, he has been critical of the amount of money US allies contribute to their own defense.

Now, the Trump administration is demanding that Japan and South Korea pay more for hosting U.S. troops stationed in those countries.

The media also reported that US military leadership in South Korea discussed the possibility of withdrawing up to 4,000 troops from South Korea if it does not increase its contributions. The Pentagon has since denied having such plans.

We have each studied overseas deployments of US military personnel for nearly a decade and have recently come together to research the costs and benefits of such deployments.

What’s in it for the US?

The U.S. currently has approximately 174,000 active-duty personnel deployed to overseas locations in approximately 140 countries. The Department of Defense Comptroller’s Office estimates the total cost of overseas bases and deployments at US$24.4 billion in fiscal year 2020. These figures generally exclude the costs of ongoing combat operations.

For example, the weaker country may sacrifice control over their foreign policy and give the major power access to territory or airspace it otherwise would not have. Deployments in Japan and Korea gave the US influence in Southeast and East Asian regional matters during the Cold War.

Additionally, U.S. military personnel have served as the forefront of U.S. public diplomacy over the past 70 years through their routine jobs and day-to-day interactions with locals. The U.S. has been particularly effective at building “soft power,” meaning that people in other countries support the US because of the affinity they feel toward Americans and American culture.

Public opinion toward US military presence

Researchers conducted a survey in 14 countries with a history of large U.S. military deployments, asking residents how they felt about the military presence. 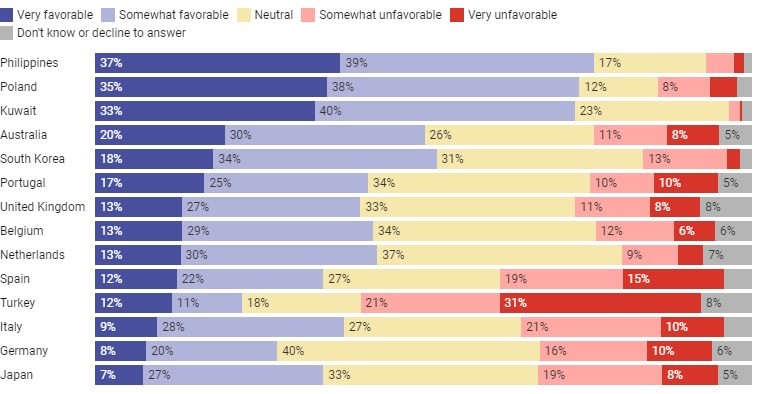 How long has the US had bases in Japan and South Korea?

Since the end of World War II in 1945 and the Korean War in 1953, the U.S. has maintained several military bases and tens of thousands of military personnel within both countries.

After Japan regained its sovereignty in 1951, the United States and Japan signed a treaty calling for mutual defense and an agreement that allowed for the U.S. to operate and maintain military bases in Japan. Either country has the option, with one year’s notice, to end the treaty.

Currently, there are approximately 55,000 U.S. troops in Japan.

South Korea has hosted U.S. forces since the Korean War, when the United Nations Security Council authorized member nations to repel North Korea’s invasion of South Korea. After the 1953 armistice, the forces remained to provide continued security to South Korea and to deter hostilities from North Korea.

Read more: North Korea cosying up to Trump in an attempt to get concessions

There are currently approximately 26,500 U.S. troops in South Korea.

The number of active-duty U.S. military deployed in a given country can fluctuate over time, as numbers from these five host countries show.

How much do Japan and South Korea normally contribute?

The United States has negotiated agreements with both Japan and South Korea that lay out the details of the cost-sharing arrangements with each country.

The specific amounts contributed, as well as the activities that each state covers, vary by country and over time. However, the contributions of U.S. allies typically are substantial.

For example, in 2019, the U.S. and South Korea negotiated an agreement calling for South Korea to contribute approximately $893 million.

By comparison, the Department of Defense currently estimates the total cost of maintaining the U.S. presence in South Korea and Japan at $4.5 billion and $5.7 billion, respectively.

Accordingly, both countries’ contributions amount to a substantial percentage of these total price tags.

The US presence has led to protest movements on the Japanese island of Okinawa, around the Ramstein Air Base in Germany, and in South Korea

Importantly, these figures provide only a rough picture of the financial relationship between the host country and the U.S. related to defense. For example, the figures for Japan do not reflect other transfers, like Japanese purchases of U.S. weapons systems, free rent and tax waivers, and other expenditures taken on by the Japanese government.

In fiscal year 2020, the U.S. is spending billions in current U.S. dollars to fund deployments of troops abroad.

How do people in other countries view the presence of U.S military?

In 2018, we conducted a survey in 14 countries, including Japan and South Korea, with approximately 1,000 respondents in each. These countries have traditionally hosted large U.S. military deployments.

We found that people in the host country generally feel positively or have neutral attitudes toward the U.S. personnel stationed in their country. People who have had direct contact with members of the U.S. military, or whose families and friends have interacted with the military, are more likely to report favorable views of U.S. personnel.

In addition, between 10% and 25% report receiving financial benefits from the U.S. military presence. This can include having U.S. servicemembers patronize their businesses or being employed by the U.S. military.

Our personal interviews with people in troop-hosting countries confirm these findings. For example, when we asked a member of the local Parish Council in the village of Lakenheath, England, how locals interact with the U.S. military, he told us, “When they see that [U.S. military personnel] are just as human as you are, people like [the U.S. military] more.”

Is the US military helpful?

Researchers conducted a survey in 14 countries with a history of large U.S. military deployments, asking residents whether the military presence was helpful and made them safer from foreign threats.

Opinions are not uniform. There are certainly ethical, social, environmental and economic considerations to hosting large U.S. deployments, and these costs have led to dissatisfaction and opposition in multiple countries.

The U.S. presence has led to protest movements on the Japanese island of Okinawa, around the Ramstein Air Base in Germany, and in South Korea.

The more the U.S. demands host nations pay for the U.S. presence, the less support local politicians may have to maintain the arrangement.

The discussion of whether U.S. allies contribute enough to their own defense is as old as many of the deployments themselves.

However, there are two components that make the Trump demands novel.

First, negotiations with South Korea previously occurred every four to five years. The Trump administration changed this last year to every year for South Korea. These negotiations are complicated and could make annual negotiations both time-consuming and turbulent.

Read more: South Korea to broker a deal between US and North Korea

Second, reports suggest that Trump’s new demands are not based on any clear U.S. military need. This leads us to the question of how Trump arrived at the new sum being sought from South Korea.

Polling shows that while Americans are increasingly skeptical of the U.S. intervention into Afghanistan and Iraq, Americans do support the United States’ current engagement in the world and its commitments to allies.

Amid Coronavirus, How would you train for Olympics? Ask Chinese Team

Why Trump is Not Signing any Trade Deal with India

February 21, 2020
Dozens of protesters in a Ukrainian town have attacked buses carrying evacuees from coronavirus-hit China. The evacuees were brought to the health spa in...

Did Prime Minster Imran Khan give NRO-like concession to his ‘friends’?

“No one can give an ultimatum to Turkey”: Turkish FO