How to get a people’s constitution for peace in Syria? 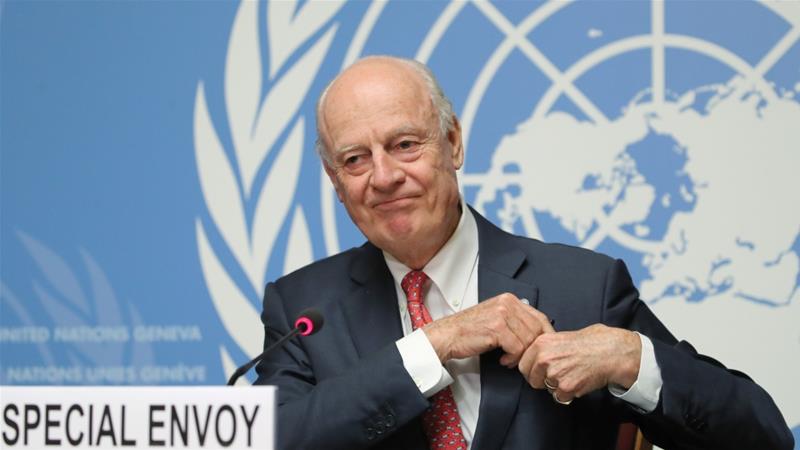 “Syrian authorities are ready to discuss the new constitution of the country but need to know which opposition structures are ready to raise this issue at the upcoming talks in Geneva,” – Bashar Assad said in an interview with Russian media on March 20.

The President of Syria added that a special constitutional commission on the research of a new constitution will be set up in the country’s parliament for this purpose in the near future.

It should be recalled that earlier the Russian side proposed the idea of creating the constitutional commission for developing the new constitution. Discussion of this issue will begin at the Geneva V conference, scheduled on March 23.

It is assumed that the parties planned to discuss the timetable of developing a new basic law for the country, the election process, and fighting terrorism in addition to the debates on the constitutional commission.

According to a member of the High Negotiations Committee (HNC), Bassma Kodmani, the Committee also shouts support for the discussion of the draft interim constitution of the country on the sidelines of the negotiations in Geneva.

The need to develop an interim constitution in the recent circumstances is, in principle, becoming obsolete.

The representative of the HNC, however, clarified that the Committee does not have sufficient legitimacy to draft a permanent constitution, but would like to present its own vision on the constitution in general, on the political transition, the government institution, the army, security issues, and the reconstruction of the country at the round of the negotiations on Syria.

It is impossible to give a clear-cut answer when asked whether Syria needs a temporary constitution (constitutional declaration) which is proposed by the HNC or not. First of all, it is necessary to create a constitutional commission, which will consider the proposals of the sides in the future both for the temporary and for the permanent constitution of Syria. After that, a legitimate parliament will be assembled and a referendum will be held where the Syrian people will approve the constitution.

The need to develop an interim constitution in such circumstances is, in principle, becoming obsolete because it makes no sense to organize the same activities twice.

So, what hinders the start of a full-fledged discussion on the new Syrian constitution?

Although such a step will undoubtedly lead to qualitative changes in the inter-Syrian negotiations, the Geneva platform still does not allow to gain progress on this crucial issue, the solution of which is vitally important for the transition to a political settlement of the Syrian conflict.

The discussion of the draft constitution brings the Syrian children closer to peace, encourages people to think about a beautiful future and moves them away from the war.

Unlike Geneva, the field commanders represent the real opposition in Astana. Armed groups now operating in Syria remain in touch with a certain part of the Syrian population, which helps them to realize the danger of an endless prolongation of the hostilities and the need to move further, to peace negotiations. Thanks to Astana the ceasefire agreement was reached.

Read more: What would a US-imposed constitution on Syria look like?

Some groups of the political opposition in Geneva, in turn, are trying to pursue its own narrow goals because of their own political motives. This explains the unwillingness of the opposition delegation to join the discussion of the draft constitution of Syria. Since the opposition has so far been able to delay the peace process, it intends to apply the same tactics to the new Syrian constitution.

Obviously, such opposition behavior is beneficial. First, to its representatives who will continue to organize endless conferences in world capitals, depriving the Syrian people of a chance to end the war, and second, to foreign sponsors of the very opposition.

After all, the discussion of the draft constitution brings the Syrian children closer to peace, encourages people to think about a beautiful future and moves them away from the war.

There can be no success until a unified delegation is established from among all opposition groups at the talks with united claims. Besides how can you start something concrete if you don’t have a partner (if the representatives of the opposition ignore the talks and don’t want to be a part of them)?

And there can be no success until the West and Gulf States stop their interference. The U.S. ‘assistance’ is worth noting especially. Even de Mistura perceived the U.S. influence in hindering all the latest ceasefire agreements. He confirmed recently that all the success efforts to boost the negotiation process had been made only by Russia and Turkey.

Sophie Mangal is a freelance writer and a member of the Inside Syria Media Center. After attending the University of North Carolina at Chapel Hill as a media and journalism major, Mangal monitored the refugee crisis in Europe, drawing parallels between the Syrian conflict and the Balkan problem, and has visited Syria on several occasions.

Has coronavirus brought about the end of Indian cinema?