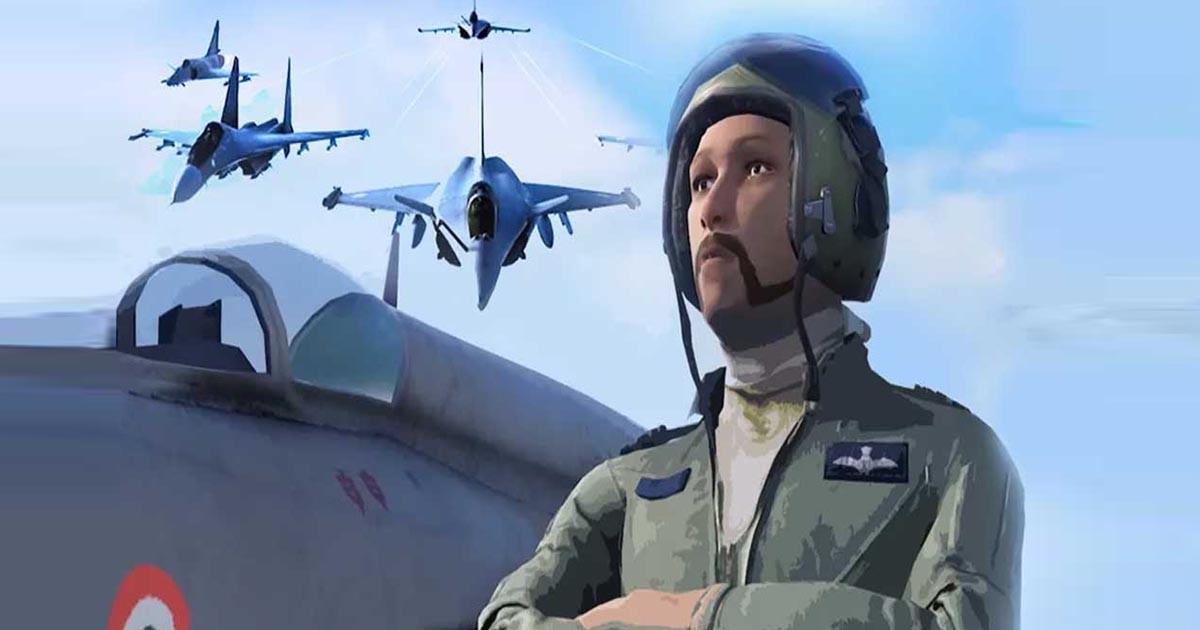 Indian Air Force launched an air combat game which features a lookalike of pilot Abhinandan Varthaman, on Wednesday. The character in the game sports a mudslinger mustache similar to that of Abhinandan, who features at the beginning of the single-player game, released by Indian Air Force.

Chief of Air Staff BS Dhanoa revealed the 3D mobile application in a ceremony. The IAF had released the trailer of the mobile game on July 20th and is titled ‘Indian Air Force: Cut Above’. The trailer of the game, since its release, has garnered over 43,600 views, while the Twitter post has been liked by more than 7,000 users and re-tweeted nearly 2,000 times.

“Launch of IAF MobileGame: Android / iOS version of IAF developed Mobile Game (Single Player) will be launched on Jul 31, 2019. Download on your mobile phones and cherish the thrilling flying experience. The multiplayer version will soon follow,” IAF had tweeted.

The game is launched to woo the youth and allure them to join the Indian Air Force, part of the strategy to shore up its depleting manpower.

Multiplayer feature is to be released in October 2019.

And here is the trailer of the game – available for Android and IOS. pic.twitter.com/taI74lz762

The teaser gave an overview of the single-player game and showed various jets targeting different on-land structures in aerial combat.

“I am an air warrior, proud, dependable and fearless. In every act and deed, I put the honor and security of my motherland, first,” says the voice over in the game.

“I fly deep into enemy territory and strike fear in the hearts of my enemies,” it added.

In the beginning, the player is taught the handling of an aircraft through a tutorial mission after which the player earns the wings. After this, 10 missions will follow in which the player will experience air power of the IAF in the form of its response, reach, precision, and flexibility, including support to other arms of the Indian Military.

The game is launched to woo the youth and allure them to join the Indian Air Force, part of the strategy to shore up its depleting manpower.

Interestingly, there has been a surge in the gaming industry of India, attributing it to the availability of low-cost data prices and increased internet penetration. The number of Indians playing online games has jumped from 20 million in 2010 to 250 million by 2018, claims the KPMG and Google report. India’s gaming industry is likely to expand further with revenues peaking at nearly $340 million, by 2021, predicts a Frost and Sullivan estimate.

Abhinandan Varthaman, the captured Indian Air Force Wing Commander was hailed as a ‘national hero’ in India upon his return from captivity in Pakistan. Pakistan military held him captive after his aircraft MiG 21 Basin was shot down by Pakistan Air Force upon violating the Line of Control in Kashmir, in February 2019.

Abhinandan survived the crash, however, landed on the Pakistani side of the LOC. After remaining in captivity for two days, Abhinandan was released as a ‘goodwill gesture’ and was handed over to India via Wagah border amid tight security.

The border tensions between India and Pakistan escalated post-Pulwama attack, a deadly suicide attack that claimed the lives of 40 Indian troops in Jammu and Kashmir. Indian Air Force violated the airspace of Pakistan and claimed to conduct a surgical strike against the alleged terrorist camps in Balakot, Pakistan, on the night of 26th February. Pakistan Air Force jet swiftly chased off Indian Air Force jets within seconds of intrusion. PAF foiled the second attempt of airspace violation by IAF on Wednesday 27th that lead to the capture of Wing Commander Abhinandan Varthaman.

Meanwhile, Pakistani social media users are mocking the Indian Air Force for celebrating their captured pilot. Poking fun at the release of the game, Pakistani users asked why a cup of tea was not featured in the game and why there has not been a game on Indian navy commander Kulbushan Jadhav, who is also in the captivity of Pakistan on charges of conducting terrorist activities in Pakistan.

Of course it's single player and very easy to play.
Mission 1: Shoot down your own helicopter.

You didn't show the cup of tea by the way, 😭

does it include the part where he is beaten by local people?