Imran and Boris are same when it comes to women: Reham Khan 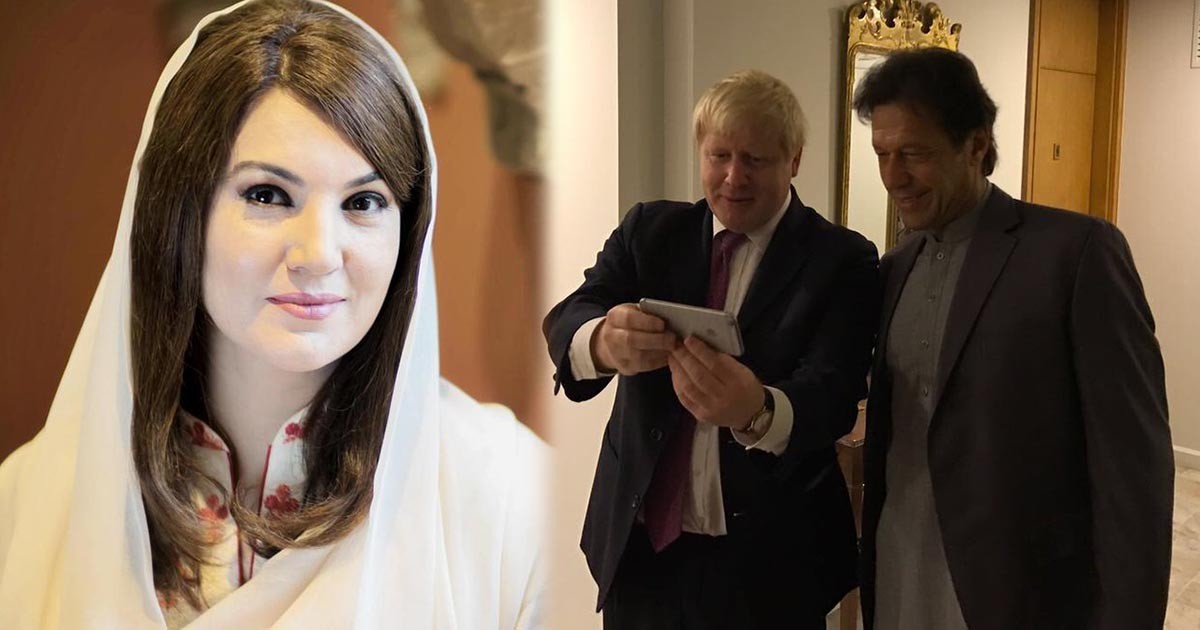 Reham Khan, the second and former wife of Prime Minister Imran Khan, has ridiculed him again in her recent article for an international outlet. Reham Khan has drawn a comparison of personalities between Britain’s new Prime Minister, Boris Johnson, and PM Imran Khan.

Reham Khan has held a scornful attitude towards Imran Khan ever since the dissolution of their 10-month union in 2017. Reham is disillusioned with the selection of Boris Johnson as the UK’s Prime Minister, replacing Theresa May.

No surprises that both Imran and Boris went to Oxford and constitute the small group of elites globally who go to the same playgrounds as children and end up on the same partying circuit as adults.

Earlier, US President Donald Trump and PM Khan were compared having similar dispositions. The speculations about them turned right, especially after PM Khan’s recent successful visit to the USA.

She wrote how she first discarded the idea of writing an article comparing Imran Khan and Prime Minister Boris Johnson since she believed that PM Khan was ‘more like Trump than Johnson’.

‘But when news broke recently about Johnson’s neighbors’ calling the police over a loud domestic altercation, my ears perked up. That evening, I sat down to browse about Boris.’

“Tabloids screamed out: “Philandering MP, embarked on at least five extra-marital flings and got at least two of his mistresses pregnant.” ‘Imagine my horror as I discovered more shocking similarities between him and Imran Khan,’ wrote Reham.

Read more: Who designed Imran Khan’s clothes for US visit?

She further wrote that Johnson’s discord with his young girlfriend was immediately followed by a leaked picture of the couple sitting on garden furniture. Reham recalled, Imran Khan too shared a picture of her playing cricket with children in the Bani Gala residence, following the speculation of their divorces beamed on news channels.

She further stated that both Imran Khan and Boris Johson are Oxford University graduates, and both have a confused sense of geography as both called Africa a ‘country’.

‘No surprises that both Imran and Boris went to Oxford and constitute the small group of elites globally who go to the same playgrounds as children and end up on the same partying circuit as adults,’ wrote Reham Khan.

Reham Khan also talked about his alleged drug addictions, which she leveled against PM Khan in her biography.

PM Imran Khan took Bushra Maneka as his third wife before ascending to the premiership, whereas Borish Johnson has become the first UK premier to have an unmarried partner, first time in UK’s history.

‘References to Imran Khan’s cocaine addiction are a commonplace in TV talk shows and memes in Pakistan. It is perhaps the worst kept secret in Pakistan, which I confirmed in my memoir too. Our new British PM flits between volunteering information himself on live TV and dodging direct questions, as per his mood,’ concluded Reham Khan.

Being a former wife, Reham Khan has a record of initiating spiteful campaigns against PM Khan, particularly around Khan’s crucial achievements in his political career.

She published her biography, leveling serious and malicious allegations against him before general elections last year. She attempted to tarnish the image of PM Khan in her interview to an Indian channel by playing the religion card, at a time when the world lauded PM Khan for his peace initiative of releasing captured Indian pilot, Abhinandan Varthaman, to de-escalate tensions between India and Pakistan.

Reham Khan, however, has missed a unique record that Boris Johnson holds and PM Khan lacked while swearing-in as the prime minister.

Prime Minister Imran Khan took Bushra Maneka as his third wife before ascending to the premiership, whereas Borish Johnson has become the first UK premier to have an unmarried partner, first time in UK’s history.

Give us Brexit detail or risk losing support, Tory moderates tell May