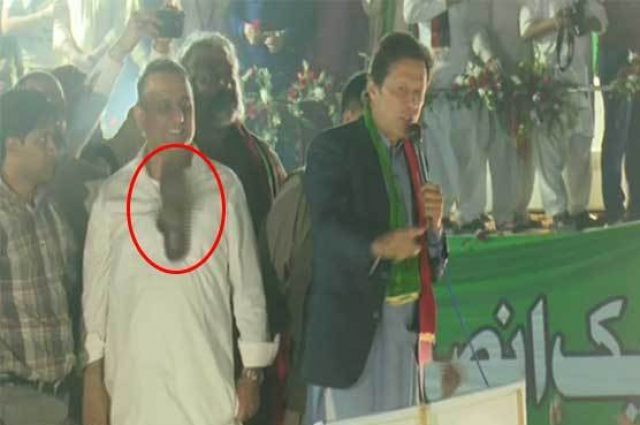 Pakistan Tehreek-e-Insaf (PTI) Chairman Imran Khan narrowly escaped another shoe attack while addressing a rally, on Tuesday evening in Gujarat.  A shoe which was apparently aimed at Imran Khan hit the party’s senior leader, Aleem Khan, on his chest who was standing right next to him.

According to the video footage, Khan was standing atop of makeshift stage with other party leaders and was nearly concluding his address, oblivious that a shoe was about to be hurled at him.

A staff member immediately came in front of Aleem Dar. Aleem Dar brushed his chest and smiled it off. The attacker was taken into custody and is yet to be identified.

This was the second such attempt to attack PTI leader within a span of two days. Earlier, in Faisalabad, Khan was met with a similar attack. The suspect was severely thrashed and handed over to police after he attempted to throw a shoe at Khan, while he was leaving in his vehicle after addressing the public gathering part of a membership campaign drive.

PTI Central Information Secretary (CIS) Fawad Chaudhry speaking to a private channel strongly condemned the incident and alleged that PML-N was instigating its workers to commit such crimes.

According to the witnesses, the attacker chanted slogans in favor of the Tehreek-i-Labbaik Ya Rasool Allah (TLP).

In his confessional video message, the attacker confessed that he was sent by the Punjab Law Minister Rana Sanaullah’s son in law to attack Khan.

These incidents are apparently a direct consequence of the similar incident, when ousted Prime Minister Nawaz Sharif suffered a humiliating incident, which left him shaken at Jamia Naeemia in Lahore.

On Sunday, Munawwar Sabir -a former student of Jamia Naeemia, hurled a shoe which hit the beleaguered leader on his shoulder, leaving him visibly shaken at the incident.

According to the witnesses, the attacker chanted slogans in favor of the Tehreek-i-Labbaik Ya Rasool Allah (TLP). According to the reports, the motive of the attack was revengeful for Pakistan Muslim League-Nawaz’s controvercial role in amending the the Khatam-e-Nabuwat [finality of Prophethood] clause in Election Reform Bill 2017.

Following the incident, Rana Sanaullah also strongly condemned the attack and urged the political parties to build a consensus and develop a strategy deal with these unpleasant activities.

Read more: Rather than dragging Rana Sanaullah from his mustache, Khan should sell…

The attack drew strong condemnation from all the mainstream political parties and civil society. Imran Khan condemned the shoe attack, and despite the fact that attacker confessed the motives behind attack and had links with the religious outfit, PML-N workers are adamant to believe that Khan had anything to do with the attacker. With elections around the corner, shoe attacks are grown into popular political trend.

What happens now for Jammu & Kashmir refugees in Pakistan?