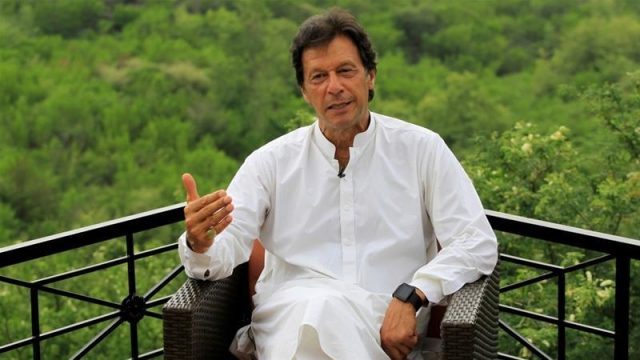 Imran Khan will not adorn a new Sherwani and is likely to follow his white dress code of Shalwar Kameez when he will take the oath in Naya Pakistan. The close sources have stated that even if he follows the tradition of Quaid-e-Azam, he will probably wear an old Sherwan for his oath-taking ceremony scheduled on Saturday, 18th August.

Living up to his claims of austerity Pakistan Tehreek-I-Insaf chief has decided to keep his dress code simple for the ceremony. As informed by the ‘Jalil Trailor and Drappers’  that they first received orders of stitching a new Sherwani for Imran Khan that was called off. Later on, they were asked to stitch just a new waistcoat for Imran Khan.

“We were first asked to stitch a sherwani for the PTI’s chief. However, later on the order for sherwani was replaced with that of a waistcoat but this too was cancelled as the premier in waiting wants austerity to prevail at all levels starting from him as a person,” Jalil said.

The tailor shop has been providing service since last four decades. They have stitched ceremonial dresses for Ghulam Ishaq Khan to Pervez Musharraf. Former prime minister Nawaz Sharif reportedly got his new sherwani stitched from them for his oath-taking ceremony in 2013.

“General Zia used to get his sherwani tailored from our shop every year till his demise in a plane crash in 1988. Even after that period privileged class used to hire our services for ceremonial dresses especially sherwani and waistcoat,” said the owner of the shop.

Imran Khan has expressed his resolve to break the traditions of lavish expenditures by the legislators and public office holders on personal adornment. Wearing an old Sherwani at a high-profile event would be his first step in this direction.

Precviously, Imran Khan garnered massive media attention when he borrowed the waistcoat of a photographer for an official National Assembly photo. People praised Imran Khan for his humility. The photographer expressed his amazement over Imran Khan’s gesture.

No ‘change’ in Punjab: Is that why PML-Q stands by Usman Buzdar?

Where were the US-Canadian hostages before they were freed?