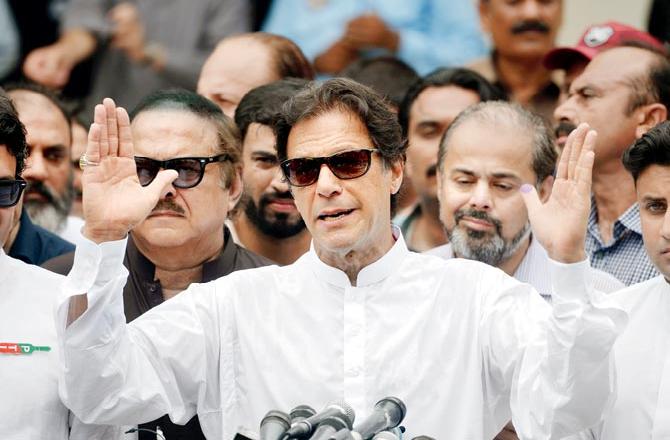 Islamabad has conveyed to India that it will release 30 Indian fishermen and prisoners on the eve of Imran Khan’s oath-taking, which is likely to take place on August 14, Pakistan’s Independence Day. According to latest reports from Pakistan, Khan’s oath-taking as prime minister has been deferred to August 14 from the earlier August 11.

On August 13, sources indicate that Pakistan will release the Indian prisoners, mostly fishermen, at the Wagah/Attari border. The timing of the proposed release of prisoners is being seen as another peace overture from across the border after Khan said in his victory speech that Pakistan would reciprocate with two steps to any single step which India might take for normalization of ties.

India had last year released 11 Pakistan prisoners after an ‘exchange of greetings’ between Modi and his then-counterpart Nawaz Sharif in Astana on the margins of the SCO summit.

PM Narendra Modi responded to Khan’s statement a few days later with a congratulatory phone call in which he spoke about the possibility of the two countries entering into a new era of relations. Pakistan currently has in its custody 53 civilian prisoners and 418 fishermen who are Indians or believed to be Indians. India had last month asked Pakistan to expedite the release of 9 Indian civilian prisoners and 229 Indian fishermen who have completed their sentences and whose nationality has been confirmed.

In the past too, both countries have used the release of fishermen and other civilian prisoners as a goodwill gesture to mark the significant occasion in ties. India had last year released 11 Pakistan prisoners after an ‘exchange of greetings’ between Modi and his then-counterpart Nawaz Sharif in Astana on the margins of the SCO summit. In 2014, just before his arrival in India for Modi’s swearing-in, Sharif had ordered the release of 151 Indian fishermen.

Read more: NAB summons Imran ahead of oath-taking on 7th August in KPK…

Both sides have been working since late last year to address humanitarian issues as suggested by foreign minister Sushma Swaraj to Pakistan high commissioner Sohail Mahmood in October 2017. India and Pakistan are working for the release and repatriation of prisoners over 70 years of age and also women in each other’s custody.

Pakistan later proposed that prisoners below the age of 18 and those between 60 and 70 were also released and repatriated. India is currently awaiting Pakistan’s approval for a visit by Indian doctors to Pakistani jails for examining mentally unsound prisoners. The Pakistani government in January handed over a list of 457 Indian prisoners held in the country to the Indian High Commission in Islamabad.

PM Narendra Modi responded to Khan’s statement a few days later with a congratulatory phone call in which he spoke about the possibility of the two countries entering into a new era of relations.

The Foreign Office in a press release said that a list of Pakistani prisoners was also given to the Pakistan High Commission in New Delhi. The FO said that the step is “consistent with the Consular Access Agreement between Pakistan and India, signed on 21 May 2008, under which both countries are required to exchange lists of prisoners in each other’s custody twice a year, on 1 January and 1 July, respectively.”

According to the press release, Pakistan released 146 fishermen on January 8. This came in addition to the 145 fishermen that the Pakistani authorities released on December 28. In March, Indian government officials told the Supreme Court that 307 Pakistani prisoners, including fishermen, are lodged in Indian jails and detention centers, and 56 of them have already completed their jail term but could not be repatriated as “setting them free would be a security risk”.

In an affidavit, the home ministry provided details of the prisoners and refuted the allegation that it was not taking steps to send them back to Pakistan. The Government said it had been holding talks with the Pakistani Government from time-to-time, in order to pave the way for their repatriation. The Government, however, said all those who have completed their jail term could not be set free as it would be a threat to national security.

In June, a Pakistani man, who mistakenly crossed into India in 2007 and was caught by the Border Security Force (BSF), returned home after 11 years in detention. Muhammad Yaseen, 45, received a warm welcome upon his arrival at his village of Chahal in Punjab province on Saturday.

Read more: Khan may take oath on 14th August as MQM completes the…

Yaseen spoke about the “miserable condition”, he and other prisoners, especially Pakistanis, faced in Indian jails, according to a report. “I thank Allah Almighty that I have reached back home safely after spending 11 years of my life in an Indian jail,” he said.

Black Out: Faiz’s daughter invited and turned away by India