In Iraq’s Mosul, women desperate for news of ‘disappeared’ 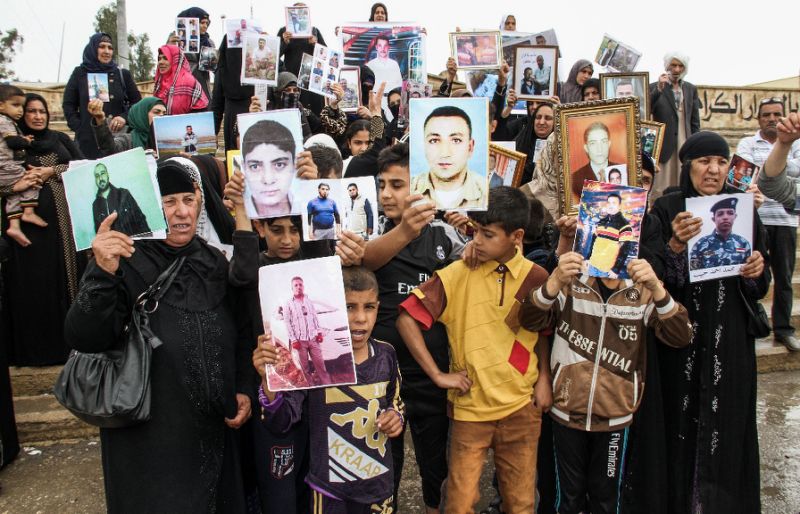 Every Friday since Mosul was prised from the Islamic State group’s clutches last July, women gather in the Iraqi city’s Al-Minassa Square, desperate to learn the fate of husbands and sons. Dressed in black, with children in tow and brandishing photos, some fear their men have fallen victim to a cruel double jeopardy.

They had been imprisoned by or forced to work for IS, only for Iraqi forces to suspect them of collaborating voluntarily with the jihadists  — and lock them up. That is what some mothers and wives fear, faced with official silence. “Instead of being free today and compensated, they are being kept behind bars,” said 80-year-old Umm Abdullah, tormented by her son’s disappearance.

She fears her child will be falsely accused, 12 months since Iraqi forces expelled IS. When the jihadists seized Mosul in 2014 after a lightning offensive, men working in the security forces or in other state jobs who did not run away were left with nowhere to hide.

A separate list of missing Yazidis comprises 3,111 names, although the number fluctuates as members of the minority re-emerge alive after having years enslaved by IS.

Seen as representatives of an “apostate” state, many of them were forced to publicly repent and swear allegiance to IS. The women of Al-Minassa resemble the Mothers of the ‘Plaza de Mayo’ who relentlessly pursued justice for sons who vanished under Argentina’s 1976 to 1983 junta.

Read more: Nearly a year since fall of Iraq’s Mosul, hunt for bodies…

Sure they are Detained

Standing on the steps of the square, 38-year-old housewife Shaima believes she knows what happened to her policeman husband. Shaima, 38, said jihadists raided the family home and abducted her husband on November 25, 2016, a fate that befell many of his colleagues. When Iraqi troops battled to retake the city, “he was used with other prisoners as human shields”, she said.

Soldiers then arrested him “because he didn’t have identity papers and had grown a thick beard during his detention by IS”, said the mother of six, fighting back tears. When outgoing prime minister Haider al-Abadi visited Mosul in March, the women tried to approach him and ask about their men, but bodyguards pushed them back.

Security officials told AFP the families of all those arrested in Mosul have been informed. But Shaima said she has had no official word and resorted to other channels. She had “received information… he is detained” at Baghdad’s Al-Muthana airport, along with suspected terrorists.

Abu Luay, a 56-year-old unemployed man, spends his time looking for his two sons, snatched from their home by IS fighters on October 4, 2016. The sons, Luay and Qusay, have never reappeared. After several months of investigating, “we’re sure they’re detained by security forces, but we don’t know why”, Abu Luay said.

Read more: Will the fall of Mosul make Iraq safer?

Not all those who had been held by IS survived the brutality of its rule. “Many of the disappeared were executed by IS and their bodies thrown in the ‘Khafsa’,” said human rights activist Sami Faisal, referring to an area that translates from Arabic as the “abyss”.

The site, a sinkhole that folklore says was left by a meteor, could be one of the biggest mass graves in Iraq, as it was an IS execution ground. Collating testimony from families, Faisal said he has compiled 1,820 names of men and women who have disappeared.

38, said jihadists raided the family home and abducted her husband on November 25, 2016, a fate that befell many of his colleagues. When Iraqi troops battled to retake the city, “he was used with other prisoners as human shields”, she said.

Many on the list were soldiers, civil servants, journalists and activists from Mosul and the surrounding area. A separate list of missing Yazidis comprises 3,111 names, although the number fluctuates as members of the minority re-emerge alive after having years enslaved by IS.

Deciding when a person can be declared dead is an issue which the authorities are tackling. The Iraqi judiciary has ruled “two years without news of a person who has disappeared in a context of terrorism sufficient to officially pronounce their death”.

Mosul’s mayor, Zoheir al-Araji, said the justice ministry registers complaints by relatives of the disappeared.  The cases go “to the government and security authorities to investigate their fate”, he said. “But so far without results.” Bereft of her two sons, Umm Luay tries to take some solace from photos and memories.