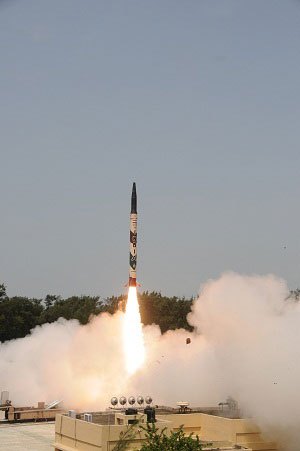 India successfully flight tested its nuclear-capable Agni-5 missile on Sunday morning, according to the office of the country’s defense minister. This is the latest addition in a series of hard militarization under the current Hindutva government

“Long range ballistic missile Agni 5 was successfully flight tested at 0945 hrs today from Dr APJ Abdul Kalam Island (Wheeler Island),” a tweet from the office read. The island is located in the Bay of Bengal. The Press Trust of India (PTI) reports that the missile is ‘nuclear-capable’ and has a strike range of approximately 3,107 miles.

The surface-to-surface missile was launched with the help of a mobile launcher from launch pad-4 of the Integrated Test Range (ITR) at Dr Abdul Kalam Island at 9.48 am, defense sources confirmed.

This was the sixth trial of the state-of-the-art Agni-5. The missile covered its full distance during the trial, which was a ‘complete success’ according to Indian sources.

Currently, India has Agni-I missiles with a range of about 430 miles along with Agni-II, Agni-III, Agni-IV – ranging between 1,550 and 2,175 miles – and Agni-V with a range of 3,100 miles. Agni-VI, with a range of up to 6,200 miles and capability of being launched from a submarine, is currently under development.

India has been developing its nuclear and missile systems in recent years amid increasing strategic competition with China.

Last year, tension flared between the two neighbors over a disputed section of their border high in the Himalayas. A press release from the Ministry of Defense included photos of Sunday’s launch.

“All the Radars, Electro Optical Tracking Stations and Telemetry Stations tracked the vehicle all through the course of the trajectory,” it said. “All the mission objectives have been achieved,” The press release further stated.

Unlike other missiles of the series, Agni-5 is the most advanced with new technologies in terms of navigation and guidance as well as warhead and engine, said a Defense Research and Development Organization (DRDO) official.

The test comes weeks after the anniversary of the Pokhran Nuclear tests by India, which jump started the nuclearization of the subcontinent and prompted the Indian neighbor, Pakistan to go nuclear.

Read more: A glimpse of the past: Was Pakistan ready to respond to India’s overt nuclearization?

Further to this, On Sunday, two paramilitary soldiers were killed and eight civilians were wounded when Pakistani soldiers attacked dozens of forward posts along the highly militarized frontier in disputed Kashmir, Indian officials said.

The fighting comes barely a week after the two nuclear-armed rivals agreed to stop trading fire along the volatile frontier and uphold a cease-fire, dating back 15 years. The two sides, on Tuesday, agreed to defuse tensions in Kashmir and use existing mechanisms of hotline contacts and border meetings at local commanders’ level to resolve the issues.

Pakistan did not immediately comment. Tensions have soared in recent months, as both sides have shelled border posts and villages. Each side has accused the other of starting the hostilities in violation of the 2003 accord.

The soldiers from the two nations have engaged in fierce border skirmishes along the rugged and mountainous Line of Control, as well as a lower-altitude 200-kilometer (125-mile) boundary separating the Indian-controlled Kashmir and the Pakistani province of Punjab – where most of the latest fighting occurred.

India and Pakistan have a long history of bitter relations over Kashmir. Since then, they have fought two of their three wars over their competing claims to the region.

The fighting has become a predictable cycle of violence as the region convulses with decades-old animosities between India and Pakistan over Kashmir, where local people demand that the territory be united either under Pakistani rule or as an independent country.

India accuses Pakistan of arming and training anti-India rebels and further supporting them by providing gunfire as cover for incursions into the Indian side. Pakistan denies this, saying it offers only moral and diplomatic support to the militants and to Kashmiris who oppose Indian rule.

Rebels have been fighting Indian rule since 1989. Nearly 70,000 people have been killed in the uprising and the ensuing Indian military crackdown. With their history, If and how Pakistan reacts to India’s nuclear flight test remains to be seen.

Azam, Malik star as Pakistan go one up in the Independence Cup