India, not Pakistan, is US strategic ally: Pakistan Foreign Minister 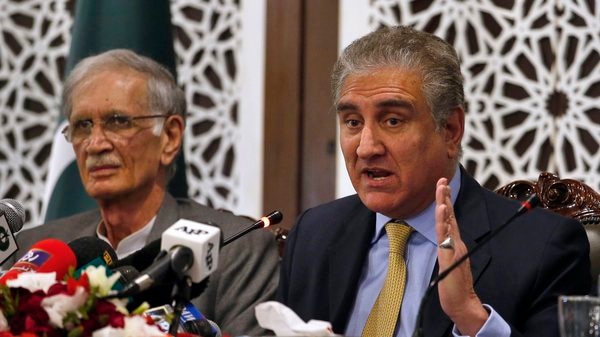 Qureshi was giving an exclusive interview on newly launched GNN TV channel, on Saturday, in the wake of BLA attack on Chinese Consulate in Karachi on Friday, Nov 23. During the discussion, he said that “we understand that now things have advanced too far between India and the US, and India is now US’s real strategic partner and not us, though they do say so, in words we know the reality”

Foreign Minister, Qureshi, asserted that his government has improved relations with the UAE which were literally frozen for the past five years and Pakistan is also about to secure a relief package from UAE.

Discussion touched upon this because TV Anchor reminded him that he and other Pakistani leaders keep on arguing that Pakistan provided huge support to the US in its war effort in Afghanistan and that without Pakistan’s strategic support in the form of air and naval corridors and land routes, US would have found it difficult to sustain its war efforts in a difficult Afghanistan but US officials and decision makers – like President Trump recently – keep on rubbishing Pakistan. Qureshi reacted by saying that we must not dismiss Pentagon’s statement a day after Trump’s tweets and that there are reasons for the US’s negative position o Pakistan.

He explained that the United State’s priorities have changed. Asked if it was necessary for Pakistani Prime Minister to respond to Trump’s tweets by three of his own tweets; he argued that it was important for his government to set the record straight and also to send the message that we know what’s happening. “We understand that United States’s priorities have changed and that their relations with India have advanced to the extent that it is now India, and not Pakistan, that is United States’s strategic partner”

US Priorities have Changed in the Region

TV anchor, Moeed Pirzada, reminded him of October 2011, when Qureshi and Hillary Clinton, the then Secretary of State, had tossed their heads together, during a press conference at State Department, in Washington, affirming the strategic relationship between both countries. Qureshi admitted that such a time existed but responding to the question, “What happened?” he added that relations have moved apart since then and mostly because United State’s priorities in the region have changed. United State’s is far too determined in its policy to “contain China” and Pakistan is China’s main ally in the region.

“United States is a huge reality, a technological, economic and military power” and US-Pakistan relationship has been and still is, very beneficial to the US.

Earlier he admitted that attack on Chinese Consulate in Karachi is “from neighbours”. Before this in his press talk and other TV interaction he kept on referring towards the “powers that are against prosperity of Pakistan” but when he was repeatedly confronted by the TV Anchor, Moeed Pirzada, that he and his Prime Minister are continuously referring to the “powers” but are not explaining who these powers are; he pointed towards the neighbourhood and in the discussion that followed he referred more openly towards India. He argued that India feels cornered in Kashmir and wants to divert attention from the situation there.

Deadlock with the IMF: Economic or Political?

Responding to questions on deadlock with the IMF, he asserted that talks are continuing, however, his government is clear that if IMF’s priorities are purely economic – like reducing Pakistan’s fiscal deficit – then Pakistan and IMF are at the same page and can work together. “However we will be worried if IMF has political priorities – other than economic – and they insist on imposing a certain political agenda over Pakistan.” In that case, its government’s responsibility to protect the livelihoods of poor Pakistanis and such a situation may compel the government to seek what he referred to as a “homegrown solution”

He asserted that China understands Pakistan’s economic challenges and its leadership is ready to help out Pakistan. Anchor questioned him that why he and his Prime Minister are not explaining the agreement they have obtained from China during the November visit, he responded by claiming that Chinese are all-weather friends and if they insist on Pakistani leadership to stay quiet or remain patient then it’s important to follow their advice.

Foreign Minister, Qureshi, asserted that his government has improved relations with the UAE which were literally frozen for the past five years and Pakistan is also about to secure a relief package from UAE. When he was asked about the details, he explained that ‘we need to wait for few days’ but added that he is “not merely hopeful, but he knows and is confident” and that soon everyone will know about it. Its generally believed that UAE will offer a generous “Deferred Oil Payment facility” to Pakistan.