Malaysian Prime Minister Dr. Mahathir Mohammad responded to the criticism garnered by his remarks in support of Indian occupied Kashmir from India, maintaining that Malaysia will not side with any party but demands a peaceful resolution. 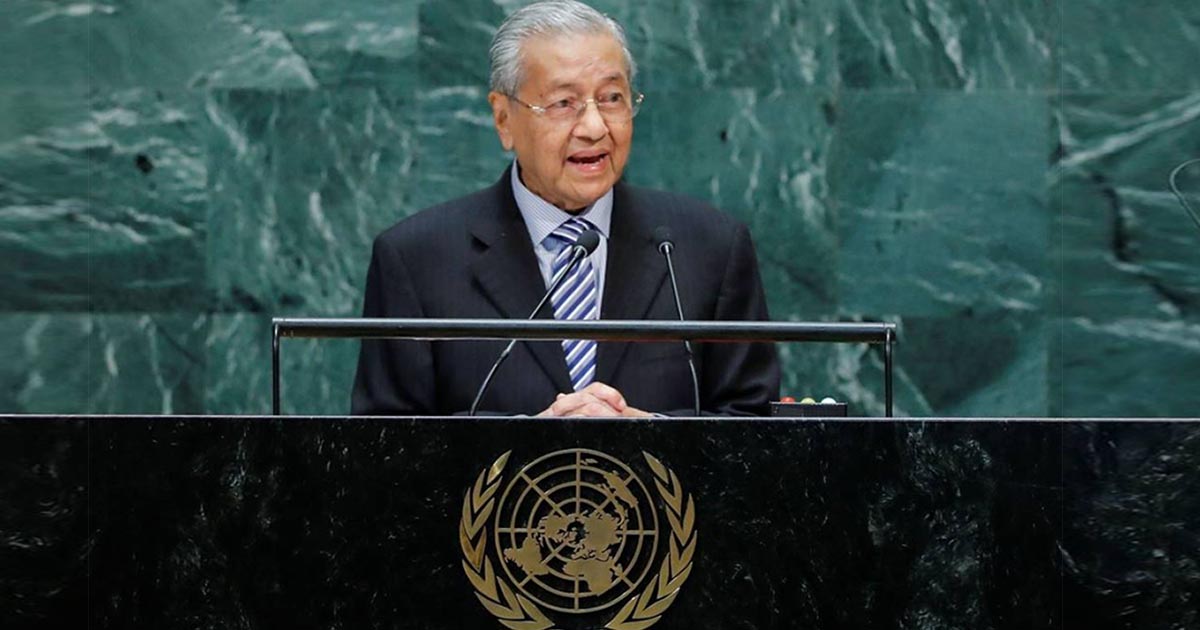 The Malaysian Prime Minister Dr. Mahathir Mohammad on Tuesday defended his remarks in support of the Kashmiri struggle for freedom from a brutal Indian occupation, which he made during his address at the 74th session of the United Nations General Assembly (UNGA), held last month.

Addressing the Malaysian press, Dr. Mahathir said that that his comments about the ongoing conflict in occupied Jammu and Kashmir were “simply an extension of his private exchange” with the Indian Prime Minister Narendra Modi when the two leaders had met in Vladivostok, Russia.

The Malaysian Prime Minister said that his country will not be taking any sides in the ongoing conflict. He said, as cited by the Malay Mail, “We must know how to manage this problem. If we do not criticize, and (by the way), our criticism does not side with anyone.”

Dr. Mahathir added, “Just demanding that both parties negotiate and not use violence. That has always been our policy. Do not use violence and instead, negotiate, or go for arbitration or go to the court of law.”

There may be reasons for this action but it is still wrong. The problem must be solved by peaceful means. India should work with Pakistan to resolve this problem. Ignoring the UN would lead to other forms of disregard for the UN and the Rule of Law. pic.twitter.com/QOQtIkPTC1— Dr Mahathir Mohamad (@chedetofficial) September 28, 2019

The Malaysian Prime Minister observed that he had raised the same issue with Indian Prime Minister Narendra Modi during their meeting in Russia, and his UNGA speech also stressed upon the need to settle disputes and conflicts amongst nations through dialogue.

He said, “This is what I raised to Modi when I met him at Vladivostok, and my speech is an extension of our stand, that we do not want to see violence erupt. Instead, any dispute, conflict among nations must be settled via negotiation, arbitration or court of law.”

Dr. Mahathir accepted that his remarks with regard to the ongoing humanitarian crisis in Indian occupied Kashmir could garner negative consequences for Malaysian-Indian relations.

Responding to a question on the Malaysia-India trade relations, the Malaysian Prime Minister observed that there had been no negative impact on the trade volumes between the two countries.

Given the principled stance exhibited by the Malaysian Prime Minister and the Turkish President, even Indian analysts agree that Pakistan has succeeded in internationalizing the issue of occupied Kashmir

Responding to a question of whether New Delhi had expressed any displeasure with his uncompromising stance on occupied Kashmir, he said, “I have already spoken to Modi. If there are any unsatisfactory feelings within Modi, he can contact me, but to date, no calls.”

Twitter users from India have responded to Dr. Mahathir’s principled stance on the ongoing humanitarian crisis in occupied Kashmir with a #BoycottMalaysia movement that is trending on the social media platform.

The helplessness of the world in stopping atrocities inflicted on the Rohingyas in Myanmar had reduced the regard for the resolution of the UN. Now, despite UN resolution on Jammu and Kashmir, the country has been invaded and occupied.— Dr Mahathir Mohamad (@chedetofficial) September 28, 2019

The hashtag was generated hours after Dr. Mahathir’s powerful address at the 74th UNGA session, where he stressed the need to resolve the longstanding dispute of occupied Jammu and Kashmir. The users of this hashtag have started a hate campaign against Dr. Mahathir and Malaysia, urging Indian tourists against traveling to Malaysia, and criticizing the Malaysian government of interfering in India’s “internal affairs”.

Addressing the floor of the UNGA, Dr. Mahathir had urged New Delhi to comply with international norms and UNSC resolutions on the question of allowing Kashmiris the right to self-determination. The Malaysian Prime Minister said, “The problem must be solved by peaceful means. India should work with Pakistan to resolve this problem. Ignoring the UN would lead to other forms of disregard for the UN and the Rule of Law.”

Given the principled stance exhibited by the Malaysian Prime Minister and the Turkish President Recep Tayyip Erdogan, even Indian analysts agree that Pakistan has succeeded in internationalizing the issue of occupied Kashmir.

Malaysia joined Turkey & China in raising the Kashmir issue at the United Nations General Assembly (UNGA), with its Prime Minister Mahathir Mohamad accusing India of "invading and occupying the country" of Jammu and Kashmir. Issue is internationalised now https://t.co/E1W9xqD1BR

Speaking to think tanks and journalists in the US, Dr. Mahathir had urged the international community to “respect” the wishes and the resolutions of the United Nations Security Council in order to preserve the sanctity of their own rights and ensure a peaceful world community.