Indian might have occupied Kashmir but it has miserably failed at controlling the passion that drives Kashmiris to fight for freedom. Indian forces fail to enter Kashmir's Gaza and residents say India will have to cross over their bodies to enter 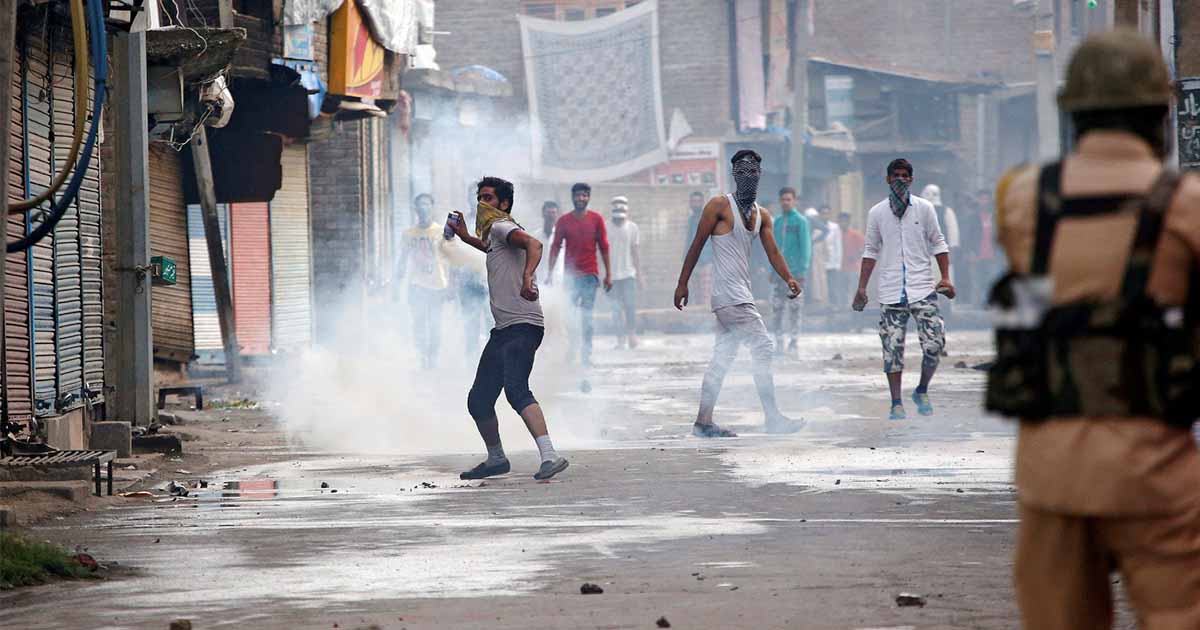 Young men sit beside a pile of rocks and a bonfire, protecting the only entrance to a besieged neighborhood they call “Kashmir’s Gaza” as a mosque loudspeaker broadcasts slogans of liberation.

In an act of defiance against New Delhi’s controversial decision to strip the Muslim-majority region of its autonomy, Soura neighborhood on the outskirts of Kashmir’s main city of Srinagar has sealed itself off from security forces.

Kashmir has waged a three-decade-long armed rebellion against Indian rule with tens of thousands of lives, mostly civilians, lost in the conflict.

“They can only enter Soura over our bodies. We won’t give even an inch of land to India,” Mufeed, a resident who volunteers to guard the neighborhood at night, told AFP. “Just like Gaza is resisting Israel, we will fight for our motherland with all our might,” Mufeed added.

Kashmir has waged a three-decade-long armed rebellion against Indian rule with tens of thousands of lives, mostly civilians, lost in the conflict. Ahead of the announcement, India rushed tens of thousands of extra troops to the restive region to join 500,000 already in the valley and imposed a strict clampdown fearing further unrest.

But protests have broken out, with the lower-middle-class Soura leading the way. At least 15,000 people rallied on August 9 – the biggest demonstration in Kashmir so far. They were met by security forces firing live ammunition, tear gas and pellet guns to disperse the crowds, with more than two dozen people reportedly injured.

Young men sit beside a pile of rocks and a bonfire, protecting the only entrance to a besieged neighbourhood they call “Kashmir’s Gaza”

Soura, a crammed lakeside community of more than 2,000 homes, is surrounded by security forces on three sides. The renowned mosque Jenab Saeb has become an assembly point for thousands of protesters in the neighborhood.

Every night, residents march through its narrow lanes, carrying torches and passing graffiti with the words “Freedom for Kashmir” and “Go India, go back”. Locals pass along messages if they spot any police movement on the main highway just beyond Soura.

Read more: Calling Kashmir issue a territorial dispute is in itself dehumanizing?

Police forces, who have deployed drones and helicopters, tried to enter Soura at least three times but were pushed back by stone-throwing youth, some also armed with axes and harpoons. Familiar with police’s crowd-dispersing tactics, protesters use salt water to wash their faces after chilli and tear gas are fired, and wear helmets and glasses to protect themselves against pellets.

Three youths have so far been arrested after venturing out from the area. “They (India) are testing our resilience and they will definitely fail,” local Nahida told AFP. “We defeated them last time and even if this situation continues for years, we won’t give in.”

Despite the Soura protests, authorities stress that Kashmir has remained largely peaceful since the lockdown.

Soura has long been part of restive Kashmir’s history since the region was divided between India and Pakistan after independence from the British in 1947. It was the birthplace of Kashmir’s former prime minister Sheikh Abdullah, who agreed to join India as a state with autonomy rights.

Kashmir has waged a three-decade-long armed rebellion against Indian rule with tens of thousands of lives, mostly civilians, lost in the conflict.

His National Conference party – which has fought for more autonomy while being under Indian rule – ran the state for more than three decades, with his son Farooq Abdullah and grandson Omar Abdullah becoming chief ministers. Farooq and Omar Abdullah were detained by New Delhi as part of the lockdown.

Young men sit beside a pile of rocks and a bonfire, protecting the only entrance to a besieged neighbourhood they call "Kashmir´s Gaza" as a mosque loudspeaker broadcasts slogans of liberation.

Residents have become more anti-India in recent years. In 2016 when mass street protests broke out over the death of a popular Kashmiri commander, Soura was the scene of dozens of clashes with government forces. Soura resident Rafiq Mansoor Shah said many locals shared his misgivings about Abdullah’s decision to accede to India.

Under the new arrangements announced this month, Indians from other parts of the vast nation can now apply for government jobs and buy property in Kashmir. But many Soura natives like Shah believe New Delhi has “nefarious plans to grab our land”.

“Because of (the Abdullah family’s) greed for power, we have become slaves of India. We are trying to correct the historical mistake,” he told AFP. “We are trying to lead and inspire the rest of Kashmir.”

Previous articleSay bye to acne with these baking soda hacks!
Next articleRise of Polio cases: PM Khan to lead an anti-polio campaign himself

25 June 2021
Previous articleSay bye to acne with these baking soda hacks!
Next articleRise of Polio cases: PM Khan to lead an anti-polio campaign himself

US Senator says Biden’s ignorance towards Pakistan ‘a major disaster’!