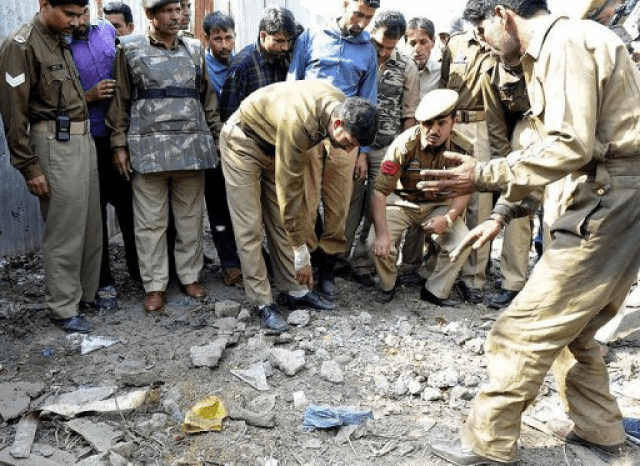 The Jammu and Kashmir police on Sunday registered an FIR against 58th Rashtriya Rifles unit for allegedly gunning down a cattle trader and injuring another person in Ramban district. The Army, however, said soldiers retaliated when they came under attack by the two, who were moving suspiciously near the Army establishment.

The deceased has been identified by cops as Mohammad Rafiq Gujjar (28). The injured, identified as Shakeel Ahmad (30), was admitted to hospital with bullet wounds. The two both cattle traders were allegedly fired upon by soldiers of the 58th RR unit when they were leaving Kohli village around 4 am, a police officer said. Gujjar died on the spot, while Ahmad was injured and admitted to the hospital, he added.

Indian army even took the reprehensible measure of tying up an innocent Kashmiri, Farooq Dar, to the bonnet of a jeep and paraded the streets of Srinagar, using hapless Kashmiri as a human shield.

Both cattle traders had come to the village in connection with their business, the police said, citing preliminary investigations. The police said no weapon was found at the encounter site or in the possession of the deceased. Ramban SSP Mohan Lal confirmed the death of a civilian and injuries to another in the Army firing. “An FIR under Section 302 (murder) and 307 (attempt to murder) of the Ranbir Penal Code and various sections of the Arms Act was lodged against the Army unit. Further investigation is on,” the SSP said.

However, a defense spokesperson said soldiers opened fire after their unit came under attack. “An operation was launched by the Army on specific intelligence inputs in Kohli area of Gool Tehsil in Ramban on August 5. At 3.45am, an Army patrol saw suspicious movements. On being challenged, suspected individuals opened fire upon the Army patrol and it retaliated,”defense spokesperson Lt-Col Devendra Anand said.

Read more: Killing people in the name of meat-politics in India?

The Tribal Research and Cultural Foundation, an organization representing Gujjars and Bakerwal communities, demanded a judicial inquiry into the killing. “The killing of a cattle trader and injuring another is highly condemnable which needs to be investigated thoroughly,” it said in a statement.

The two both cattle traders were allegedly fired upon by soldiers of the 58th RR unit when they were leaving Kohli village around 4 am, a police officer said. Gujjar died on the spot, while Ahmad was injured and admitted to the hospital

The youth was killed by Indian troops during a violent cordon and search operation in Khumriyal area of the district. The operation was going on till last reports came in. The Indian Army on 14 Nov 2015, convicted seven soldiers, including two officers, and sentenced them to life imprisonment for the staged killing of three civilians in Jammu and Kashmir in 2010. The service benefits of the seven convicted army men have also been suspended.

On April 30, 2010, three civilians Shahzad Ahmad Khan, Mohammad Shafi Lone and Riyaz Ahmad Lone of Nadihal, Rafiabad in Sopore were lured to work as porters for the army in Kupwara district. Instead, the army killed them in a fake encounter, applied black paint on the clean-shaven faces of the slain, placed weapons on them and said they had killed foreign militants.

It was later found out that they were the three civilians missing from Rafiabad. The staged killings, known as the Machil fake encounter case, became one of the important reasons for the 2010 mass protests in Kashmir, in which the Indian police and Central Reserve Police Force (CRPF) killed more than 120 young unarmed protesters.

India accuses Pakistan of fomenting trouble in the strife-torn Valley, although the freedom movement is homegrown and has become worse with the brutal assassination of young Kashmiri leader Burhan Wani last year on July 8. Since then, protests have snowballed in a massive movement. To suppress the Kashmiri youth, Indian forces have resorted to the use of pellet guns, which have martyred over 200 while more than 3,500 have been blinded by the cruel Indian military forces.

Indian army even took the reprehensible measure of tying up an innocent Kashmiri, Farooq Dar, to the bonnet of a jeep and paraded the streets of Srinagar, using hapless Kashmiri as a human shield. To rub salt in the wound, despite the protests of human rights activists, the perpetrator of the heinous deed, Major Nitin Gogol was praised and awarded by the Indian Army Chief and cited for gallantry.