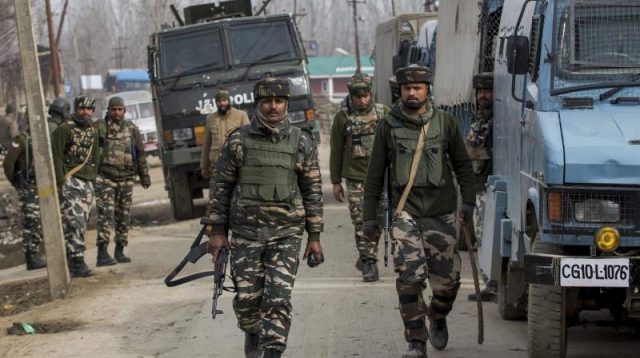 No group immediately claimed responsibility for the attack on the Border Security Force (BSF) base in the state capital of Imphal. However, dozens of tribal, nationalist and small rebel groups operate in the remote region near the Myanmar border.

A force spokesman told journalist that about a dozen paramilitaries were taking part in an operation to check roads outside the base when the improvised explosive device went off.

“Two of our soldiers were killed in the IED blast. The area has been cordoned off and investigations are on,” the spokesman added. In regard to this,  two paramilitaries were also injured on Tuesday after militants hurled grenades at another base in the city.

The explosion occurred at a Border Security Force post near the residence of the top elected official in Manipur state, but it was unclear whether he was the target, police officer K. Meghachandra said. The Northeast region is home to dozens of separatist groups that accuse the government of exploiting the area’s natural resources while doing little for the indigenous people. They often stage hit-and-run attacks as well.

The rebels say the local population is ignored by the federal government in New Delhi. Most residents are ethnically closer to groups in Myanmar and China than to the rest of India. Historically, the Northeast was never a part of India while attempts were made to assimilate it into the rest of India by different powers. The Mughals were briefly successful before relinquishing control in the face of guerrilla warfare by the local populace. The British were finally able to assimilate it into their Empire after defeating the Burmese and concluding the Treaty of Yandabo.

After the partition of Pakistan and India, the Northeast was made a part of India by the British. Many question the partition boundaries drawn by the Radcliffe commission who allegedly “drew borders in such a manner as to support British interests”. It, at that time, contained many different groups such as Assamese, Bodos, Bengali Muslims and others. Later on, it was further divided into modern day Assam, Nagaland, Meghalaya and Mizoram. This was done to fulfill “tribal aspirations”, however, it has not been enough to end campaigns for freedom from the Indian state by the people of that area.

While currently the whole unrest in the largest state of Assam has been blamed on the “illegal Bangladeshi Muslim immigrants”, the reality has more to do with government failure and the spread of Hindutva extremism. The initial conflict started not because of the much propagated “Muslim infiltration” but between Hindu groups over linguistics resulting in language riots in the 1960s. During the same period, India was using this same area to host, train and support terrorist elements known as the Mukti Bahini to wage cross-border terror attacks in former East Pakistan. Later on, the same area was used as a launching pad for the Shanti Bahini to destabilize the sovereign state of Bangladesh.

The Northeast has been the target of a brutal Indian pacification campaign with instances of atrocities like murders and rape becoming highly common. These atrocities have been complemented with the draconian AFSPA which allows Indian forces to act with impunity. There was a boycott of the first general election of 1952 which later extended to a boycott of government schools and officials. In order to deal with the situation, the Assam Government imposed the Assam Maintenance of Public Order (Autonomous District) Act in the Naga Hills in 1953 and intensified police action against the rebels.

When the situation worsened, Assam deployed the Assam Rifles in the Naga Hills and enacted the Assam Disturbed Areas Act of 1955, providing a legal framework for the paramilitary forces and the armed state police to crush dissent in the region. However, the Assam Rifles and the state armed police could not contain the Naga rebellion and the rebel Naga Nationalist Council (NNC) formed a parallel government, “The Federal Government of Nagaland” on 23 March 1956. The Armed Forces (Assam and Manipur) Special Powers Ordinance 1958 was promulgated by the President Dr. Rajendra Prasad on 22 May 1958. It was replaced by the Armed Forces (Assam and Manipur) Special Powers Act, 1958 on 11 September 1958.

Previous articleAlia Bhatt to bluff a Pakistani major in ‘Raazi’
Next articleExports increase yet the reserves are decreasing!

24 July 2021
Previous articleAlia Bhatt to bluff a Pakistani major in ‘Raazi’
Next articleExports increase yet the reserves are decreasing!