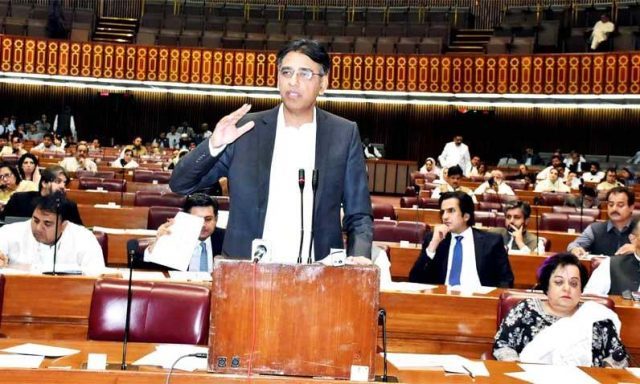 The representatives of Korangi Association of Trade and Industries (KATI) on Wednesday told the Pakistan Tehreek-e-Insaf (PTI) Chairman Imran Khan that PTI Karachi does not pay heed to their grievances. This is a disturbing revelation for PTI that is determined to clean sweep the whole country after the success of its accountability campaign.

This was expressed in a talk that the PTI leader was invited to, by the business community of Karachi. Former KATI president Rashid Ahmed Siddiqui told Imran Khan that Dr. Arif Alvi, the only elected PTI Member National Assembly (MNA) from Karachi, vanished after being elected and was not seen anywhere in the last five years.

The PTI’s significant decrease in the number of votes was evident in the NA-246 by-polls conducted in April 2015 and the local government elections held in December that year.

The PTI chief admitted that since he was focused on fighting a ‘mafia’, he could not pay attention to the civic issues of the city and that only an elected mayor can solve the issues of the city. He said that the importance of the city is undeniable as it is the financial hub of the country.

Read more: Imran’s reminder: Corruption is the only ideology of Nawaz

Imran Khan reached Karachi on Wednesday on a four-day visit. He is due to attend the party’s membership camp at Malir today and then address a workers’ convention at 5pm.

Karachi, once famously called the city of lights, has always had a geo political and socio economic significance. The city being, the largest and most populous in the country is the premier financial and industrial center of Pakistan.

Karachi, situated in the Arabian Sea, serves as a transportation hub and plays a significant role in mobilizing trade in the region through its two largest seaports, i.e, Port of Karachi and Port Bin Qasim and one of the busiest international airports of the world. The city has also been declared beta world city along with Berlin, Geneva, and Abu Dhabi due to its moderate links to the world economy.

Being the wheel runner of Pakistan’s economy at large, it contributes to the largest amount of tax collection, i.e. 62.4% from the year of 2000 to 2012. Approximately 25% of Pakistan’s national revenue is generated in Karachi. The city also has an informal economy, which is not typically reflected in GDP estimate and it may constitute up to 36% of Pakistan’s total economy. Majorly depending on its industrial zones, Karachi is home to some of the country’s largest companies dealing in textiles, cement, steel, chemicals, machinery and food products.

It is home to major civil society and welfare organizations such as Chhipa Welfare, Saylanis, Alamgir welfare trust, the Aga Khan network, Fatmid trust among others. The civil society is also particularly strong in the city with organizations such as Ansar Burney trust, Aurat Foundation, Karachi relief Trust etc. The city has produced Pakistan’s legends in art and literary scenes some prominent names include Moin Akhtar, Anwar Maqsood, Nazia Hassan, Bushra Ansari etc.

Since late 2011, PTI has enjoyed a wave of popularity in the city and has also succeeded in securing significant numbers of votes from the Muttahida Qaumi Movement’s (MQM) traditional constituencies, especially in District Central. PTI has emerged as the second largest political force in the city – posing a threat to the MQM, which bagged the majority of seats in Karachi.

According to the recent election results, PTI candidates gave a tough time to their opponents in the majority of Provincial and National Assembly seats. Officials of the election commission admitted that PTI obtained the second number in terms of votes cast. This, in itself, was a significant change from previous elections as the PTI managed to get up to 30,000 votes in the Pakistan Peoples Party (PPP) stronghold of Lyari and the MQM’s home constituency Azizabad.

But after the 2013 polls, Imran Khan did not concentrate on Karachi’s politics or PTI’s organisational structure in the city, restricting the party’s focus on the claims of rigging in some constituencies of Lahore and demanding re-elections, and then the Panama Leaks.

The PTI’s significant decrease in the number of votes was evident in the NA-246 by-polls conducted in April 2015 and the local government elections held in December that year. Overcoming the turmoil besetting the MQM after splitting away from party founder Altaf Hussain as well as some of its members defecting to the Pak Sarzameen Party, the renamed MQM-Pakistan won the by-elections for most of the city’s union committees this April, but PTI could not even field candidates for the polls.

NLC & CPEC: A partnership of progress