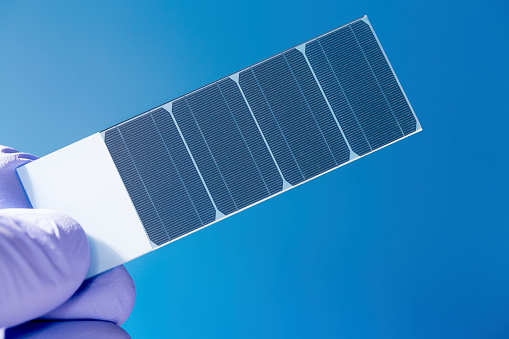 What if one day all buildings could be equipped with windows and facades that satisfy the structure’s every energy need, whether rain or shine? That sustainability dream is today one step closer to becoming a reality thanks to Polish physicist and businesswoman Olga Malinkiewicz.

The 36-year-old has developed a novel inkjet processing method for perovskites — a new generation of cheaper solar cells — that makes it possible to produce solar panels under lower temperatures, thus sharply reducing costs. Indeed, perovskite technology is on track to revolutionise access to solar power for all, given its surprising physical properties, some experts say.

What if one day all buildings could be equipped with windows and facades that satisfy the structure’s every energy need, whether rain or shine?

“In our opinion, perovskite solar cells have the potential to address the world energy poverty,” said Mohammad Khaja Nazeeruddin, a professor at Switzerland’s Federal Institue of Technology Lausanne, an institution on the cutting-edge of solar energy research.  Solar panels coated with the mineral are light, flexible, efficient, inexpensive and come in varying hues and degrees of transparency.

They can easily be fixed to almost any surface — be it laptop, car, drone, spacecraft or building — to produce electricity, including in the shade or indoors.   Though the excitement is new, perovskite has been known to science since at least the 1830s, when it was first identified by German mineralogist Gustav Rose while prospecting in the Ural mountains and named after Russian mineralogist Lev Perovski.

In the following decades, synthesising the atomic structure of perovskite became easier. But it was not until 2009 that Japanese researcher Tsutomu Miyasaka discovered that perovskites can be used to form photovoltaic solar cells.

Initially, the process was complicated and required ultra-high temperatures, so only materials that could withstand extreme heat — like glass — could be coated with perovskite cells. This is where Malinkiewicz comes in. In 2013, while still a PhD student at the University of Valencia in Spain, she figured out a way to coat flexible foil with perovskites using an evaporation method.

That sustainability dream is today one step closer to becoming a reality thanks to Polish physicist and businesswoman Olga Malinkiewicz.

Later, she developed an inkjet printing procedure that lowered production costs enough to make mass production economically feasible. “That was a bull’s eye. Now high temperatures are no longer required to coat things with a photovoltaic layer,” Malinkiewicz told AFP.

Her discovery quickly earned her an article in the journal Nature and media attention, as well as the Photonics21 Student Innovation award in a competition organised by the European Commission. The Polish edition of the MIT Technology Review also selected her as one of its Innovators Under 35 in 2015.

She went on to co-found the company Saule Technologies — named after the Baltic goddess of the sun — along with two Polish businessmen.  They had to assemble all their laboratory equipment from scratch before multimillionaire Japanese investor Hideo Sawada came on board.

The company now has an ultra-modern laboratory with an international team of young experts and is building an industrial-scale production site. “This will be the world’s first production line using this technology. Its capacity will reach 40,000 square metres of panels by the end of the year and 180,000 square metres the following year,” Malinkiewicz said at her lab.

In 2013, while still a PhD student at the University of Valencia in Spain, she figured out a way to coat flexible foil with perovskites using an evaporation method.

“But that’s just a drop in the bucket in terms of demand.” Eventually, compact production lines could easily be installed everywhere, according to demand, to manufacture perovskite solar panels that are made to measure.

Read more: Government plans to cut down Solar battery prices to save environment

The Swedish construction group Skanska is testing the cutting-edge panels on the facade of one of its buildings in Warsaw. It also inked a licencing partnership with Saule in December for the exclusive right to incorporate the company’s solar cell technology in its projects in Europe, the United States and Canada.

“Perovskite technology is bringing us closer to the goal of energy self-sufficient buildings,” said Adam Targowski, sustainability manager at Skanska. “Perovskites have proven successful even on surfaces that receive little sunlight. We can apply them pretty much everywhere,” he told AFP.

“More or less transparent, the panels also respond to design requirements. Thanks to their flexibility and varying tints, there’s no need to add any extra architectural elements.” A standard panel of around 1.3 square metres, at a projected cost of 50 euros ($57), would supply a day’s worth of energy to an office workstation, according to current estimates.

Read more: From oil to solar power: Saudi Arabia plans a shift to…

Malinkiewicz insists that the initial cost of her products will be comparable to conventional solar panels. Perovskite technology is also being tested on a hotel in Japan, near the city of Nagasaki.

Plans are also afoot for the pilot production of perovskite panels in Valais, Switzerland and in Germany under the wings of the Oxford Photovoltaics venture. “The potential of the technology is clearly enormous,” Assaad Razzouk, the CEO of Singapore-based Sindicatum Renewable Energy, a developer and operator of clean energy projects in Asia, told AFP.

“Just think of all the buildings one could retrofit worldwide!”

Shahzeb murder case sent back to ATC by the Supreme Court